The Queen is dead, the big questions aren’t 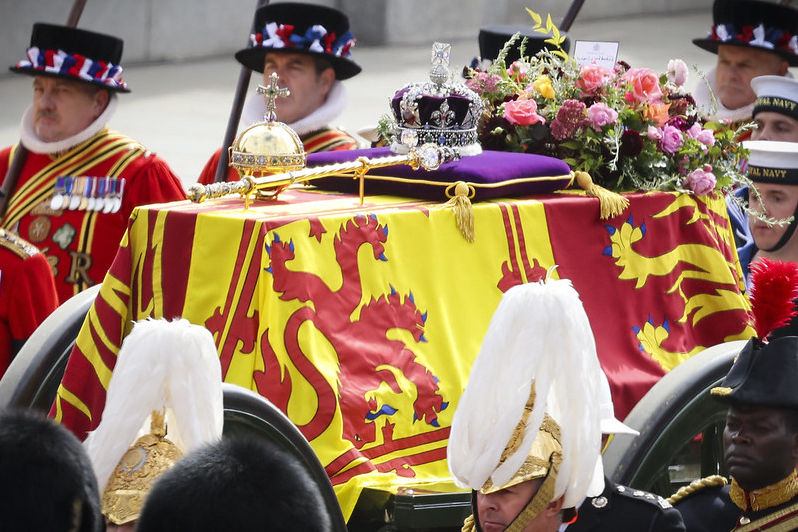 Will the Queen’s death prompt meaningful debate about Australia’s colonial past and its republican future? I fear not. Too often we do the talk much better than the walk.

In an oft-quoted speech in 1947, then Princess Elizabeth promised to devote her life, “long or short” to the service of “our great imperial family”. She delivered those words while on royal tour to one of the “family” members, South Africa. A year later that country became the evil heart of apartheid. Nonetheless, it remained a British colony until 1961. By then, Elizabeth, on another royal visit to Africa had gone to sleep “a princess and awoke a Queen” when King George VI died in 1952.

At the height of Britain’s imperial power in the early twentieth century it ruled a quarter of the world’s land surface and about the same percentage of its peoples. Despite the best, and violent, efforts of its protagonists, the empire was in serious decline when Elizabeth came to the throne. She presided over its utter demise.

That could/should have been her greatest achievement and a cause for grand celebration—except that the end of empire owed little to idealism or magnanimity on the part either of British royalty or government. The empire collapsed under the weight of its ruthless exploitation, its racism, extraordinary double-standards and raw violence. Many of its subjects paid for their eventual freedom in blood — think, for example, of India, Pakistan and Kenya.

Richard Stengel, who served as Barack Obama’s under-secretary of state for public diplomacy and public affairs, was hardly alone in criticising the overblown, forelock-tugging media coverage of the Queen’s funeral. British colonialism over which she presided, he wrote, had “a terrible effect on much of the world”.

For much of Elizabeth’s long reign, British royalty and commoner alike were largely unwilling to acknowledge that effect. In 1952, the year Elizabeth woke up in Kenya as Queen, colonial authorities there launched a vicious campaign to suppress the Mau Mau rebellion against British rule. This involved, in the words of Maya Jasanoff, a Professor of History at Harvard University, the rounding up of tens of thousands of Kenyans into detention camps and subjecting them to “brutal, systematised torture”.

We can only ponder what the Queen thought about the court case in London 70 years later brought against the British government by survivors of that torture. Paradoxically, those survivors would have cause eventually to thank British justice. On 6 June 2013, the foreign secretary, William Hague, announced that 5,228 Kenyans would each receive about £3,800 (A$6,000). The British government, Hague said, recognised that they had been “subject to torture and other forms of ill-treatment at the hands of the colonial administration”.

A reluctant, tawdry concession. Even so, it was not the British government’s preferred outcome. With breath-taking hubris it had argued that liability for then well-documented abuses by British colonial officials had devolved to the Kenyan government upon independence in 1963. The presiding judge dismissed this argument as dishonourable. One academic described the outcome of the case as a “profound” rewriting of history—the first time that Britain had admitted carrying out torture anywhere in its former empire.

In 1997, Prime Minister Tony Blair said the empire should be the cause “neither of apology nor hand-wringing”. That same year the Queen and Prince Phillip visited Amitsar in India where, in April 1919, colonial troops under General Reginald Dyer had shot dead hundreds of unarmed civilians. Dyer apparently saw them as a threat to imperial authority. Remarkably, in 1920, Winston Churchill—no imperialist slouch—described the killings as “monstrous”. Eighty years later the best Elizabeth could offer about Amritsar was to note, “it is no secret there have been some difficult episodes in our past. Jallianwala Bagh [the actual site of the massacre] is a distressing example”. Phillip, at his ever-sensitive best, reportedly suggested the casualty figure were vastly exaggerated. The official death toll was 379, the unofficial many hundreds more.

As the Empire withered, Elizabeth became a champion of the “Commonwealth of Nations”. Originally an all-white club, the high-point for this collection of one-time British imperial possessions came during the long and at times violent struggle against apartheid. No one these days could seriously suggest the Commonwealth has great relevance or clout internationally, even if some of its 50-plus members think it useful cover for what one expert has termed “reputation laundering”. The Africa Report commented that the Queen’s death should end the era of “commonwealth romanticisation”.

Pageantry and sentiment will of course persist, the British can turn on a show like no one else. Bizarrely, the British honours system still references the “empire”, though some medal recipients are now trying to replace that word with “excellence”. Watching the recent funeral-without-end it was hard not to wonder what good all those funds and brain cells might have achieved if they had not been consumed in such meaningless splendour. The distinguished Australian author, Richard Flanagan, wrote that coverage of the funeral resembled the “official lamentations more commonly associated with the passing of totalitarian leaders, in equal parts insincere and increasingly ludicrous. The ABC had made a national embarrassment of itself with its ongoing and inexplicably grovelling coverage.”

We lie to ourselves, Flanagan argued “when we indulge in a mass hysteria proclaiming that at the centre there is something greater than ourselves”. He recounted meeting the Queen after he won the Commonwealth Writers Prize and discovering that at the head “of a vast historical system of injustice and inequality there was to be found only a little old lady”.

That little old lady is no more. Australia should now grasp the opportunity to ask big questions of itself. Not what sort of country it is but what sort of country it can and should be. When Elizabeth came to the throne, Australia’s population was “about” 8.6 million. About is the operative word because Section 127 of the Constitution required that “In reckoning the numbers of the people of the Commonwealth, or of a State or other part of the Commonwealth, aboriginal natives shall not be counted”. That obscene edict would not be rectified until the 1967 referendum.

Australia’s population now hovers around 26 million people, less than 60 per cent of whom are of European origin. We have come some way from Governor Macquarie’s 1816 order that all Aborigines “from Sydney onwards are to be made prisoners of war. If they resist they are to be shot and their bodies hung from trees in the most conspicuous places.” Too often though we are reminded of the thick seams of ignorance and bigotry that still lie within us. Think only of the recent allegations involving the Hawthorn football club.

Our white history is just one part of a much bigger story we have all yet to read, let alone embrace. Writing about the Queen’s funeral, Stan Grant commented: “This past week, I have been reminded what it is to come from the other side of history. History itself that is written as a hymn to whiteness … written by the victors … often in blood.”

We keep telling ourselves and the world we are a courageous, can-do lot. Why then are we so frightened of acknowledging truths about our colonial and post-colonial past? Truths we must have to prepare us for a genuinely diverse yet common republican future.

Peter Rodgers is a former Australian diplomat, award-winning journalist, and the author of six books. He is currently writing a novel set around a small NSW country town whose inhabitants are forced to confront the past.