The Queen nails it at Glasgow, Scott Morrison does not 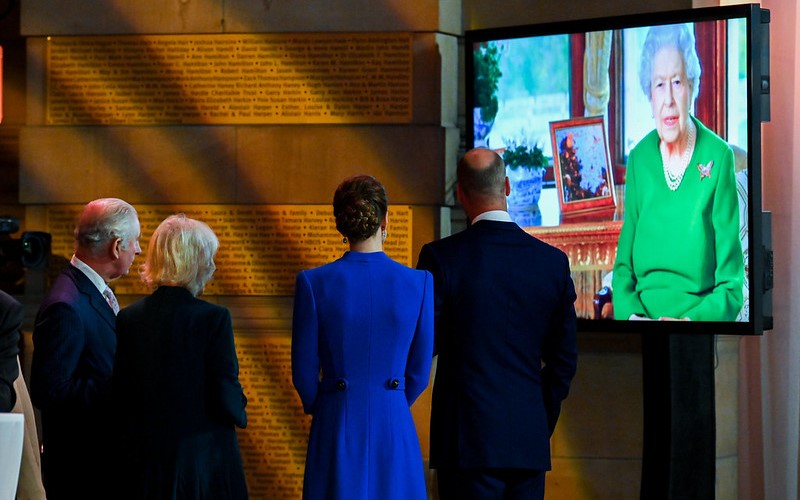 The Queen hit the right notes in her speech to COP26 in Glasgow. (Image: Flickr/COP26)

Scott Morrison could learn from the Queen’s speech at COP26 in Glasgow. This is the speech he should have given.

“For more than 70 years, I have been lucky to meet and to know many of the world’s great leaders. And I have perhaps come to understand a little about what made them special,” the Queen said. “It has sometimes been observed that what leaders do for their people today is government and politics. But what they do for the people of tomorrow — that is statesmanship.

The Queen made it clear that the magnitude and urgency of the climate challenge eclipses all other challenges.

There are people of statesmanlike calibre at Glasgow, they include David Attenborough, Greta Thunberg, and Secretary General Antonio Guterres. Highly respected statesmen like leaders such as the Queen and Pope Francis have delivered messages of substance to the conference. Leaders of industry such as our own Andrew Forrest, present at the conference, are contributing to the future in a courageously statesman like manner through significant investment.

This is the speech I would have expected to hear from our prime minister:

In the course of human history there have been moments when the actions or inactions of present generations have shaped the future for all succeeding generations. This is such a moment. Stay as we are, and future generations will not experience the freedoms and qualities of life we and recent generations have taken for granted. Unchecked release of fossil fuels in the form of carbon dioxide and methane gas, will trap more heat causing hitherto unexperienced change to the environment, and severe damage to human health, biodiversity, and a viable global economy.

I do not wish in any way to minimise the depth and extent of the challenge that lies ahead. We must and will play our part with the rest of the world community. However, I want also to say there is no need to feel foreboding. Indeed, foreboding will only nurture paralysis. We can and will transition from one economic system to another and in the process enjoy an improving natural environment and discover human values that simply exceed the contemporary ubiquitous desire for accumulated material wealth.

Here in Australia, we face a wicked short-term problem. We are currently one of the globe’s greatest miners and exporters of fossil fuels in the form of coal and gas. We cannot stop this mining immediately, but it must be brought to an end. Many countries rely on us for energy. Exporting fossil fuel has become a significant part of our economy. The industry employs thousands of workers who must be transitioned to other employment. I wish however to make the following clear. No new fossil fuel licenses will be granted, and no new coal or gas fired generators will be built. The government will not be investing any money in fossil fuel carbon sequestration schemes which, even if technically possible — which is exceedingly doubtful — will never be able to compete economically without subsidy. As a matter of urgency, the government will incentivise the development of green hydrogen, both as an exported energy, but also for the upscaling of Australia’s lagging or disappearing industries. We will not support the production of blue hydrogen at scale. The government will support private industry investment which will transition iron ore exports to domestic steel production, thus greatly enhancing our economic future. The government will prioritise these industries in areas currently given over to coal mining. By 2030 we expect many of these new industries to be in production, thus enabling the closure of many existing coal mines and the transitioning of their employees to new and sustainable employment.

My government will support schemes that enable the less affluent sector of our community, including residents of social housing to either generate and store their own solar energy or become part of a local mini-grid. Owners of rental properties will have a three-year lead time before the provision of solar energy generation will be mandatory, the capital cost being offset through current negative gearing provisions. My government will insist the national grid is significantly upgraded to meet the needs of decentralised 21st century power generation.

My government will do all within its power to make ownership of electric vehicles possible for the majority of the population before the end of the decade. The commonwealth vehicle fleet will be transitioned from fossil fuel to electrification as soon as possible. This will necessitate working with the states and local government to ensure an adequate spread of re-charging stations. It is my hope that by the end of this decade the majority of Australians will not only own an electric powered vehicle, but that they will have the capacity to charge it from solar generation at home. All fossil fuel subsidies will be phased out in the term of the next government.

Australia has a vast agricultural capacity and as we know our farmers are some of the most efficient and productive in the world. It is sadly the case that climate change with extreme weather events and droughts is already severely impacting lives and livelihoods. This threat will accelerate into the future. With some urgency, my government will work with the farming community in the development of technologies which reduce emissions. At the same time, we wish to expand agricultural sequestration and in the process increase soil productivity. We will work with farmers to increase vegetation, especially trees. We will work with the states in assisting all primary producers in the annual measuring of emission reductions either through sequestration or through technological adaptation.

Some essential industries are high emitters. My government will work specifically with industries such as concrete manufacture and aluminium smelting on technologies which will assist their adoption of new methods.

I am confident that if we all work together, share ideas and resources, and remove political ideology and grandstanding from debate and conversation it will be within our grasp to reach a 50 per cent reduction in emissions by 2030.

My fellow Australians, the opportunities are as vast as the challenge is daunting. We cannot afford to fail. To delay is to fail. It is an exciting time, made so by the focus every one of us needs to give, ensuring we all play our part. It is correctly said, we contribute a small fraction of global emissions, but it is also true that per head of population we emit more than most. It is crucial we encourage others by the example we set. We have more to gain than most from the transition ahead, equally we have far more to lose than most if as a global community we fail.

My pledge to you all is that on my watch political grandstanding and wedging will cease. This is a challenge to all humanity to rise to our better selves and so become the stewards of our grandchildren’s future on the only home we all share — planet Earth.