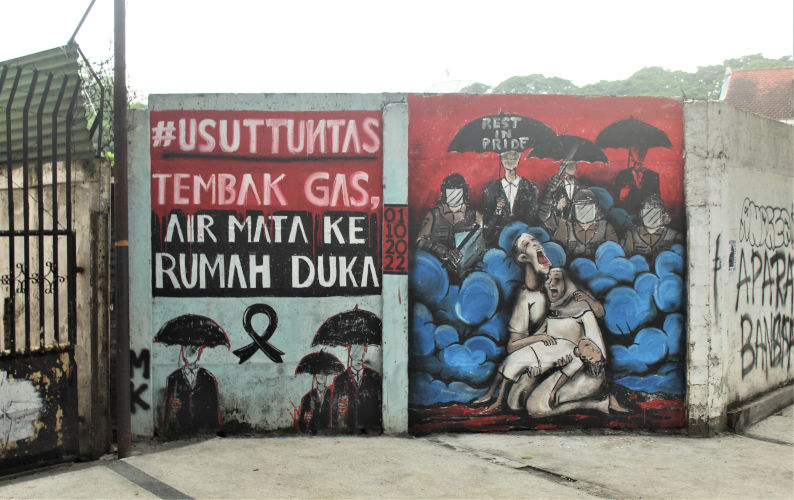 The most widespread slogan stencilled on the Indonesian city’s walls, scrawled on posters, splashed on bedsheets in red and draped from powerlines and bridges is Usut Tuntas.

The formal translation – investigate thoroughly – doesn’t carry the raw anger and pent-up mix of distress, impotence and fear which hang like a radioactive cloud over the Central East Java hilltown of Malang that’s lost 131 sports fans in one suffocating and avoidable tragedy.

The police marshal traffic, bunch together, avoiding eye contact. They’ve chosen not to rip down the homemade signs, fearing to antagonise. In any case, there are too many. The slogans are often in English, scrawled savagely: F… the cops, we hate you.

The blame game is underway. The messages are blunt, the implications deadly. The cops are the crims.

Older Indonesians know of terror times. In the early 1980s, the government’s solution to thug power was penembak misterius (mysterious shooters). The words were squashed into Petrus, a new term for dread.

Army death squads and snipers worked overnight, leaving the corpses on the streets to intimidate come dawn. The policy of extrajudicial killings worked, though hundreds – maybe thousands – died before the police could regain control.

This month authorities knew there’d be strife at the soccer game between Malang’s Arema and its bitter rival Persebaya from the provincial north-coast capital Surabaya.

They expected a bit of biffo because not all are drawn by the beautiful game. Turbo-charged hormonal youths keen to show off find sports grounds good for their theatre. The crowds are mostly lads, for in this culture the easy intermingling of the sexes remains rare.

Indonesian has pinched and warped hundreds of English words like ekonomik, politik and teknologi. Reverse contributions are few. The standout is amuck, which is what happened on Saturday 1 October when the visitors won the Premier League event 3-2 and the locals turned feral because Arema had been top dog for the past 23 years.

Although gambling is illegal, betting on games is commonplace and scores are allegedly often settled before kick-off, such is the corruption.

The death toll of 131 and more than 500 injured makes this the world’s second-largest soccer disaster after the 1964 Peru stampede which killed 328. Police also used tear gas and fans were squashed to death at the gates.

The 1989 Hillsborough stadium crush in the UK killed 97 and caused 766 injuries. Officials tried to blame hoons, but an inquiry eventually found police and ambulance services failed their duty of care.

That’s the result expected from examinations of the Malang catastrophe, though whether that will lead to real change is doubtful. The incompetence of the organisers is already clear.

So far there are six publicly named suspects, match organisers and officers. The probe is being run by the police, whose image has already been bashed by gross scandals as this website has reported, so will have negligible credibility.

The location was the Kanjuruhan stadium – blunder one, for this is Arema’s HQ. A neutral arena in another city would have been smarter.

The ground held 38,000. Four thousand more tickets were sold, and if anyone thought this urge for more money might strain facilities and personnel, they didn’t speak up. Mistake two.

Where were the casualties? Reports are contradictory. Were the gates open, or was the gap too narrow to handle a surging crowd fleeing tear gas? Flaw three: The nerve agent is prohibited by world soccer’s governing body FIFA, the Federation Internationale de Football Association.

It also condemns the use of riot gear that police wore at Kanjuruhan.

High fences to protect players and wide exits are essential in all stadia, a basic that architects and construction engineers learn in first-year uni, but ignored here. Error four.

It was held on the first Saturday of this month and at night. Gaffe five. The police wanted it scheduled in the afternoon. They were overruled by the organisers. In most countries the police would have the final say.

To its credit, the ABC sent a TV crew to Malang. Other media covered from afar – one Australian report from Bangkok as though an Asian dateline bestows authenticity for a geographically illiterate readership. Darwin and Perth are closer.

Health and safety in Indonesia are in the same era they occupied in Australia before unions successfully pushed for federal legislation to ensure public buildings are safe for all users.

Tragedies like Kanjuruhan will be repeated unless President Joko Widodo’s orders for an audit of stadia are bulldozed through all obstacles, commercial, political and bureaucratic.

A headline in The Conversation said it clumsily but accurately: Indonesia is where the authority is not the solution, but the problem.

This truism Robbie Gaspar knows well. The President of the Perth-based Indonesia Institute who was once an international professional soccer player including seasons with a local team in Malang, said ‘the sad thing is, this could have been prevented.

‘While Indonesian football has grown so much over the last few decades, investment, infrastructure and the authorities’ relationship with fan groups sadly haven’t progressed.

‘I hope Indonesian football can properly review what went wrong and why … My hope is that from now on, no one goes to a game in Indonesia and experiences violence, unsafe infrastructure and loses their life because of a football match.’

Hear, hear. But the deeper concern is that these fears aren’t confined to soccer. They’ll be on the loose, prowling our streets if the current fury against the police goes unaddressed.