The rub of the (very) green at the ‘Gabba 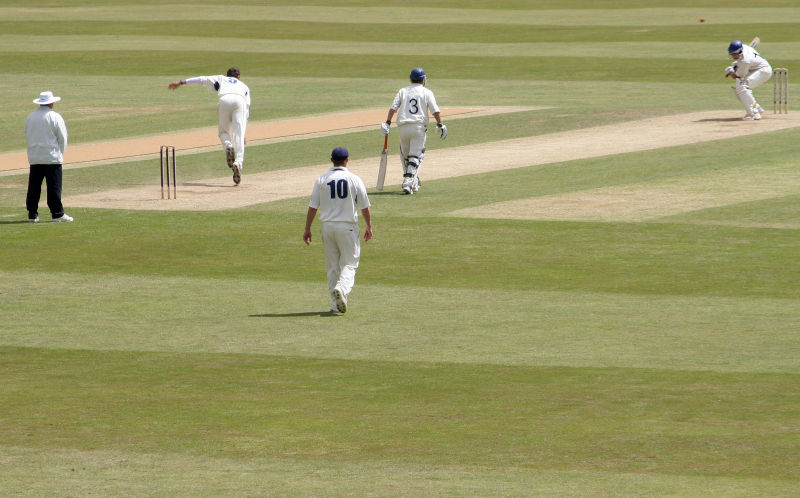 “It’s not cricket” is a term that originates from the idea of the importance of fairness. In the first cricket Test against South Africa we’ve just seen a case of alleged lack of fairness, of a kind, demonstrated at the ‘Gabba in Brisbane.

Cricket is never far from controversy. There was the ‘Bodyline’ Ashes series during the early 1930s, the ‘chucking’ and ‘dragging’ controversies of the 1950s and 1960s and decades of concerns about umpiring integrity being undermined by bias on the part of ‘home-country’ umpires. Now, the fitness of pitches is front and centre in commentary about cricket. All of these matters have in one form or another been about fairness, or reasonableness of conditions and behaviours in the game.

They have also been issues which forced the game’s ruling body to intervene and make changes to proceedings. In the case of umpiring integrity, after persistent allegations of home-country bias, the International Cricket Council brought in ‘independent’ (third-country) umpires during the 1990s. Then, in 2008, television replays using ball-tracking measures were introduced to check umpires’ decisions and ensure as far as possible that they were ‘correct’ as judged by objective evidence.

With pitch preparation, it has long been argued by Australian players that wickets in India were prepared with India’s strength in spin bowling firmly in mind. Australian pitches, it was felt by Indians, favoured the local strength in fast bowling. Resentment was felt on both sides, and it became ingrained: pitches were routinely felt to be prepared with an in-built bias toward the home team. There were dark mutterings about conversations in which home captains allegedly gave ‘instructions’ to curators before a game, but there was also a sense in which the situation was seen as a legitimate norm, indeed part of ‘home-ground advantage’. Home wins, after all, helped to ensure crowd interest and therefore attendance.

In all this there was a tacit acceptance of a less-than-perfect standard of sporting integrity.

The problem was not confined to India and Australia, of course. In England and elsewhere the perception of bias in pitch preparation bubbled perpetually below the surface. The idea arose, as a consequence, that to counter pitches being prepared to suit the home side the visitors should be given the option of choosing whether to bat or bowl first. This notion has been trialled in county cricket in England but never in Tests: there is too much tradition and excited anticipation ahead of the toss decision to have the toss of the coin dispensed with at the game’s top level.

There was another issue, too, which was the perception that the quality of the cricket offered could be negatively affected if pitches were not prepared in ways that ensured a genuine sense of ‘contest’ between bat and ball. In that contest, both batting and bowling must have a genuine say in proceedings. The ‘personalities’ of pitches are central in this matter.

What transpired at the ‘Gabba last week had nothing to do with any notion that the pitch was prepared to suit the home side. But it was nevertheless the latest of several matches over recent years in which the conditions could be called either unreasonable or unfair. The Brisbane pitch was lively from the start: much attention was paid to its rich green colour (itself a matter of no importance but a visual reflection of things that did matter), and then to the degree to which the ball moved in both the vertical and horizontal planes. From the outset some balls made indentations and took small amounts of grass and soil from the surface, rendering it slightly uneven. As the preparation moisture declined, the pitch seemed to harden under the Brisbane sun and the deviations in the ball’s path became, if anything, more marked. Inconsistency in steepness of bounce appeared to increase, too.

Not that there was anything ‘extreme’ about the ball’s behaviour, and batters were not struck to any unusual degree. The surface was a difficult one for batters, some of whom thought it was the most challenging they had ever performed on. But the difference in the attitudes of the two captains was revealing: Dean Elgar, the South African leader and opening bat, wondered aloud to the umpires whether the pitch was “unsafe” to bat on, while his counterpart (Pat Cummins, a fast bowler) thought it was quite reasonable. Cummins thought it “tricky” for batters, but not dangerous.

The two men’s positions reflected their points of view as players with different roles and as winner and loser. Elgar failed twice with the bat and was on the losing side, Cummins took seven wickets at low cost and led his team to victory. Unsurprisingly, Cummins was the happier man at the end.

This was, without doubt, an unusually compelling Test match to watch. But the conditions undeniably advantaged bowlers over batsmen. ‘Balance’ between bat and ball, central to the sense of a ‘fair’ cricketing contest, was lacking. Probably, the curator had left a little more moisture in the soil at the start than was ideal and the pitch was thus not rock-hard; hence the dents and divots which made it less even as the game proceeded and created occasionally extravagant up and down and sideways movement on the part of the ball.

Richie Richardson, the match referee and a former West Indies captain, concluded in his match report that there was “occasional excessive seam movement”. He did not think the conditions were dangerous, but he noted that the pitch did not facilitate “an even contest between bat and ball”.

The ICC was quickly onto the matter as it had been two weeks previously when a Test pitch at Rawalpindi, in Pakistan, was similarly deemed to have not provided appropriate balance. There, though, the problem was the opposite of the one seen at the ‘Gabba: batters had it too easy on a lifeless pitch and seemingly could do as they pleased. Bowlers had little influence, because (as match referee Any Pycroft had it), the pitch “provided almost no assistance to any type of bowler”. The Chairman of the Pakistan Cricket Board, Ramiz Raja, called the wicket “embarrassing”.

Both Rawalpindi’s and Brisbane’s pitches were deemed, on application of the ICC’s guidelines by which pitch performance is gauged, to be of ‘below average’ quality. One was too batting-friendly, the other favoured bowlers to an undesirable degree; thus balance was lacking. Each was given a demerit point. Had they been rated as ‘poor’ or ‘unfit’ they’d have been given additional demerits. Collecting several of these would be a severe embarrassment and a threat to a curator’s continuing employment because it would threaten a venue with suspension from hosting Tests.

There are other problems associated with ‘unfair’ pitches, too. The financial ramifications of an intended five-day game being over in less than two days, as Brisbane’s was, could not be countenanced by administrators and broadcasters if it became the norm. Likewise run-sated Tests, especially if they produced draws as standard results, would be undesirable because spectators would be deterred. As it happens, the Test at Rawalpindi was not drawn though for a long period that appeared to be its most likely outcome.

Elsewhere, there have in recent times been a number of tall-scoring Tests around the world in which few wickets have fallen, and pitches have been found complicit and given demerits. With Tests competing with T20 cricket for spectator and viewer allegiance, pitches biased strongly toward either batters or bowlers are something the long-form game cannot afford.

Where does all this go? Nobody wants ‘homogenised’ pitches. Variations in pitch character from venue to venue are integral to the charm of cricket and to anticipation of a coming game. Likewise everyone accepts that pitch character will and should change over the course of several days’ play, bringing different skills and strengths to the fore. What’s needed is interesting variations between venues and during matches, but without extremes in ball behaviour. We’ve long had such variations in Australia, with Perth’s traditional pitches fast and bouncy, Melbourne’s and Brisbane’s favouring seamers, Sydney’s often spinner-friendly and Adelaide’s usually good for scoring runs.

Providing a stage on which the players can perform and the interests of spectators, broadcasters and administrators can all be satisfied is a huge challenge. Meeting that challenge involves an understanding of the relationships between soil, grass and water on the one hand and the behaviour of a cricket ball on the other, as well as an understanding of the ways those relationships can change over the course of a match lasting several days. There is science and art in pitch preparation, but also much guesswork in the judgements that have to be made about the promotion of grass growth, the mowing regime adopted, the application of water and the time devoted to rolling.

It is not possible to mandate perfection in the outcome, and it would be impossible even if we could codify what perfection involves. But the health of Test cricket requires that the influence of pitches on play be carefully monitored, as the ICC seeks to do.

Chas Keys is a former academic and emergency management practitioner and an occasional writer on cricket.