The unspoken lesson from the government’s climate modelling

The government’s modelling leaves some legitimate concerns unanswered, but it does suggest a more ambitious emissions reduction target for 2030 is viable.

The good news from this modelling is that “Australia can achieve very significant reductions in net emissions while continuing to enjoy strong economic growth and rising national income”.

Compared with a “No Australian Action” scenario, national income is forecast to be 1.5 per cent higher or an extra $1000 per person by 2050 — not a huge difference as it represents less than six months growth after 30 years. Interestingly, almost all this potential benefit comes from the creation of a new cost-competitive global hydrogen sector which could lift national income by about that $1000 per person.

Jobs and output are projected to grow across all major sectors to 2050, including mining, with all major export sectors growing to 2050. In total, over 100,000 new direct jobs could be created in export and domestic sectors by 2050 under the advanced technology scenario. Net regional employment in mining and heavy industry alone could grow by 62,000 — or around 76,000 when renewables for hydrogen production is included.

Within the mining sector, however, the value of coal mining is projected to fall by 50 per cent by 2050, and will be entirely dependent on exports, as coal will have been phased out as a source of domestic electricity in the 2040s. Even that projection is probably too optimistic, as the International Energy Agency expects that a global move to net zero emissions by 2050 would result in global coal demand falling from more than US$400 billion today to less than US$50 billion by 2050.

Either way, Scott Morrison’s comment on Monday that “all of those working in the coal industry will be working in that industry for decades to come” is hopelessly wrong and yet another example of his penchant for deception.

But the good news for mining is that there will be other new jobs that the coal miners could redeploy to with assistance. According to the modelling, producing and exporting the minerals needed for clean energy technologies like cobalt, copper, lithium, nickel, uranium, and rare earth elements could support up to 52,000 new jobs nationally.

In sum, carbon reduction does not have to come at a cost to the economy and jobs. But in that case, a legitimate although unanswered question is: why exactly won’t the government accelerate the timing of carbon reduction as the rest of the world is demanding?

So much for the good news. There are, however, some key concerns that the modelling fails to address, probably because the government didn’t want it to, and these concerns are discussed below.

The immediate reaction of those people who are most concerned about the threat of climate change was to point out that in fact the modelling does not actually get Australia to net zero emissions by 2050.

Under “the plan”, Australia’s gross emissions fall to between 25 per cent and 35 per cent of their 2005 level by 2050. Yet unknown technological advances remove a further 15 per cent, and the rest of the path to net zero is provided by the purchase of emissions offsets.

In addition, these emission offsets assume that the domestic offsets will cost $24 per tonne, and the foreign ones $40 per tonne. However, how these assumed prices were derived and why businesses would voluntarily pay these prices without mandates, taxes or subsidies is not explained.

In short, the modelling does not really achieve its main purpose to show convincingly how Australia can achieve net zero emissions by 2050. Instead, Morrison’s vaunted net zero emissions target remains yet another of his marketing ploys, and is he really committed to this target.

The costs of climate change are missing

A major omission from the modelling is that there is no consideration of the costs of climate change and the benefits of limiting global warming as much as possible. We know that climate change will involve more floods, droughts, and bushfires, but the impact of these catastrophic events on economic growth and its composition is ignored in the modelling.

This is not only a concern in its own right; it also means that this modelling results in a very biased assessment of the costs of avoiding climate change. If different scenarios had been presented comparing the impact on climate change, and thus on the economy, based on different rates of emissions reduction, it is likely that the case for adopting a more ambitious emissions reduction target would have been stronger.

But perhaps that is why this analysis is missing. The client didn’t want us to know.

The time-path to net zero emissions

And that leads on to the final concern about this modelling: it focuses almost entirely on the endpoint, 2050, and there is very little information about the time-path for getting there.

We know that if global warming is going to be limited to no more than 2 degrees Celsius and preferably to 1.5C then all the developed countries need to at least halve their carbon emissions by 2030.

In the lead-up to the Glasgow climate summit, fortunately all other developed countries have accordingly signed on to this commitment. Australia is the outstanding hold-out and is still refusing to revise its target for 2030, despite agreeing to a Summit communique which requested it to next year lodge a more ambitious emissions target for 2030.

However, the good news is that the modelling report does include information about future energy costs that can be used to assess the economic impact of a more ambitious emissions target for 2030.

As can be seen from the table below (derived from the modelling report) in each case most of the projected reduction in the costs of these alternative technologies is forecast to occur in the next decade. On the other hand, the projections of the different technologies used in electricity generation and road transport suggest that most of the adaptation to renewable energy occurs post 2030 and not before. 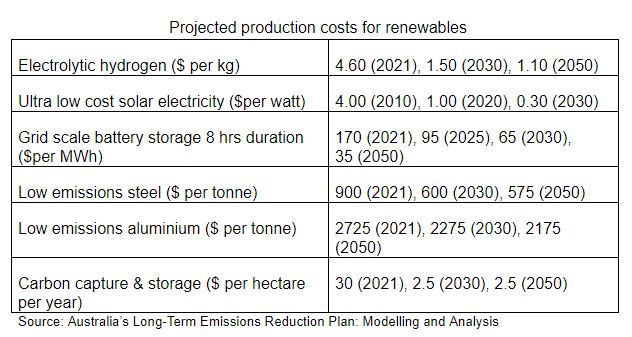 Part of the reason for the apparent slow rate of take-up of the new technologies that will reduce emissions may be that it reflects a view that present government policies will not get us there.

For example, despite its U-turn to embrace electric cars, present policies will not much accelerate their rate of take-up. Instead, as the Grattan Institute has pointed out, removal of present taxes to lower the initial cost of electric vehicles and tougher emission ceilings would be much more effective.

Nevertheless, now that we know that most of the reduction in the cost of the carbon reducing technologies is forecast to occur in the next decade, then it should be possible to design policies to support a much faster rate of take-up of the necessary carbon reducing technologies than the government is projecting. In addition, that also means that a much more ambitious target for carbon emissions reduction by 2030 is equally viable.

This is the most important unspoken lesson from the modelling, and it is to be hoped that Labor will respond accordingly when it announces its target in a few weeks.