Historians may define the seminal moment when a once great nation began its decline, as the moment when a grandiose narcissist, with a fondness for crude invective, ascended to the US Presidency.

For at least a century, America has been the world’s leading democracy – a shining beacon of hope for the dispossessed and repressed. An ascendant American superpower led the west through times of war, peace, prosperity and moments of great political tension. In four short years, however, America’s symbolic role as a global democratic exemplar, reassuring an anxious world that democracy was the most durable and secure system of government, may have been irrevocably tarnished.

Trump’s latest tweets about vote-rigging, though incendiary and redolent with his usual hyperbole, have arguably achieved two important things: They have exposed extraordinary dysfunction in the US electoral system and bolstered a universal passion for a more dignified political discourse. It is incomprehensible that a nation which pioneered space exploration…

These flaws are incongruous in a democracy which draws great moral authority from the lofty words of Jefferson and Lincoln in texts like the Declaration of Rights, the Declaration of Independence and the Gettysburg address – documents which share a place in the pantheon of great democratic scriptures, alongside Magna Carta and others. The heroic democratic principles they espouse stand queerly juxtaposed to the deeply flawed machinery upon which their implementation depends.

Beyond this electoral dysfunction, a more concerning legacy of the Trump years has been his disdain for global institutions and lack of moral leadership in a world dislocated by tectonic events; the Corona Pandemic, Britain’s withdrawal from the EU, the rapid rise of China and the appearance of worrying cracks in the rules-based world order.

Trump’s America has thus fallen from grace just when we needed it most – and so precipitously that it has caught us by surprise. As America licks the wounds of its deeply divided society in search of its own, lost identity, the free world is floundering in search of new, charismatic leadership to fill the void created by its political inertia.

As this American tragic-comedy unfolds, a more insidious drama has been playing out on the Sino-Russian frontier. Unobserved by a world hooked on the addictive reality television of the US election, Putin has quietly proposed a new axis – an alliance with China. His proposal was welcomed by Xi Jinping, who agreed to work swiftly towards it. Such a development will shift the balance of power in favour of two, malign, autocratic regimes whose combined military might now presents significant new risks for the free world. We cannot stand by passively as these enemies of freedom and democracy rush to fill the void created by America’s transitory paralysis. If we allow that to happen, our lives, and the freedom’s we all take for granted, will surely face their greatest test.

Closer to home, we must understand what these developments mean for Australia and be nimble in recalibrating our diplomacy. As old friends, we must stand by America as it seeks to rebuild its credibility and resume its place in an uncertain, rapidly evolving world. Australia can be a calm voice of reason, as the free world sits down to reconsider its future. As a respected, middle-ranking power, Australia should be a constructive voice of advocacy in that process, including …

Above all, in its dealings with the US, Australia must surely welcome a calmer and more dignified Biden administration whilst managing, with astute diplomacy, a more complex political landscape. A democratic President may occupy the White House, but his Republican opponents will likely continue to control the US Senate. New American policy settings which sit uncomfortably with our own, will thus require deftness, and even some reaching across the aisle.

Indeed, as a new year approaches, and with it the dawning of a new age, Australia will need to support its two greatest mates, Britain and America, as each struggles to regain its feet in a troubled world. 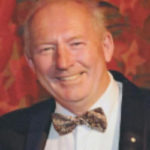