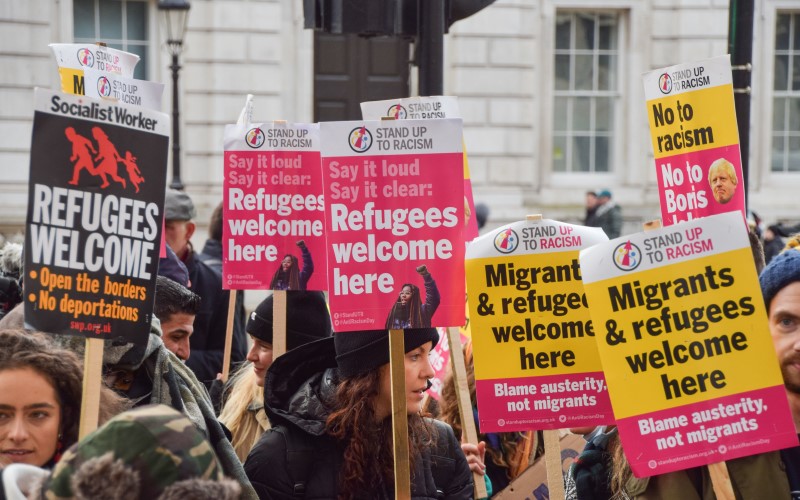 Economic sanctions on Middle Eastern countries targets civilians and turns them into refugees — and they head for Europe, not the US.

This UK government, more than any in British history, thinks in terms of slogans and headlines. The silliness and impracticality of its proposals to stop desperate people crossing the English Channel in overcrowded dinghies is the latest proof of this.

Prime Minister Boris Johnson and Home Secretary Priti Patel owe their political careers to exploiting xenophobia, so their failure to cope with a complex problem like the Channel crossings, requiring international cooperation, is not unexpected.

Even by the dismal standards of the past few years, Johnson’s and Patel’s flight from reality would be comical — if the outcome was not so tragic.

The proposals in Johnson’s public letter to President Emmanuel Macron include such fantasies as the patrolling of 125 miles of French beaches by British security companies alongside the gendarmes.

What country in the world would permit such a dilution of its sovereignty? This idea is on par with Patel’s much-derided suggestion that British vessels gently ram fragile craft crowded with people, and which deflate at the touch of a pinprick, in order to turn them back to France.

Governments lacking a practical policy frequently fall back on “declaring war” on some evil agency — in this case the people smugglers — who can be blamed for everything.

A good example of this is the “war on drugs”, declared by US president Richard Nixon half a century ago, with notoriously futile and self-destructive consequences.

The government’s latest magic formula is to destroy the “business model” of the people smugglers, who are portrayed at one and the same time as a gang of murderous gangsters, but can somehow be pressured as easily as if they owned pizza parlours by unenforceable threats of dire punishment.

As with heroin and cocaine, this policy is not going to work because the demand for what the criminals provide — drugs in one case, illegal location to another country in the other — is too strong and the rewards for the providers too great.

A bombastic law-and-order approach may impress the public but, one way or another, the supply will always be there. Many things affect the price of hard drugs in Britain, but much-publicised police action is not one them.

Despite wall-to-wall media coverage of the boat people in the Channel, there is still limited understanding of what made them sell their last possessions, pay gangsters a lot of money, and abandon their homes. Clearly, a main motive is that they see no future in their own country, but the reasons why the demand for the services of people smugglers is so high is more complicated.

The identity of the 27 people who drowned when their little boat sank on Wednesday is a pointer to what has gone wrong. Many came from the town of Ranya in the Kurdistan region in northern Iraq, according to other migrants.

The other victims whose bodies have been identified include a Kurdish man and woman, both from Syria, two male Yemenis, a Kurdish man from Iran and two other males from Iraq, though it is not known if they were Kurds or Arabs.

Iraqi, Syrian and Iranian Kurds predominate because the Kurds have been the biggest losers in the wars in the northern tier of the Middle East. Hailed as brave allies against Isis until it was finally defeated in 2019, the Kurds were abandoned to the mercy of their many enemies.

A UN report this week estimated that 377,000 Yemenis will have died in Yemen’s forgotten Saudi-orchestrated and Western-backed war by the end of 2021, some 150,000 in the fighting and the rest from hunger caused by the conflict.

Many of the current wave of migrants reaching the Channel come from four countries — Afghanistan, Iran, Iraq, Syria — that have seen ferocious military conflicts and still suffer from their consequences. It is correct to say that the West played a significant role in bringing war to these countries and cannot escape responsibility for the disasters that followed.

But denunciation of outside intervention misses the point that the nature of warfare in the Middle East has changed over the past 30 years and this has produced a different kind of mass flight. As a result, the debate in Britain about whether or not people seeking asylum are genuine refugees escaping violence and persecution or, alternatively, economic migrants looking for an improved standard of living, is usually discussed on false premises.

This attitude might have had some validity 30 years ago, but not today, because military and economic warfare have blended together. I first saw this in 1990, when the US and its allies propelled the UN into imposing tough sanctions, amounting to an economic siege, on Iraq after Saddam Hussein invaded Kuwait.

The embargo lasted 13 years, did nothing to displace Hussein, and entirely wrecked the Iraqi economy and society, which have never entirely recovered to this day.

The Kurds in northern Iraq, though mortal enemies of Hussein, were hit as badly as everybody else in Iraq. In the 1990s, I visited a village not so far from Ranya, reportedly the home of many of those who died in the Channel this week, where villagers could only make money by defusing a peculiarly dangerous jumping mine called the Valmara, which littered the area, and selling the explosives inside for a pittance. Many had lost their hands or feet in the minefields.

Iran has long been the target of economic warfare, which was tightened by Donald Trump during his presidency when he abandoned the nuclear deal with Iran agreed by Barack Obama. Sanctions entirely failed to force the Iranian leadership to negotiate, but they did impoverish ordinary Iranians and the Iranian Kurds in particular.

Syria has been subjected to sanctions since the first uprising against Bashar al-Assad 10 years ago. But last year these were strengthened by Trump in order to sever all commercial links with the country.

This was under the so-called Caesar Civilian Protection Act which did nothing to protect civilians, but led to the collapse of the Syrian currency and malnutrition, not only in the government areas, but in the opposition-held zone around Idlib, the Turkish-controlled enclaves and the Kurdish region in north east Syria.

Military and economic warfare now go together so it no longer makes sense to distinguish between economic migrants and political refugees fleeing military action. Both are refugees driven from their homes by different types of warfare. Yet there is little appreciation in the West that if you wreck the economy of a country, many of its inhabitants may end up on your doorstep or die trying to reach it.

Economic warfare in the Middle East works particularly well for Washington, because the millions it displaces head for Europe and not the US. The Europeans never seem to have taken this on board.

What can be done to stop or reverse this exodus? The link between economic sanctions and forced migration should be recognised for what it is. Embargoes should be seen as one of the cruellest weapons of war, one that targets civilians and turns them into refugees.

This article was first published by Counterpunch and is reproduced with permission.