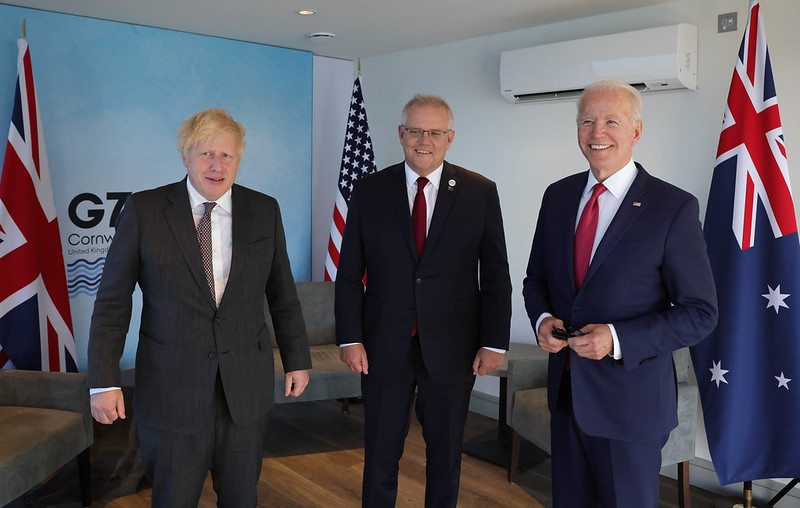 Leader of the trilateral security pact of Australia, the United Kingdom and the United States. Image: Flickr/Andrew Parsons

News stories from the leaders of Aukus are just too much these days. They would have been amusing if the issues at hand weren’t so serious, even tragic.

Leading the trilateral security pact of Australia, the United Kingdom and the United States must be so heady they seem to be mesmerised by their own rhetoric. Someone give them a reality check, please.

In another one of his frequent anti-China jabs, Australian Prime Minister Scott Morrison said Australia would move in lockstep with its allies to sanction China if it provided military support to Russia in its war against Ukraine.

“And potentially what, if any, support has been discussed for military support for Russia? Because that would be an abomination,” Morrison said.

That’s the allegation that the tough men of Aukus have been telling each other and the world these days. Others who are in the know, such as lower-level officials in the US and their European colleagues, are more circumspect.

Wally Adeyemo, a US deputy treasury secretary, said this week: “China can’t give Russia what it doesn’t have. And what Russia needs most is it’s going to need things like semiconductors going forward, semiconductors that China doesn’t have and it can’t provide them.

“Chinese financial institutions and the Chinese state have been very cautious about violating not only American sanctions but the sanctions put in place by other countries. We haven’t seen any evidence that China’s done anything to violate our sanctions.”

Guess Adeyemo is not getting a promotion any time soon.

European Union spokeswoman Nabila Massrali said Brussels had received “no evidence” that Russia had asked China for military support. “We cannot confirm or deny any allegations that Russia asked for assistance from China,” Massrali said.

On the other hand, it’s a matter of public record that Australia is planning to become nuclear-armed – against China, of course – under Aukus. Is that not “an abomination”? Perhaps China and other Asian countries have more reasons to impose sanctions on Australia for its upcoming nuclear posture that will, in time, threaten the whole region?

British Prime Minister Boris Johnson is visiting Saudi Arabia and the United Arab Emirates (UAE) to lobby for more Arab oil to calm markets roiled by the Ukraine crisis. He arrived days after the Saudis executed 81 people in a single day, the largest number in many years. But as British health secretary Sajid Javid helpfully explained: “Whether we like it or not, it’s one of the world’s largest oil producers”. And this from a health minister!

The military intervention of Saudi Arabia and the UAE, backed by US weapons and intelligence, in the seven-year-old Yemen civil war has caused the worst humanitarian crisis this century. The United Nations humanitarian chief Martin Griffiths warned this week that 19 million Yemenis are facing hunger this year and up to 160,000 could die from famine. If only Yemenis had blond hair and blue eyes, they may have had more sympathy and help from “the international community” and attention from “the international news media”.

US President Joe Biden has called Vladimir Putin “a war criminal”. I think the Russian president qualifies as one, but he isn’t the only one. I will let readers pick their own favourite candidates for war criminals. Some of them may well live closer to Mr Biden’s neighbourhoods or those of his allies.

As Indian essayist Pankaj Mishra wrote in Bloomberg, “Today’s geopolitical realities are even messier than they were during the Cold War, blurring any neat moral opposition between democracy and autocracy. Turning to Venezuela and possibly even Iran to alleviate pressure on oil prices, the United States is already hollowing out its ‘alliance of democracies’.” Quite!

Washington has spent years denouncing and sanctioning the autocratic states of Venezuela and Iran, and now this volte-face? This is really getting a bit too much.

This article from the SCMP of 17 March is posted with permission.