When a news network based in India or a newspaper based in Nigeria or Hong Kong can be held in the same high regard as The New York Times or the Financial Times, we will know that we have succeeded in eradicating global white privilege in the media.

In the Western liberal tradition, the media is deemed to have a critical role in speaking truth to power, exposing injustices and scandals, and even seeking notoriety to attract eyeballs.

The journalist is viewed as beyond reproach as a member of the “free press.” This is not in fact the basis for how media works in practice, with economic and business considerations driving many of the decisions of the mainstream media, especially in more commercial fields such as television. This so-called liberal tradition has in fact been usurped by economic interests and more lately by the insecurity in the West leading to the media taking highly patriotic positions and even colluding with their governments to protect Western interests. The most obvious is the onslaught on all things Chinese, which perversely is beginning to backfire as the rest of the world awakens to the ugly display of race-based prejudice.

The impact of Western media became increasingly visible throughout 2020 and early 2021, as mainstream media outlets have attracted blame for how they have covered tensions between the United States and China. Mainstream Western media cannot run away from the view many non-Whites hold that the media has fueled racism against Chinese citizens. Western media outlets will have to come to terms with the realisation and the growing awareness in the non-Western world that their coordinated attack on China is rooted in racism and White superiority to preserve global White privilege.

Understanding the Western media is thus core to our understanding of global White privilege. It is where the status symbols of global Whiteness are spread around the world, and a sphere where the West is seen as the paragon of a Western-defined set of values. Scores of Western journalists have made global reputations reporting on Asia, Africa, the Middle East, and other regions as if they were residents, and customizing stories for “folks back home”. In that process, they carry that ultimate free pass – that of the “independent” White Western journalist, the servant of the almighty free and fair Western press and therefore the guardian of the truth.

In discussing the global media, we need to be aware we are talking about a very small number of companies and organisations: media consolidation and the decimation of smaller and local media outlets mean that more and more of the press is dominated by a few giant outlets.

A more representative media that sheds the shackles of global White privilege is long overdue and will help both Westerners and non-Westerners. Westerners will be able to truly understand what is happening around the world, with a clear view of how those outside the West think, act, and make decisions. And non-Westerners will have a clearer idea of what is happening in the West, with stories and analysis tailored to their needs rather than to the needs of a purely Western audience.

The core issue regarding global White media is that it isn’t global at all but in fact highly parochial. All the outlets we consider to be “global” – whether news agencies, newspapers, or news networks – are all based in the West and run by White people with narrow world views, to represent and defend the interests of the West.

First, these global outlets operate primarily in English – the world’s lingua franca due primarily to British and then US dominance of the international media space throughout the 20th century given their historical advantages. The dominance of English crowds out insights that may never be published in English: no one spends the time to research, translate, and disseminate stories that may never escape a country’s borders.

This is how the dominance of Western outlets in the global media space constrains the way we think about global issues and reinforces the existing structure of privilege we see in international culture today. It reinforces the idea that Western publications are superior and that the White view of a given situation is the one that lies closest to “the truth”. that its ideas and positions on issues are the right ones, that its sense of style is the very essence of modernity, and that its values are the ones that matter. It muzzles the very diversity it claims to seek and represent. This spectrum of influence ranges from ideological positions on geopolitics – for example, treating China as a threat – to economic solutions, climate change, the best books, and what is fashionable.

In addition, Western media are not accountable to non-Western societies in the way they are to Western societies. Members of British society, including minorities in Britain, have avenues to seek redress if something is misreported or misrepresented. An Asian business or government has no way to correct harm done by poorly analysed commentaries and viewpoints that are prejudicial to their interests. Any attempt to do so is seen as an attack on the free press and becomes an international scandal.

The Western journalist is transformed into a freedom fighter for the cause of the oppressed and in turn seeks notoriety, which further burnishes their credentials. We are seeing that in full display in Kabul right now.

Western governments and Western publications may have an antagonistic relationship at home, but overseas, they work together. Western governments clearly see the operation of foreign correspondents as working in their national interest, and so push for increased access, more open immigration rules, and lack of government interference in non-Western countries. A classic example of this was when the liberal US media, which missed no chance to criticise Donald Trump, went into hyperdrive for a few days as they applauded his decision to drop bombs on Syria and the mother of all bombs in Afghanistan. When it comes to war and displaying US military might across the world even when it is destructive and illegal, the media – both right and left – gets in line, as doing so is simply being patriotic and all values go out of the window. After all, “foreign lives don’t matter”. As an example, the Western media gave so much coverage to the unfortunate deaths of 12 US soldiers killed at the airport, yet hardly said anything about the 200 or more Afghans who were similarly killed.

White privilege also emboldens Western journalists to believe they have a right to an immediate visa to any country where they want to cover a story and embarrass a government. Any hesitation or refusal by a country to issue one without delay and embracing arms elicits a concerted attack by all Western media about cover-ups, human rights violations, and dirty tricks. But you would not even know if an Indian, Chinese, or African journalist was not allowed into the US, UK, or Germany – it is simply not news.

The global publishing market, which has its own significant problems with global White privilege also deserves a mention.

Every airport bookstore – perhaps the closest thing we have that reflects the book consumption tastes of the “international” audience – features the same books, primarily from Western authors. Non-Western topics, if they are covered at all, are usually written by non-Western authors.

Anyone looking for a non-Western perspective would likely be unfulfilled by what they find. The same could be said for someone poring through the standard best-seller list or the most prominent book reviews.

The reason is structural: the channels for getting published – going to the right creative writing programs, having the right agent, getting the right meeting with a publisher – are all easier to navigate for Westerners, and specifically White Westerners, than for anyone else.

Coverage of books is also oriented toward Western and White authors.

Thinking of ways to resolve these structural problems is admittedly hard. Concentration of power and influence is an unhappy by-product of an industry where an increasing number of consumers are interested in or are being channeled toward fewer and fewer sources of information. This sadly reflects a world where the wealth of non-Western knowledge and perspectives goes unrecognised and unpublished.

There are primarily two paths that can be followed in dismantling global White privilege in the media sphere.

The first is to encourage Western media outlets to become truly global in their operations. But this is highly unlikely given the deep rooted sense of racial superiority that is deep-rooted even in the so-called liberal media and the increasing divide between the West and the rest which has now put the Western media on a defensive footing.

The second is to encourage the growth of entirely non-Western media outlets, which would report on global news from a non-Western perspective. This will lead to a more vibrant debate on global issues and broader and deeper reporting of non-Western topics and perspectives. Asia must give birth to its own group of international media groups and publishers. It is time Asian investors started to look into this market seriously or continue to accept the bias that has now become so prevalent in Western media and endure the costs of such media manipulations.

A couple of large English-language media groups and publishers in Asia would also be able to challenge the reporting biases of Western media and retailers unwilling to showcase Asian writers.

More prominent Asian voices in media and publishing could only be a good thing. The region needs role models as its people develop new businesses, public policies and systems of government. It needs insights based on local research by its own writers, academics, business leaders, researchers and historians. Imagine how illuminating a “rewriting” of the region’s history as seen through the eyes of Asians could be?

An international-standard publisher based out of Asia would need to do three things.

First, it must market and sell directly to Asian populations. Second, it would need to search for new and insightful Asian works, in English and other languages, and present them to a global audience.

Finally, it would need to act as the middleman between Asian authors and Asian readers. Asian authors would no longer need to define success as “making it big” in the West (which inevitably leads to a form of literature which panders to Western tastes), as they could succeed with Asian customers.

The end result of either of these two paths is to build a non-Western media sphere that is treated seriously by the global elite. When a news network based in India or a newspaper based in Nigeria or Hong Kong can be held in the same high regard as The New York Times or the Financial Times, we will know that we have succeeded in eradicating global White privilege in the media. 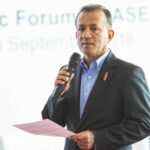