There can be no freedom or equality without Justice

Out of the blue, my fellow Olive Kids board member, Amin Abbas and I received an invitation from Ron Finkel and footy great, Gareth Andrews, to discuss Project Rozana, an overseas aid initiative for children aimed at building bridges to peace between Israel and Palestine.  What would usually be a wonderful opportunity to work with others to help Palestinian children in need, at the same time, raised for us some red flags.

As a kid growing up in suburban Melbourne, VFL footy was what it was all about. Whether it was playing kick to kick, screaming out your favourite player’s name as you tried to take a specky by jumping on your mate’s back, kicking a goal or collecting and swapping footy cards.    So, the chance to meet and even work with a star from my childhood was not something I would want to pass up.  However, life sometimes presents us with difficult choices.

As Palestinians who have been ethnically cleansed from our ancient homelands, we have an aversion to activities that “normalise” our ongoing dispossession.   Amin and I are only too aware of how Israel uses normalisation as a fig-leaf to continue benefiting from a “business-as-usual” environment, while the Israeli government continues to oppress the Palestinians in their matrix of control.  Wary as we were, we thought we should at least hear them out.

Amin and I soon realised after Ron’s opening 15-minute monologue, that we should not have agreed to meet.  Ron’s denial of Palestinian agency, rights and connection to land were subtle enough, but oppressed peoples the world over recognise the language of privilege, the

language of the oppressor and the language of the settler colonialist. The political, Israel-centred framing of the “partnership” suggested, would expect us to adopt an Israeli vision of a peaceful resolution. Simply the aid offered by Project Rozana only entrenches our need for it.  It has nothing to do with obtaining justice for the Palestinians.

While Project Rozana claims to empower Palestinians, it simultaneously adopts positions that disempower them.   This creates an illusion of normalisation between Israelis and Palestinians that does not, in fact, exist.  A humanitarian project which is silent on the subject of more than 54 years of occupation, is complicit in the very harm that it says it seeks to address.

It is unfortunate that Ron believes the capacity of diaspora Jewry to alter this situation is zero.  Initiatives that do not aim to end Palestinian oppression, regardless of the intentions behind them, only serve to privilege oppressive co-existence. Therefore, Olive Kids and Palestinians cannot stand beside Ron or promote his work.  We do not want to accept the sympathy or the charity of Israelis, Americans, Britons or diaspora Jews; we seek liberty and self-determination for Palestinians and will work with anyone who shares this aim.

Project Rozana has attracted high-profile and government support in Australia, but sadly, nothing in Palestine/Israel is apolitical.   Gareth’s desire to work hand in hand with us is

commendable and we would love to have him join us and help us in our work, but it must be done in a way that does not legitimise the matrix of control that Israel uses to maintain Palestinian oppression.  The historic record and the establishment of a settler-colonial regime in Palestine following the expulsion of most of the indigenous people of the land cannot be glossed over.  When a people have been continuously denied their land and inalienable rights, the only thing we have left is our dignity.  We will not bow to the occupier.

The path to restorative justice is simple. Palestinian Christians and Muslims believe that they have an equal right to the land and that Jews share that same right.  However, Zionists must reject any superior claim to that land and their belief in an exclusivist Jewish nation over the multiple cultures and religions in that land.  Only then can decolonisation begin, and only then can we and our children and children’s children enjoy a coffee together in peace in a liberated Jerusalem.

As a VFL footballer in the 60’s and 70’s, Gareth played with the immortal Graham “Polly” Farmer, an indigenous footballer and survivor of the stolen generation. He was a man of such prodigious talent that he changed the way the game was played and was inducted as one of 12 Legends in AFL’s Hall of Fame. Gareth explained to me that he didn’t understand the

suffering Polly endured as an Aboriginal and while he didn’t take part in any racist taunts, he didn’t stop them either. To his credit, Gareth is on a journey with his organisation Life Again to try to better understand the relationship and challenges of the colonised and the coloniser.

In 1976, I worked long and hard to finally complete my set of Richmond footy cards: a friend needed my spare Bruce Doull and I finally got my Gareth Andrews. Little did I know that the story would not end there.  I hope that Ron doesn’t take that long to “get” Palestinian concerns. 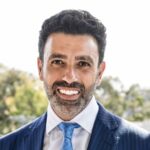 Nasser Mashni is the son of a Palestinian refugee. He is a co-founder of Australians For Palestine, a founding board member of Olive Kids and the current Vice President of the Australia Palestine Advocacy Network.