Every jurisdiction in Australia, except the Commonwealth, is committed to achieving net zero emissions by 2050

Over the past several years, the states and territories have been driving policy on climate change in Australia. A concrete example is the commitment from every jurisdiction in Australia, except the Commonwealth, to achieving net zero emissions by 2050. This progress by the states and territories was recently acknowledged by the president of the next UN climate summit.

‘Climate change is the defining issue of our time – and we are at a defining moment’ (Antonio Guterres, Secretary-General, United Nations, 2018). The Climate Health WA Inquiry is Australia’s first in-depth statutory inquiry into the health impacts of climate change. It recognises WA’s vulnerability to climate change and provides ten recommendations for the health sector to respond to the challenges.

With respect to the specific health impacts of climate change, Queensland led the way with their 2018 Human Health and Wellbeing Climate Change Adaptation Plan for Queensland. In 2019, Victoria produced a Pilot health and human services climate change adaptation action plan 2019-2021. This year, the Northern Territory’s Climate Change Response: Towards 2050 mentions health impacts specifically, and in Tasmania the Department of Premier and Cabinet released the report of a Climate Change and Health Roundtable.

The latest action comes from Western Australia, with the recent release of the findings from the Climate Health WA Inquiry. This was Australia’s first in-depth statutory inquiry into the health impacts of climate change, and sought out local, Australian and international experts to obtain the best science, data and evidence to inform recommendations.

The final report localises the climate change challenge to Western Australia with regionally-specific examples of current impacts. Importantly, the report notes that the Inquiry was not presented with evidence of any beneficial environmental or health impacts from climate change in WA. To the question of whether there are detrimental impacts which require policy action, the answer was a resounding and unanimous ‘yes’. The report unequivocally states that “To date, societal action has not proved timely or sufficient, either globally or in Australia, to counter the evident public health threat from climate change”.

Western Australia is vulnerable to climate change, with a steady decline in rainfall in the south-west, drying interior, lengthening fire season, exposure to cyclones and extreme weather events, and a rate of sea-level rise almost three times the global average. The report makes several suggestions to improve the climate-resilience of cities and large towns in WA, including improving early warning and response systems for both air pollution and heat waves. It notes that adaptation will have to keep up with the pace of change such as increased risk of mosquito-borne diseases and increased severity of extreme weather events.

The Inquiry found that the health sector will need to change at least as fast as all other sectors in responding to climate change, and challenges health professional groups to not just call for government action, but also show what they are prepared to do themselves. The WA Government has accepted in principle the recommendation to establish a Sustainable Development Unit in WA, which would be Australia’s first.

Governance structures will be required which bridge mitigation and adaptation, keeping the clinical and public health arms of climate response working together and supporting each other. The breadth of partnerships needed across health and between health and other sectors will need to be reflected in that governance.

Better explanation of the links between climate change and health are required, giving people practical guidance on effective individual and community actions for mitigation and adaptation. The long history and current practice of Aboriginal stewardship of Western Australian lands and waters should provide a guide to our medium and long-term future.

The Inquiry delivered 10 key recommendations to the WA Government:

While the Commonwealth Government has not yet adopted the Climate and Health Alliance’s Framework for a National Strategy on Climate, Health and Wellbeing for Australia, there is now a window of opportunity for a national effort to build on and augment state and territory efforts and commitments to ensure that Australia’s health system is prepared for the effects of climate change on people’s health and on the system itself.

Health and public health groups must respond to this challenge, lead by example wherever possible, and form partnerships for action with others. The next decade has to be different to the last. This year has shown us all new ways of working, studying and living, many of which just happened to be more environmentally friendly. If there are some positives to be taken from the experiences in 2020, surely the demonstration of our joint capacity for change is a notable one. The next challenge will be to maintain that learning, at the individual, community and government levels, and move decisively towards a more climate friendly future.

This article was originally published on Public Health Association of Australia 4 December 2020. 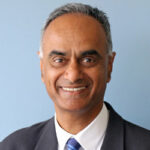 Tarun Weeramanthri is the President of the Public Health Association of Australia, and an adjunct professor in the School of Population and Global Health at the University of Western Australia. He is a specialist in internal medicine and public health, and has a PhD in social medicine. Tarun was Chief Health Officer in Western Australia (WA) from 2008 to 2018, and in the Northern Territory (NT) from 2004 to 2007. He recently completed an Inquiry into the Impacts of Climate Change on Health in WA, on behalf of the WA Government.