There is no hope in a Voice to Parliament 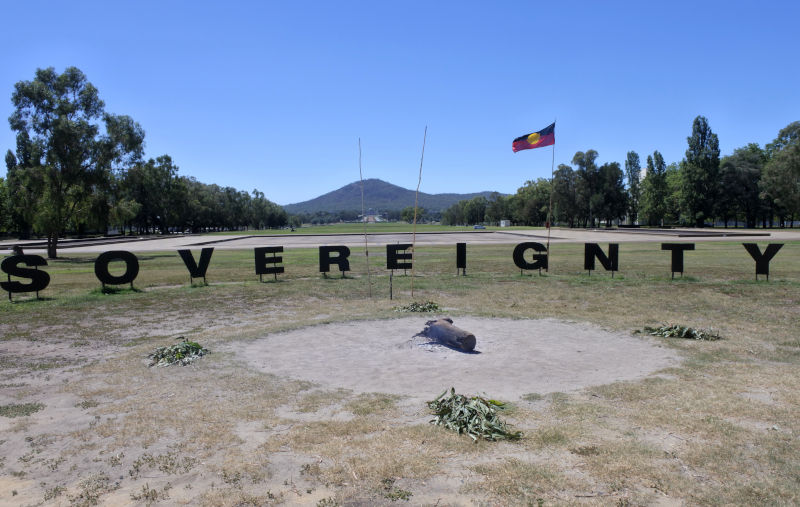 The Voice to the Australian Parliament provides no hope and no future for First Nations imprisoned by ongoing colonialism. It will not work towards de-colonisation in Australia. In practice it will support colonial decision making which affects Aboriginal lives in the distant metropolis of Canberra.

The world needs to listen to the voices of First Nations across the continent we now call Australia and act fast if we are to have hope.

There is no hope for the freedom of Aboriginal Peoples and our natural worlds in a state where our future continues to be imprisoned by an ongoing colonialism. Constitutional recognition, by-way of a Voice to the Australian Parliament, provides no hope and no future for First Nations.

We are told the ‘Voice’ to Parliament will be heard. I have no confidence that the voice of every Aboriginal person across our unceded territories will be, for it is the collective sovereignty of our voices that needs to be heeded.

We are told this is an opportunity for First Nations to be heard and to explain ‘what do we want’. The colonial state of Australia knows what we want. They have heard it all before. The many who have spoken and not been heard, want back our power to self-determine as we have always determined our lives in connection to the natural world from the beginning of time, we want to be in a strong sustainable relationship with our natural world. We want Aboriginal deaths, poverty and homelessness to stop. What we want and need to survive colonialism and genocide has been clearly stated in similar terms across the 100s of First Nations who have co-existed in these lands now called Australia for millennia.

Colonialism is the relationship of domination between First Nations and the original invaders of our territories, today the Australian government continues to administer and implement the ongoing legacies of colonialism. The fundamental decisions affecting the lives of colonised Peoples are made and implemented by the colonial rulers in the pursuit of interests that are often defined in a distant metropolis away from First Nations capacity to be self-determining.

The proposed Voice to Parliament will not work towards de-colonisation in Australia. In practice it will support colonial decision making which affects Aboriginal lives in the distant metropolis of Canberra. Aboriginal sovereign voices already exist and are well equipped to discuss how we de-colonise and act now in resisting the ongoing colonisation and genocide of First Nations and our territories. We need to repudiate colonialism, the root cause of our dispossession and the illegal occupation of our lands. The Australian federal and state governments have made no attempt to reform their colonial identities. There has been much rhetoric and promise on the half of the Australian governments about ‘recognition’ by way of constitutional change. While a much-touted ‘recognition’ campaign and ‘talk’ of a treaty, and a referendum on a Voice to Parliament, all continue as relatively ineffectual noise.

Australian laws do not provide for ‘Indigenous rights’ or ‘human rights’ protection, instead, the Australian Constitution continues to embed powers which enable the commonwealth to legislate racist laws, as was acknowledged in the High Court decision of Kartinyeri, where the court decided the power to legislate is not limited by human rights considerations.

Calls for constitutional change, or the Voice to Parliament, do not give me hope or confidence as to how the proposed constitutional changes will ameliorate ongoing colonial legacies. The idea of a Voice to Parliament in the form of an Aboriginal advisory body is now being mooted but is criticised for being inconsistent with a position of Aboriginal sovereignty. It will remain a tool of the Australian governments, the colonists and will not advance Aboriginal sovereignty. The benefit of an advisory body has been questioned for its lack of an Aboriginal sovereign authority and power to turn the colonial project and its legacies around. While the proposed referendum to deliver an advisory body is being considered, there are questions: why embark on a Referendum proposal to enact an advisory body, when Parliament already has the power to legislate and could do so? Some would say that therefore it would embed the body permanently within the parliament, but others have argued this provides no guarantee that any future government will resource and support the voice and could simply ignore it.

What it is becoming clearer is that the Voice proposed cannot enable or deliver the return of land, Aboriginal self-determination, or reparation for the legacies of colonialism. The promise of an advisory body is that it would advise government about what it is Aboriginal People want, but what Aboriginal Peoples want has been clearly articulated and discussed for many years. Demands for justice from sovereign First Nations Peoples have more authority than any government sponsored advisory body.

If the Voice, is it, we cannot vest any hope in it. Hope lives in our Aboriginality, our ways of being, our un-ceded sovereignty and our dreamed futures. First Nations have already stated what we want, we need action, and the timing is critical.

Irene Watson belongs to the Tanganekald, Portuwutj, Meintangk and Bunganditj Peoples and works at the University of South Australia as the Prov Vice Chancellor of Aboriginal Leadership and Strategy, and Professor of Law, and has published extensively on colonialism and Indigenous Peoples.