Three things I learned as a white Australian academic in China

The term ‘nuance’ is often used to capture the multiple grey areas in our quest to understand China. The experience of teaching in a Chinese university led me to find a way to pinpoint and locate some of these nuanced spaces through an honest recognition of my own cultural and historical baggage.

After spending ten years living and researching in mainland China including three years working as Assistant Professor at a Chinese university, I returned home to Australia. Back in Australia, and working within international higher education, I read daily about Chinese international students and their academic and social difficulties within our universities. I read about how academics of Chinese background are questioned about their ‘loyalties’ and Chinese students are seen as potential ‘threats’ to Australia’s freedom of speech and expression.

Seldom have I come across accounts of the experience and lives of Chinese students in their home countries and what this means when they study abroad. Even more rare are discussions about non-Chinese academics in China and how their racialized identities become a part of their experiences within classrooms and communities in China.

These are three key things that I learned as a white Australian sociologist in a Chinese university that could provide input into understanding the complex relationship between race, governmentality and the experience of teaching and learning. These three points are based on my own personal observations and experiences, and I hope will provide a contribution to discussions about how best to work with China and Chinese students in Western universities.

It’s time to talk about Whiteness

Like universities around the world, there are pressures on Chinese institutions to ‘internationalise’. When I arrived, knocking on the door as a relatively fresh PhD graduate looking for work, I became a part of my department’s internationalization strategy. I was to offer undergraduate and postgraduate sociology classes in English and in a ‘Western’ style.

From day one I represented learning and teaching ‘outside’ China. Very soon, this led to a visceral awareness of myself as embodying ‘Western’ ways of thinking and being. I represented non-China and I was teaching possibly one of the most Western academic disciplines—sociology.

While it was assumed that I would be disseminating non-Chinese knowledge and non-traditional ways of teaching, I was never asked to justify myself. Unlike academics with Chinese heritage in Australia, I was never once asked how I manage to ‘overcome my bias‘. I wasn’t asked to prove my objectivity. It was assumed that I carried with my white body a history of thought. This went unquestioned.

Nevertheless, there was a gauging of ‘friendliness’ and ‘openness’ to China and to understanding different ways of thinking and being. I was—at all times—aware that should I have said something particularly unsuitable to the CCP that there were students in the class whose role it was to report this. I knew that student cadres were present without knowing who they were. My colleagues told me quietly that it was always possible that the microphones in lecture halls were used for surveillance. I had not come to China to talk about the three Ts: Tiananmen, Taiwan or Tibet. I had come, however, to teach a subject that has at its core, a critique of inequality and unpacking of power and social dynamics.

I needed to learn to decolonize my teaching, to strategically self-censor and to find means to direct a student’s thought process using very different examples and techniques than I would have used at home. This meant I needed to genuinely be open to learning-through-teaching, at once a humbling and self-indulgent approach. I needed to be both aware of the ideological baggage my white body represented and to find a way to build a productive classroom conversation around this difference.

Students in China are used to surveillance. It’s part of life in university campuses. However, this does not mean there are not ways to teach and to guide, albeit in a way with heightened self-awareness.

It’s time to question what we mean by ‘critical thought’

The notion that Chinese students have difficulty with ‘critical thinking’ is rife throughout higher education discussions. We hear that Chinese students often have difficulty in Australian classrooms because they are not “able to think critically”. This then extends to other difficulties Chinese international students face such as being unfamiliar with discussion-based tutorials and writing well-evidenced and structured argument.

Indeed, Chinese students are not generally bought up in an educational environment that teaches questioning the status quo, seeking diverse answers and debating issues to understand different perspectives. It is generally understood that this relates to the history of education and pedagogical tropes varying widely between the ‘West’ and China. In the ‘West’ we said to be informed by a history of Socratic methods and place value in developing and nurturing inquiring minds that are ready and able to participate in a liberal democratic system. In China, the emphasis is on remembering and reciting vast amounts of data and information. Through this mechanism, it is hoped that the values of discipline, hard work and obedience are instilled on young people.

However, this is far too simple an explanation and of cross-cultural differences in education and dismisses the role of critical thought in many Chinese young people’s world views. I fast learned that the picture is more complex than this. Many Chinese students were used to the stereotypical rote remembering approach to learning, however, they were also very keen to inquire, to understand and to learn about alternative understandings of the social world.

Asking questions and engaging in dialogue was not necessarily via a sense of unbounded freedom to discuss and debate any topic at any time, but rather students were working within and between societal norms and expectations to think, question and know. In other words, perhaps we would be better served to view Chinese students as not lacking critical thought but having different approaches to critical thought.

The binary between the ‘critically thinking’ Western student and the rote-learning Chinese student is in danger of devaluing Chinese ways of thinking, learning and understanding the world. The students I taught were layered and complex. They thought about the bigger picture. They were existing within parallel layers of the community simultaneously. Students felt expectations, traditions and rules from the university, government bureaucracy and their parents, for example. Yet, at the same time, these students were deeply connected to more free groups of peers via social media and technology. They were savvy at flipping between knowing what they ‘should’ say at any particular moment and were adept at self-monitoring according to context. This does not mean that Chinese students are incapable of questioning, of inquiring and indeed debating each other and the status quo. It just means that there are different social boundaries around the particular ‘spaces’ where this can occur.

Most of the Chinese students I taught genuinely wanted to understand their place in the world. The ways they did this were perhaps different from most students in the West, but it was certainly not with any less depth or with any less sincerity.

For example, in teaching a postgraduate course on ethnographic research methods, I asked students to conduct small research projects as participant observers and field note-takers in different communities or groups they were members of. This kind of activity takes a different kind of meaning for a young person in a society governed by government surveillance and a recent history of being monitored and observed by others in the community.

For this activity, students were asked to watch and interpret sociologically what was going on around them in an everyday setting. We discussed how this kind of research could be done best and most ethically in China. Students then needed to relate their findings to larger theories about social life and behaviour. These theories, due to my own academic and cultural background and indeed the history of my academic discipline were by and large based on the Western experience.

To ask Chinese students, researching within different regulatory and cultural contexts, to then apply their findings to a Western experience fast became an obviously absurd colonialist exercise. Instead, I asked students to use what they observed within their own communities and own cities to critique Western theory. I taught them to be comfortable to say “that does not fit here and this is why”. I wasn’t asking them to critique their society—particularly to a white foreigner. Instead, I wanted to know what they could see and what it meant and, importantly, whether or not they could explain this with an existing sociological theory from the Western canon.

At the end of this particular course, I received fascinating accounts of life as a young Chinese student including what it was like to be a part of an underground gay Christian church, how students multitask daily with technology, about the rise of coffee culture in their city as evidence of the rise of a conspicuously consuming middle class. I was at once teacher and learner.

Chinese students do indeed have different classroom memories and experiences from most Australian students. The danger we run is if we over-simplify and concoct a binomial around critical thought and place the ownership of this concept as somehow ‘belonging to us‘ and ‘lacking in them‘. Instead, we should be seeking to understand different approaches to thinking and learning and where and how critical thought plays a role in contemporary China.

Self-censorship is not unique to China

Here, in our freedom-loving, free-speaking, liberal democracy I find myself more aware that I am self-censoring what I can and can’t say about China than any experience of surveillance I had while in that country. I am already pre-supposing, for example, that because I am penning an article demonstrating an empathetic perspective on Chinese students, that I will be popped into a certain ideological box. The current simplistic media narrative and the national security-led approach to Australia’s China engagement, particularly within the university sector, is preventing those of us with experience and insights from speaking. This Hawk-Panda narrative is an example of Australia restricting voices and actively preventing all but those with the thickest of skins from truly engaging in any meaningful dialogue about the ‘China dilemma’.

Engaging with China is fraught with grey areas and contradictions. There are rarely clear boxes that we can place ‘China’ into. The term ‘nuance’ is often used to capture all these multiple grey areas in our quest to understand China. The experience of teaching in a Chinese university led me to start to find a way to pinpoint and locate some of these nuanced spaces through an honest recognition of my own cultural and historical baggage. 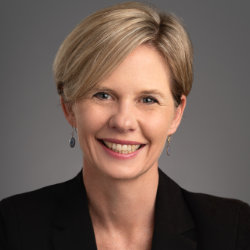 Angela Lehmann is Head of Research at The Lygon Group. Angela holds honorary positions at The College of Arts and Social Sciences, ANU and the Department of Sociology and Social Work, University of Xiamen, China.