The recent election result was a major disappointment for those interested in improving the health of the nation. The re-election of the Coalition promises an ongoing increase in support for private health insurance as the Government continues its long-term agenda of two tiering the health system.

Under the Coalition the public health sector is seen as a safety net and those with a well paid job or high income should use the private health sector. Labor’s health agenda remains unclear. Some of its policy may even have resulted in the same or even increased support for the private sector at the cost of the public sector. Its key service delivery proposal was for cancer and may have been good politics but
was grossly discriminatory poor policy.

Whilst there was disappointment amongst advocates for health reform, I think there are two important and somewhat reassuring aspects to the result which bear scrutiny. Firstly, as with most elections, the swings were generally not massive, nationally a 1.5% swing from Labor to Coalition. Secondly, the swings in wealthy electorates were not away from the redistributive agenda of Labor. This would suggest that such voters were considering a much bigger agenda than their own short-term interests. Whether the bigger agenda included climate change policy or a more equitable health and education agenda or other factors is unclear but probably quite varied.

At the other extreme however were those in lower socio-economic electorates. Labor lost them. It is hardly surprising that people who struggle with a weekly budget, who don’t even dream of Private Health Insurance (PHI), who worry about jobs, who live in fear that they too will be trying to live on a Newstart allowance 40% below the poverty line, would be more interested in how a government would impact their daily lives now, rather than five years or a generation down the track.

The health of a society and its individuals depends on two factors. Firstly, affordable timely access to high quality health care. Secondly, addressing all of the factors outside of health which impact on health. These are the social determinants of health. Central to health and wellbeing in a society is relative income inequality as much research and this graph show (see slide Health and social problems worse in more unequal countries) . 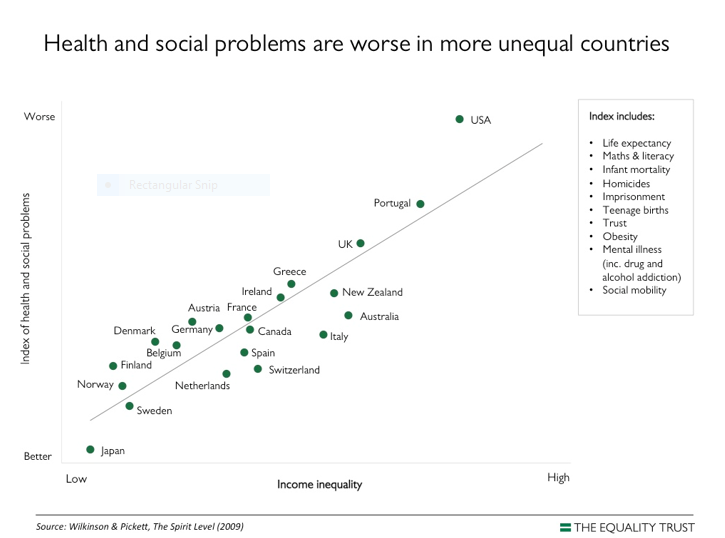 Central to Labor’s policy was reform of various tax exemptions which one would expect to lead to decreased inequality. Whilst health reformers would appreciate that decreased income inequality could of itself lead to improved health outcomes, such a claim would not be understood by many voters. Labor’s claim however, was that its tax changes would mean more money for increased services particularly in health and education. It proposed a significant boost to public hospital funding and to dental care for aged pensioners, both of which voters could have appreciated. Opposed to these however were the many other issues of concern to voters especially in the setting of a well constructed fear campaign.

Labor’s signature health policy proposal was a huge injection of funds to improve access to health care for patients with cancer. Its intended market was the one in two Australians who have cancer or have a relative with cancer. It either wasn’t interested in or failed to realise that patients who don’t have private health insurance use the public system where there are generally no costs for consultations, investigations, or treatment. If the cancer is life-threatening there will be minimal delays for treatment unlike so many other conditions treated so well in the public system. For political purposes it chose to discriminate in favour of those with cancer but against all those patients with serious life changing diseases which are not cancer and who don’t receive timely access to public care. The policy may have contributed to the positive swing in wealthy electorates. It probably didn’t register in working class electorates.

Labor’s proposed Productivity Commission inquiry into Private Health Insurance (PHI) may have been of interest to those who can afford PHI but would have held
little interest to the majority of voters in working class electorates most of
whom probably can’t afford PHI. The suggested terms of reference (TOR) of the
proposed inquiry indicated the central interest was to improve the value of the
product. The TOR did not explore the gross inefficiencies and inequities
inherent in taxpayer support for the 45% of Australians with PHI at the expense
of those dependant on the under-resourced public system.

Labor also proposed a permanent Health Reform Commission. On the surface this might suggest it had a vision for genuine reform. But like the previous Health and Hospitals Reform Commission under the Rudd Government, the terms of reference and construction of the committee meant it would be a powerless possibly politically compromised purely advisory body with no capacity to deal with the huge challenges of the inequities and inefficiencies of our unbelievably
complicated so called health ‘system’. It was never a vote winner.

Health care reform is challenging, especially from a Labor party with such a diversity of views. The Coalition has managed to reform the health system over the 25 years since the election of the Howard Government. They have tried to make big changes and failed. Instead they have gradually decreased their share of funding of public hospitals with the specific long-term goal of changing people’s perception of the public system from a service for all to that of a safety net, thus increasing people’s reliance on the private system. Labor lacks a clear vision, unable to decide how to balance the private/public division of health care. It has resisted the big changes the Coalition wanted (co-payments for doctors’ visits) and objected to the under-resourcing of public hospitals and dental care. But it has never clearly announced policies which would ensure that we move to an integrated health system with universal access, an emphasis on primary health care, and a recognition of the social determinants of health.

We do have high quality health care in Australia. It is not available to all. It could be so much better if issues of equity, efficiency, and prevention were properly addressed. That requires vision, belief, and political skill. The combination is not seen in the major parties. We must continue to push for such vision but, in the absence of such vision, those interested in reform must continue to advocate for incremental change for equity whilst resisting the ongoing divisive policies of the Coalition.

Dr Tim Woodruff is president of theDoctors Reform Society, an organisation of doctors and medical students promoting measures to improve health for all, in a socially just and equitable way. On twitter@drsreform

Tim Woodruff is a specialist working in private practice. He is a past president of the Doctors Reform Society and current Chair of the Australian Health Care Reform Alliance. Views expressed are personal.