And one of them, named Caiaphas, being the high priest that same year, said unto them, Ye know nothing at all, Nor consider that it is expedient for us, that one man should die for the people, and that the whole nation perish not. (John, 11:49-50 KJV).

Covid-era debates over the intrinsic value of human life have trundled the Trolley Problem (broadly, one person killed to save five), into the public arena. The general concept is not new.

The sinister Caiaphas quoted with conscious irony in John’s Gospel, is a millennia-old utilitarian: perhaps the most extreme, given the victim he had in mind. The ancient Aztecs were famously industrial-scale utilitarians: to keep the sun going and preserve humankind, they propitiated Huitzilopochtli with many thousands of human sacrifices.

Early in the Covid crisis, we saw the emergence of “Neo-Aztecs”, apparently prepared to accept Covid deaths in propitiation of their Economy God.

Utilitarianism was invigorated last year by the macabre, barely believable, footage from Italy. Overwhelmed hospitals, lines of trucks hauling away cadavers; all of which was happening in a first-world country. “Who Gets the Last Ventilator?” became a topical question, and some utilitarians were ready with an immediate response: “triage”.

“Bold” triage suggestions by a group of Italian medicos were discussed in a prominently featured article, ‘Ethical decisions about who lives and who dies may not be hypothetical’ (SMH, 20/03/20), including age limits on ICU admissions, and whether “patients who are elderly, frail, or have other health problems in addition to the virus” might occupy ICU beds too long while recovering, warranting summary expulsion.

In Australia, “Triage Protocols” pushed the envelope well beyond the traditional medical practice of sorting patients into levels of need and prioritising treatment accordingly (eg, the Canadian Triage and Acuity Scale).

Covid-oriented protocols turn normal procedures on their head: the more urgently at risk a patient is assessed to be – for example by reason of age or “co-morbidities” – the more likely he/she is to be denied treatment.

Fortunately, in Australia, the Federation worked a treat, and all levels of government responded to the popular will, obviating the Last Ventilator. So far, very good indeed.

However, hard-liners have issued no apologies, nor changed their tune. In the event of a viral recrudescence, they will inevitably resume the attack, perhaps encouraged by community Lock-down fatigue. And this is not the last pandemic: other battles doubtless lie ahead.

Accordingly, it is worth reviewing the tactics of Covid “appeasers” as we have come to know them, the better to counter them. Some notions are probably now defunct, like Herd Immunity and ‘Let’er Rip’. The “cure is worse than the disease” trope was trounced by the iron law that the lower a nation’s Covid death toll, the better is its economic performance.

Right-wing commentators, perhaps unconsciously echoing Nietzsche, have from the outset vehemently criticised measures to protect the lives of the vulnerable, spinning lockdown policies as tyranny of the weak. Happily, relentless jawboning of the populace with accusations of “cowardly compliance” has cut no ice.

Also problematic is the provision for medicos to cause disfavoured patients to die, a course of action uncomfortably close to what is known to the law as murder, or at least possible grounds for a civil suit. The legal risk has been noted in the public domain: eg, Coronavirus triage protocols: Hard choices over ventilator shortages shouldn’t put doctors at legal risk.

The moral issue is sometimes camouflaged by an ambient fog of ableism and ageism, which can make it seem “natural” that the lives of older and/or disabled people are intrinsically worth less, or even worthless.

To escape this framing, consider how we would react to a Cannibalism Protocol, say, with learned ethicists pondering “hard choices” and “difficult decisions”, like whether to recommend eating older or younger subjects first; or the relative nutritional value of the cannibalised meat from divers human categories. We instantly grasp that cannibalism is taboo so that establishing a protocol is out of the question: whichever victim is selected, his/her killing would be a crime, and no protocol based on it could be countenanced.

Similarly, with the intentional denial of Covid treatment to a patient with prospects of recovery, with knowledge that the patient will die as a result. That protocols on those lines have been officially published is regrettable, and they cannot be allowed to stand. Their continued existence, even hollowed out to almost empty shells by exemptions, expressly accepts lethal discrimination as an option.

It is much better for medicos simply to focus entirely on using their training and expertise to fight disease and death, whatever the extraneous characteristics of the patient in their care. As our defenders, not hanging judges, they should be spared the need for discriminatory “hard choices” and “difficult decisions” to add to their stress

2. Social Cleansing. Such policies seem old-hat, but we have recently experienced more specific variants around the world in the form of ethnic cleansing and religious cleansing.  For a few, age or demographic cleansing to cull “useless eaters” now beckons.  This is so morally unappetising that it is unlikely to be overtly promoted, although some commentators have come close. Covid deaths are sad, but…through the film of crocodile tears a glint of unholy opportunism sometimes shows.

3. Utilitarianism applied to human life as a tradeable commodity.  Weighing one life against another tempts some medicos, and should be unequivocally ruled out. An even more indefensible variant is the Neo-Aztec penchant for trading human lives against mere perceived economic benefit on the assumption that “only” older persons have been dying.

Australia has done brilliantly in physically combatting Covid19, and now is a good time to respond to the viral moral threats enlivened by it. Should we join the motley crew aboard the Trolley-car?  Given where it’s headed, maybe not. 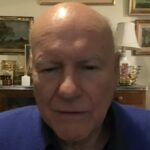 Dr Peter Freckleton is a barrister and quondam academic, with a doctorate in Linguistics (Paris). Through Post Polio Victoria and Polio Australia, he is developing an interest in human rights law.