One of the findings of the recent review of the operations of the National Disability Insurance Scheme (NDIS), conducted by Mr David Tune was that, “some participants feel NDIA staff do not understand disability or appreciate the challenges people with disability face as part of everyday life”..

In the context of the Tune Report, the essential failure of the successive Ministers and bureaucrats charged with the responsibility of delivering a coherent NDIS program is their complete lack of an ontological, epistemological and philosophical base concerning the meaning of disability. In many ways the NDIS is being driven by a rehabilitation approach whereby funds will be provided to “fix” or lessen the impairment. The over-riding concern should be to ensure that people with disabilities get to enjoy the same quality of life opportunities as the rest of the community. If those who administer the scheme were more aware of the lived experiences of people with disabilities and their families, they would appreciate that the major barriers to their quality of life is the stigma and the stereotypical attitudes they experience.

The precepts of normalisation taught by Bengt Nirje from Sweden and Wolf Wolfensberger from North America, which inspired the deinstitutionalisation movement in the 1970s and 1980s, continue to have relevance today. Nirje asserted that people with disabilities should have the same “patterns of life” which all people enjoy and Wolfensberger proposed that they should have “valued roles” in society.

Much more needs to be done in this respect before we shall see a truly inclusive community where people with diverse physical, sensory, psycho-social and cognitive characteristics are fully accepted as fellow citizens on a genuinely equal basis.

In its mandatory reports to the United Nations on its support of the Convention on the Rights of Persons with Disabilities (UN CRPD), the Australian Government highlights its strong commitment to the Articles of the Convention by reference to the great work of the NDIS. However, the United Nations response to Australia’s most recent Review of the CRPD points to a number of concerns about the implementation of the NDIS, one of which is its continuing heavy reliance upon the medical model of disability for the assessment for eligibility.

My first major concern with the NDIS in the context of the Convention, is the lack of an effective mechanism to provide inter-sectorial collaboration between the apparent silos of State/Territory and National Government Departments which provide generic services to people with disabilities. One of the underlying principles of the NDIS is that recipients as far as possible must also access generic services such as health, transport and education.

State/Territory Governments, through agreements with the Commonwealth, have almost abdicated the field of direct service provision entirely. I have yet to see any effective mechanisms whereby the NDIS is capable of ensuring people with disabilities and families will be able to navigate the complexities of inter-sectorial bureaucracies, at both State/Territory and Federal levels. For many people the complexities are insuperable.

It must also be realised that the NDIS, when fully operational, will only provide direct financial support to just over half a million people deemed to have high support needs. That leaves a very significant number of people with disabilities, not deemed eligible for a NDIS financial package, fully reliant upon generic community supports.

My second concern is more philosophical and moral, relating to the acceptance by the community generally of a mutual responsibility for its citizens with disabilities. The NDIS is touted as a major breakthrough, because it is an insurance-based scheme which brings the certainty of an entitlement policy. This is claimed to be a significant paradigm shift from a welfare-based approach. Insurance policies may bring a certainty of funding, but they do not ensure people will care.

One critical way in which resources must be directed is towards building community capacity and the development of social capital. Whilst disability policies in the western world are moving strongly toward supporting person-centred planning, individual choice and the allocation of support resources to individuals, rather than to service organizations; there is a danger that generic community resources and natural supports will not be sufficient for personal plans to be realized.

Despite the rhetoric, I sadly believe most current western, and to some extent, developing country government policies, remain captured in the neo-liberal belief that market forces result in a more equitable society. This is a contestable position and leaves the most vulnerable, including those with disabilities, dangerously exposed.

The quality of life and social inclusion of people with disabilities will, to a large measure, depend upon external socio-political-economic forces. Their level of acceptance as fellow human beings and citizens will also be influenced by the humanity and compassion of the general community. Those advocating for this population need to engage with the wider community in its journey towards quality of life and happiness.

Thus far, we have been too focused on the needs of people with disabilities in isolation from those of the wider community. In other words, we have not been sufficiently strategic in our thinking, our policies or our actions.

The elephant in the room in the context of the Tune Review is its lack of attention to the formidable gap in the numbers of adequately trained support staff required to assist people who have received NDIS support packages. Advocacy groups have been extremely vocal about this omission.

Factors working against the recruitment of committed and adequately trained people include the casualisation of the workforce brought about by the NDIS pricing mechanisms, and the cessation of in-house training the larger not-for-profit organisations used to provide to their more permanent employees through their own Registered Training Organisations.

The responsibility for training now rests with the TAFE systems and private vocational colleges where training fees are now the direct responsibility of the support staff. To make matters worse, many jurisdictions have been gutting their State/Territory TAFE Colleges through permanent staff retrenchments and a reduced suite of training courses available across the sector. This has been the Cinderella of the Tertiary Education sector for decades. On a less negative note, the Victorian government last year made TAFE courses in disability services free, but had to halt enrolments after 19,000 signed up and it became clear that not all could be accommodated for the required industry placements.

The NSW TAFE is basically strangling opportunities for people to complete a successful Certificate III program in Individual Support (Disability). It appears this system is not about preparing workers who will provide person-centred support to people with disabilities, but about compliance to a rigid set of mechanisms which are inordinately challenging for both students and staff. The amount of field-work supervision and in-class assessment exercises is leading to a situation where the TAFE staff have limited time in their weekly schedule to actually teach the course components.

The situation is exacerbated by the high enrolment of people where English is their second language. The application of sound quality standards is to be applauded, but adequate skilled teaching resources need to be available so genuine outcomes will be realised. The essential requirement in any training program must be opportunities for students to experience first-hand the lived experiences of people whom they will be called upon to support.

The underlying mission of the NDIS is too valuable for it to be allowed to fail. However, it appears to lack people on the governing Board of the National Disability Insurance Agency (NDIA) and the senior NDIS Management Team with the deep understanding of the lived experiences of people with disabilities. This lacuna seems to be also evident further down its food chain.

I await with guarded optimism for a timely and meaningful response by the Federal Government to the Tune Report which needs to go beyond a window-dressing exercise. 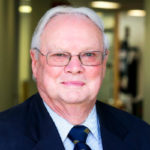 He held the conjoint position of the Director of the Centre for Disability Studies at the Royal Rehabilitation Centre Sydney. Former positions include Professorial Fellow and Director of the Unit for Community Integration Studies at Macquarie University; prior to which he held teaching and administrative positions in the New South Wales Department of Education and Training.

He is a Past President of the International Association for the Scientific Study of Intellectual and Developmental Disabilities (IASSIDD).