U.S.-China fight to lead planet earth will be decided “within 15 years” 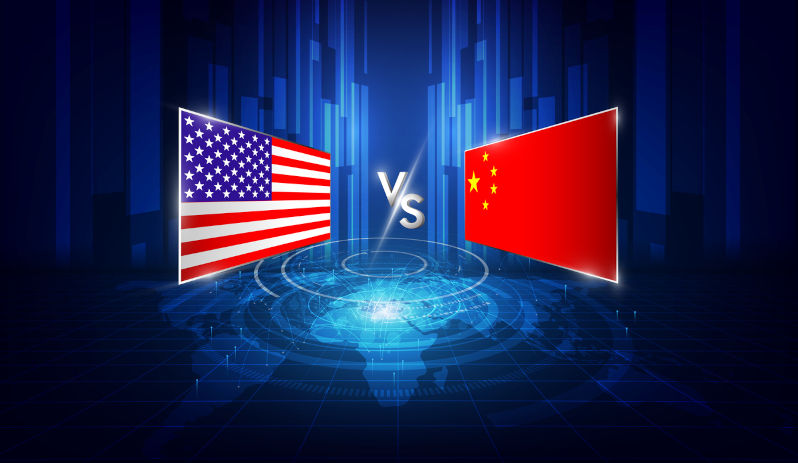 The clock is ticking on which of the two superpowers will gain primacy over the planet – a lead which will last indefinitely, becoming unassailable, a stunning new study shows

U.S. leadership over the planet would lead to a colonial model as seen in recent centuries, with the west assertively pushing its values, says a book by a top London geopolitical expert

Chinese leadership will lead to a multipolar world, given China’s lack of interest in spreading its system of governance to other countries, and preference for trade over militarism.

WILL CHINA OR THE UNITED STATES own the future? The balance of geopolitical power will be decided in the coming 15 years or sooner – and once it is made, it will not be reversible, says an eye-opening new study.

The clock is ticking.

The likely key factor is technological power, and how it is entwined with economic and military power, according to China and America’s Tech War from AI to 5G, a detailed examination of the east-west battle for supremacy by geopolitics specialist A. B. Abrams from the University of London.

“While it is a near certainty that China or the United States will be the dominant technological powers of the twenty-first century, Beijing and Washington have profoundly different visions for the nature of world order and the future of humanity,” Abrams says.

If the US wins, humanity will see that country taking its usual assertive stance, pushing its particular vision of governance as a universal system for all people. The result will be “a continuation of a centuries-old world order dominated and shaped by Western power, with the U.S. being the successor to the empires of Britain, France, Spain, Holland and Portugal”.

If China wins, the world will return to humanity’s long-term state of affairs, with the world being a planet of multipolarity, with various regional leaders. “China had been the world’s largest economy and the leader in science and technology for most of human history until the Opium Wars entered it into its most calamitous century,” Abrams writes.

“The millennia when China was the world’s greatest power saw a laissez faire international order in which the East Asian state demonstrated little ambition for global empire or the imposition of its ideology, way of life, religion or method of governance abroad in stark contrast to the Western-led order which succeeded it.”

In other words, the West is likely to continue to use its military, economic and other strengths to “recommend” its way of governance on others, looking to create a homogenous replica of itself, while China will continue to ask only for power within its own borders, as it presently does, and looking for profitable win-win relationships outside.

“A gradual return to this kind of multipolarity is expected should China prevail in the current economic and technological competition,” the study says.

Who’s winning? What are the current strengths of the two systems? While China has a population of great size, the US, as the world’s richest country, with control over the international media, has huge advantages.

“China today is unrivalled in the prevalence of technical skills in its workforce, in the concentration of manufacturing supply chains on its territory, and in the speed of its economic growth,” the book says. But while China may have more technicians, the US has a strong grip in multiple areas.

“The United States by contrast has the advantage of a much greater global influence established primarily through soft power and the export of its media and ideology, the global reach of its military and intelligence agencies, its large network of treaty alliances, and its position at the center of the global financial system.”

The Western vision that one type of democracy would take over the world was never going to happen, Abrams says. “Human nature dictates that successive generations will have a tendency to experiment with new ways of thinking and of organising themselves, meaning an eternal ‘Western liberal democracy’ for the whole world as Fukuyama and others predicted was never realistic.”

“AI-driven automation in factories will undercut the one economic advantage developing countries historically possessed: cheap labor. Robot-operated factories will likely relocate to be closer to their customers in large markets, pulling away the ladder that developing countries like China and the ‘Asian Tigers’ of South Korea and Singapore climbed up on their way to becoming high-income, technology-driven economies. The gap between the global haves and have-nots will widen, with no known path toward closing it.”

But while the US has many visible advantages, there are also growing challenges, the study says.

“As annual interest payments on debt are set to surpass the entire Pentagon budget before 2030, the state of its economy could force very deep cuts to government spending and otherwise seriously impede America’s ability to compete in the tech war. Beyond these economic issues, the US tech sector’s extreme reliance on foreign talent remains another serious issue which would require unprecedented reform of the education system and education culture to resolve.”

The Western media is creating a widening divide which could see Asian talent in the west being driven back to the east.

“As China is vilified in Western press there are growing signs that East Asian talent in particular, increasingly alienated by discrimination, government suspicions and rising hate crimes, will look abroad,” Abrams says.

“China has the important advantages of a larger, faster growing and significantly healthier economy and industrial base.”

One of the most fascinating observations in the book is that China’s much maligned political system is actually a better one for technological development. 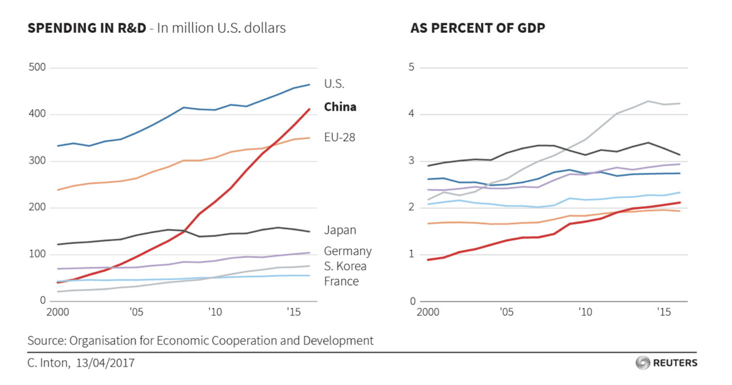 This Reuters diagram (above) shows long term investment from China. Below is a McKinsey chart. 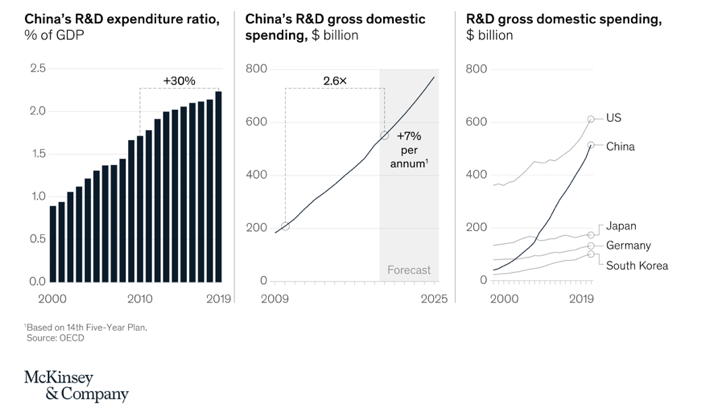 China’s political system has also increasingly been seen even by Western analysts as better suited to supporting a world leading tech sector. A notable example was government funding of R&D in key areas which had been a consistent part of Chinese economic planning since the 1950s, and which in sharp contrast to the US grew steadily as a percentage of GDP keeping up with the country’s rapid economic growth. This ensured funding in strategic areas where the private sector may otherwise not have been willing to work.”

This same point was strongly made by writers in the MIT Technology Review: “Governments [as opposed to business people] are more likely to fund long-term, risky bets like clean energy, sustainable materials, or smart manufacturing—the kinds of technologies the world really needs right now . . . it’s become increasingly clear in the West that while the venture capital model is good at building things people want, it’s less good at producing things society needs in order to solve hard, long-term problems like pandemics and climate change.”

But will east or west ultimately rule the world? It’s too early to say. In terms of terms of global influence, military reach, grip on the media, and control of international finance, the US is well ahead.

Yet several observers say that China has some surprising leads already. Abrams points to a December 2021 report from the Harvard Kennedy School of Government, which said that only a “national response analogous to the mobilisation that created the technologies that won World War II” had a chance of preventing total Chinese dominance of “the technologies of the future.”

That study concluded that in some areas China “has already become No. 1. In others, on current trajectories, it will overtake the US within the next decade.”

What’s for sure is that drama lies ahead.

The tech battle is heading into areas filled with potential “game-changers”, including AI, biotechnology, genetic engineering, quantum computing and neuroscience experimentation, where humans could have implants changing the way we think. Whatever happens, humanity is in for major changes in the way we live, operate and communicate. Abrams warns that “the tech war will likely end in a very different world to that which existed when it began”.

China and America’s Tech War from AI to 5G: The Struggle to Shape the Future of World Order by A. B. ABRAMS is published by Lexington Books. Interested readers can order the book here.