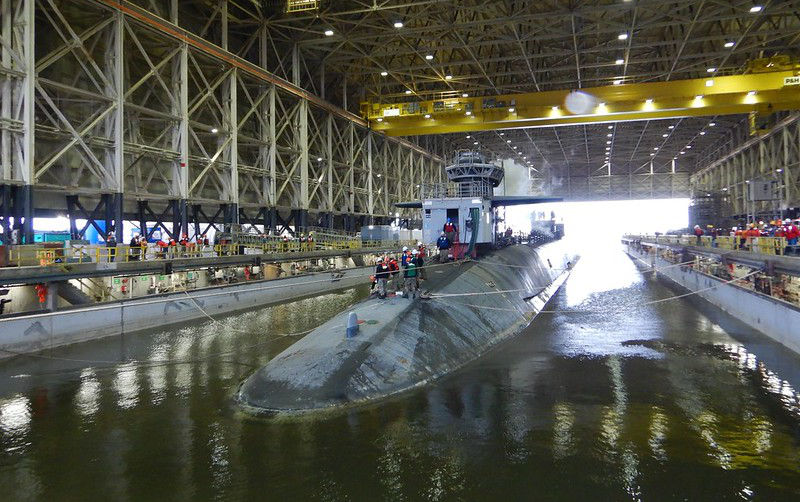 High-ranking US naval official points to shipyard and labour constraints that could push delivery well beyond 2030.

In the latest blow to Australia’s ambitious plans to acquire nuclear-powered submarines, overstretched US and UK shipyards may not be able to supply Canberra with the boats within the decade as outlined in the three sides’ AUKUS agreement, according to reports in late August.

At a recent Mitchell Institute for Aerospace Studies seminar, US Navy Rear Admiral Scott Pappano was asked if the AUKUS arrangement to supply Australia with nuclear subs would burden or draw crucial resources away from the US’ own sub-building plans.

“If you are asking my opinion, if we were going to add additional submarine construction to our industrial base, that would be detrimental to us right now without significant investment to provide additional capacity, capability to do that,” said Pappano, emphasising that the same capacity situation exists in the UK.

His statements contrast with earlier comments made by Australian opposition leader and former defence minister Peter Dutton this June saying that the US could provide the first two nuclear subs by 2030, without providing material evidence such a timeline was in place.

In those comments made on national television, Dutton expressed confidence that the US would pull out all the stops to help Australia acquire nuclear submarines. Pappano’s statements, however, would appear to shoot down the possibility of such an early delivery.

Pappano mentioned workforce issues as a drag factor, noting that securing skilled naval shipyard workers such as casters and moulders is increasingly difficult as many of these labourers have shifted from manufacturing to services.

A 2017 study by RAND mentions declining levels of workforce experience in US shipyards, noting productivity drops when experienced workers are replaced with less-experienced ones.

The study also says ageing US nuclear subs and increased workloads on the US carrier fleet have caused more work in fewer maintenance periods, resulting in less frequent availabilities for skilled workers and inefficiencies in project execution.

Such challenges will no doubt affect how fast the US may be able to supply nuclear subs to Australia.

Furthermore, an August 2022 report from the US Congressional Research Service (CRS) shows that the US is struggling to fulfil its own nuclear submarine requirements.

The report states that the US Virginia-class nuclear submarine program has experienced “cost growth” in its early stages and is now suffering from spare parts shortages, maintenance delays and concerns about shipyards’ capacity to deliver.

The increase in workload includes doubling the production of Virginia-class subs to two boats a year and introducing the new Virginia Block V variant, which has a 25-meter midsection that can house 28 Tomahawk cruise missiles.

Moreover, the US is phasing out its ageing Ohio-class ballistic missile submarines for the new Columbia class. The first boat is projected to enter service in 2027, with 12 Columbia subs slated to replace the 14 long-serving Ohio-class units, which first entered service in 1976.

He notes that as current US nuclear submarines enter mass retirement in the 2020s, the total number of boats will decline as production likely fails to catch up.

This delay will open a submarine capability gap starting in 2027 when China’s threat of invading Taiwan is believed to be at its peak. It is thus highly likely that the US will not allow Australia’s request for nuclear submarines to jeopardise its own defence requirements.

Senior defence analyst Brent Sadler notes in a Nikkei report that added capital investments from Australia could boost the submarine supply base in the US, adding to US capabilities to supply nuclear submarines for AUKUS while not jeopardising its own submarine program.

Asia Times has noted that Australia could revisit the idea of long-range conventional subs while waiting for nuclear ones.

However, Australia canceled its agreement with DCNS due to technical, cost, systems compatibility, labor and construction timeline issues in favour of acquiring nuclear submarines from the US and UK.

But limitations in US and UK nuclear sub-building capabilities may force Australia to keep its Collins-class subs in service for much longer than previously planned.

As such, Australia may want to consider other large conventional boats such as derivatives of the Israeli Dakar-class or the South Korean KSS-III-class.

Australia may also consider using unmanned submarines to fill in its underwater warfare capability gaps until replacements for their Collins-class boats enter service.

Asia Times has reported on Australia’s efforts to develop unmanned submarines, which it can potentially deploy to cover chokepoints in the Lombok, Sunda and Makassar Straits, areas where its Collins-class boats and their planned crewed replacements will most likely operate.

In addition, Australia might acquire a second-hand UK Astute nuclear submarine instead of a US Virginia-class boat.

Defence News reports this month that Australian submarines are training alongside their UK counterparts aboard the newest Astute-class submarine, the HMS Anson, familiarising the latter with the UK-made submarine’s systems.

The Defence News report mentions the UK has seven planned Astute-class boats, five already in service and two in advanced stages of construction slated to enter service in the mid-2020s, with a replacement already in the works.

First published in the ASIA TIMES on September 2, 2022