US Indo-Pacific Strategy is built on false assumptions about ASEAN 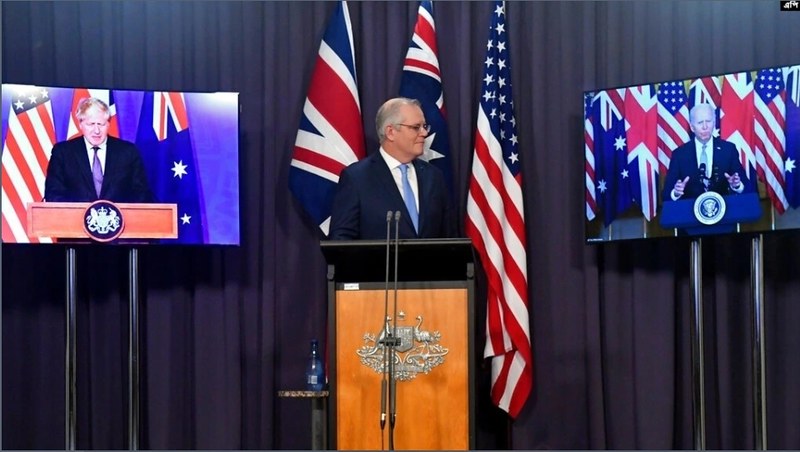 Under the guise of AUKUS, the U.S. military will expand its use of Australia as a base for its surveillance and deterrence of China in the South China Sea and the Indian Ocean. (Flickr / van huy nguyen)

The agenda of the new US Indo-Pacific Strategy for Southeast Asia is based on false assumptions and ignores fundamental differences between them and the U.S.

The US’s long awaited Indo-Pacific Strategy (IPS) is finally out. Southeast Asia and its regional organization, the Association of Southeast Asian Nations (ASEAN), figure prominently in it. But its agenda for these countries and the organization is based on false assumptions and ignores fundamental differences between them and the U.S.

The IPS prioritizes ASEAN’s aspiration of centrality in regional security.  It says “We endorse ASEAN centrality and support ASEAN in its efforts to deliver sustainable solutions to the region’s most pressing challenges.” The U.S. intends to contribute “to an empowered and unified ASEAN”. This hits the right notes. But the very next stated means of accomplishing IPS goals is by “strengthening the Quad and delivering on its commitments”; and “supporting India’s continued rise and regional leadership”. These objectives are internally contradictory. The U.S needs to explain in detail to ASEAN and convince its members –particularly its de facto leader Indonesia – how exactly it intends to do this simultaneously without favoring one over another.

The IPS references to upholding international law including the UN Convention on the Law of the Sea ring hollow to Southeast Asia. The U.S.– unlike most ASEAN members — has not ratified it. Indeed the U.S. often challenges with warships Southeast Asian nations’ maritime claims and regimes. This is a form of coercion that the IPS says China is using to get its way in the South China Sea.

Another significant problem is that ASEAN and the U.S. have fundamentally different visions for the region. The U.S. vision of an implicitly anti-China, security-oriented Free and Open Indo-Pacific contrasts with ASEAN’s inclusive [including China], less militaristic Outlook on the Indo-Pacific. Indeed the IPS says China is “combining its economic, diplomatic, military, and technological might as it pursues a sphere of influence in the Indo Pacific and seeks to become the world’s most influential power.” The IPS intends to prevent this by building greater coordination with allies and partners “across war-fighting domains”.

U.S. driven actions—the Quad, AUKUS, and military shows of force tell the real story.  Contrary to supporting ASEAN centrality in security affairs, the US and its partners undertook these actions in part because they perceived that ASEAN has been ineffective in dealing with regional security issues like the South China Sea dispute.

The IPS gives the Quad and AUKUS as examples of its implementation. The Quad –short for Quadrilateral Security Dialogue– is a security forum of Australia, India, Japan, and the U.S. that purports to maintain a ‘Free and Open Indo-Pacific’.  The Quad countries have already undertaken several joint naval exercises. Despite denial, the U.S. clearly hopes it will become an anti-China security partnership and is pushing it in that direction despite reservations by India, perhaps Japan and certainly some Southeast Asian countries. Indeed, the IPS says “We will strengthen the Quad as a premier regional grouping”.

AUKUS is an agreement between Australia, the U.K. and the U.S for the U.S. and the U.K. to supply nuclear powered submarines and underwater drone technology to Australia. A major use of these assets will be to maintain the ‘balance of power’ in the South China Sea. More significant,  under the guise of AUKUS, the U.S. military will expand its use of Australia as a base for its surveillance and deterrence of China in the South China Sea and the Indian Ocean.

Indonesia and Malaysia and probably other Southeast Asian states are not convinced that AUKUS will be beneficial to them and the region. Even US allies and partners are skeptical. Singapore’s Foreign Minister Vivian Balakrishnan said it is reasonable for Southeast Asia to call for external powers to engage the region on “our own merits rather than be seen purely through the lens of the US-China competition.” In reaction to AUKUS, Nguyen Hung Son, Vice President of the Diplomatic Academy of Vietnam said ”One should ask what is the relevance of the ASEAN and whether the centrality that ASEAN and its partners talk about is just lip service__”.

The IPS states that “Our objective is not to change China but to shape the strategic environment in which it operates, building a balance of influence in the world that is maximally favorable to the United States, our allies and partners, and the interests and values we share”.

But just what are the values that the U.S. shares with ASEAN autocracies like Brunei, Cambodia, Laos, Myanmar, Thailand and Vietnam? The only Southeast Asian countries invited to the Summit for Democracy were Indonesia, Malaysia, the Philippines, and Timor-Leste. That so few Southeast Asian countries were invited ”underscores that most of that region’s governments do not, in fact, share U.S. democratic values.” Behind the verbal veil, the IPS is essentially saying that the US-Southeast Asia commonality is fear of China. Indeed this is best exemplified by Vietnam –a particular “target’ to be a partner in this anti-China effort.  But the fact is that some Southeast Asian states like Cambodia and Laos have made their accommodations with China and do not fear it.

The IPS says that “We will drive initiatives that reinforce deterrence and counter coercion.”  The problem here is that the U.S. is building up its military presence and threatening use of force against China in the South China Sea and this is making ASEAN members very nervous regarding the collateral damage they may suffer from a kinetic conflict.

Further even the so-called democracies of Malaysia and Indonesia do not share common values with the U.S. when it comes to domestic politics – let alone world views. The IPS states that the U.S. “will be a partner in strengthening democratic institutions, the rule of law, and accountable democratic governance.” This will be accomplished through investments in democratic institutions, a free press, and a vibrant civil society.” This sounds like interference in countries internal affairs –something that goes against basic ASEAN principles and will not be welcomed by most Southeast Asian countries –even those so-called democracies.  The US intent as stated in the strategy to convene more ASEAN- US summits– and throw more money ASEAN’s way will not bridge the values gap. If US policy makers really believe that the U.S. shares fundamental values with these countries, then they are setting the U.S. up for yet another foreign policy failure.

The U.S. continues to delude itself even as to the history of its relationship with the region. The IPS says “For 75 years [since the end of WWII] the United States has maintained a strong and consistent defense presence to support regional peace, security, stability and prosperity”. This oft-repeated mantra by US policy makers and DC think tank analysts ignores the US role in suppressing Vietnam’s liberation movement and its support of bloody coups and the resulting reign of horrific human rights violators in Indonesia (Suharto), the Philippines (Marcos) and Taiwan (Chiang Kai-shek).   Were these examples of values the U.S. shares with ASEAN and ‘in support of regional peace’?

Regarding Southeast Asia and ASEAN, the US Indo-Pacific Strategy reads like a committee–produced mishmash of delusions, false assumptions, wishful thinking and contradictions. It is going to be a hard sell to ASEAN members individually and as a whole.

A different abbreviated version of this piece appeared in the South China Morning Post. https://www.scmp.com/comment/opinion/article/3167301/why-us-anti-china-indo-pacific-strategy-dangerous-deluded-and