Edie was diagnosed with younger onset dementia at age 59. She lived with the disease for 10 years. At the time of her diagnosis, Edie was working as a driving instructor and had previously worked as a teacher of the deaf, specialising in maths and as a Masseur.

Although many Australians associate dementia as a disease of the elderly, dementia can happen to anyone. In Australia, there are currently an estimated 28,300 people living with younger onset dementia, that is dementia diagnosed before the age of 65.

For years after her diagnosis, Edie, alongside her wife Anne, dedicated herself to dementia awareness and to improving the lives of people living with dementia, especially those living with younger onset dementia.

In 2015 she delivered the Keynote Opening Address at the Alzheimer’s Disease International Conference in Perth – welcomed by a standing ovation. That same year she presented at the Let’s Talk About Sex: Relationships and Intimacy As We Age conference in Melbourne.

In 2017 Edie spoke in the Victorian Parliament at a Parliamentary Friends of Dementia event, bravely sharing to a room full of MPs why ‘a good death was her right’ during the voluntary assisted dying debate.

Aside from major conferences, Edie spoke at launches, seminars and smaller meetings. Her candour, wit and humility touched all at every event she spoke at.

It was important to Edie that Ballarat, the community in which she lived, was welcoming, accepting and accommodating to people living with dementia.

Her work to make Ballarat a dementia-friendly community included, together with Anne, establishing the Bigger Hearts, Dementia-Friendly Ballarat campaign and Alliance in 2016. To this day the alliance remains strong and active. Since its inception, it has created films, hosted events, directly supported people impacted by dementia and attracted the support of key business and community leaders.

In recent years Edie was a consultant to Parks Victoria on the development of the dementia-friendly sensory and forest trail established in Ballarat’s Woowookarung Regional Park. This may be her single greatest legacy.

In the same year, Edie and Anne established Bigger Hearts, both received the Outstanding Achievement by a Volunteer: Supporting Diversity Award at the Victorian Minister for Health Volunteer Awards, as well as Honorary Membership of the then Alzheimer’s Australia Vic.

Edie contributed to policy papers, reports and various government submissions by Dementia Australia, and as a member of advisory panels that have gone on to influence decision making federally and in Victoria governments. Edie and Anne participated in multiple research projects, most notably the Younger Onset Dementia Assistance Dogs project which brought the much-loved Melvin into their lives.

Edie and Anne were always willing to share their experiences with dementia in the media including Ballarat’s The Courier, The Age, The Guardian, SBS, ABC 7:30 and many more news outlets. Their willingness to share and speak out about dementia through the media helped spread much-needed awareness to thousands of people over the years.

Edie was incredibly generous with her time and her work and was always guided by her drive to help others, now and for generations to come. The legacy of her dedication to her advocacy work will have an enormous and lasting impact on the lives of all people living with dementia, their families and carers. 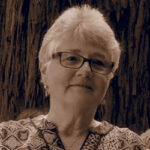 Anne Tudor is a Dementia Advocate.