The scale of the coronavirus disaster in Victoria has been more than two decades in the making.

The political failures are not those of the Andrews Labor Government alone but also of the Bracks and Brumby administrations.

There is also blame to be shared with the Baillieu and Napthine governments and reasonably a need to examine some of the policies and actions of the Kennett governments.

At issue is the decline of the public service that is evident in its decreasing competence, capacity and capability notwithstanding spiralling operational budgets, expanding workforce and increased wages and benefits.

The public service no longer can be relied on for fair and fearless advice to government nor for expert technical expertise.

The public service has been politicised and effectively dumbed down by Labor governments which have controlled Victoria for all but four years of the past two decades.

The blame that could be attributed to the Baillieu and Napthine governments is that they did not shakeup the bureaucracy by replacing Labor appointed department heads and exposing the politicisation.

The examination of the policies and actions of the Kennett Government might productively consider the safeguards and capability retention that accompanied privatisation measures and restructuring in the 1990’s.

The loss of the 1999 state election deprived the Kennett Coalition Government of the opportunity to bed down many of its reforms, reforms that were crucial to revitalising a state left in financial ruin by the Cain and Kirner Labor administrations.

However, there is still reason to examine that period where, for instance, private contractors were empowered to undertake building inspection approvals after municipal councils had choked construction and driven up development costs.

A positive initiative yet the Victorian Building Authority failed to provide the oversight necessary and some private contractors fell well short of professional standards.   The problem with certification by private contractors is that they don’t get work if they are perceived as too tough by the builders

There is much discussion about red tape and environmental regulation described as green tape with the focus on reducing the level of regulation.

Regulation has a place in our economy and some of the proliferation in red and green tape is due to the failure of regulators and the public service to enforce existing regulations.

A classic example of that situation is the Environment Protection Authority which failed to enforce regulations on toxic waste storage and apparently also found wanting in the issue of the toxic soil from the current West Gate tunnel project.

The fact is, at both state and federal government level, regulators have too frequently become far too cosy with the industry players they are supposed to oversight.

We ended up with a Royal Commission into the banking and financial services sector because the regulator failed in its oversight role.

The Australian Securities and Investment Commission can take years to finalise some of the most straightforward of corporate and director breaches of law.

A Senate Inquiry was required to investigate massive problems in the franchising sector which apparently did not ring many alarm bells at the Australian Competition and Consumer Commission which is responsible for the Franchising Code of Conduct.

There are numerous examples of Victorian regulators who have also failed including, for example, the Department of Jobs Precincts and Regions to collect sufficient funds from mining projects to pay for project rehabilitation costs, leaving the taxpayer to foot the bill.

Another example is VicSafe, which has lost more than $1.4 billion in the 18months to December 2019.

VicSafe was found by the Victorian Ombudsman to be adopting immoral and unethical practices after external insurance agents were offered financial incentives to terminate coverage for injured workers who were eligible for support.

The CEO, chairman and some board members of VicSafe had the good grace to resign ahead of the Ombudsman’s report.

The role of WorkSafe in the management of the coronavirus pandemic is no doubt worth investigation as well given that little information was provided to employers or, apparently, on vulnerability assessments of particular industries and workers employed at multiple workplace locations.

Exposing the problem of capacity and capability in the public service at this time, you need to look no further that the debacle of Fines Victoria’s computer system or any other number of information technology projects.

Then there is the revelation of under-funding for the critical communicable disease and prevention control unit under the Victorian Chief Health Officer, the unit that is responsible for contact tracing in the current coronavirus crisis.

Just as damning is the Victorian Auditor General reporting that the Department of Education and Training is using data from 2001 and 2002 to determine current funding allocations for schools.

A stark example of the politicisation of the public service is the decision of the Andrews Labor Government to relocate the Victorian Multicultural Commission into the department and under the direction and control of the Minister’s office.

The VMC was an independent body that administers grants and provides advice to government until the Andrews Labor Government took it over.

The Commissioners are now dutiful Labor apostles and, not surprisingly, the former Minister for Multicultural Affairs, forced to resign in the Somyurek faction branch stacking scandal, has been accused of signing off on nearly $1 million worth of grants issued to organisations linked to alleged branch stackers and ALP staffers during his four-year term.

Mind, I have a motion on the Legislative Council notice paper to restore the independence of the Victorian Multicultural Commission but my colleagues have no appetite for that debate and raised not a whimper at the partisan commissioner appointments.

It is interesting to note the burgeoning cabal of commissioners established by the Victorian Government.

There are still more and each with staffing and facilities doing jobs that, for the most part, should surely be responsibilities of existing government departments.

More fundamentally, are they really necessary because the public service is broken and can’t be trusted to deliver services and to safeguard the rights and interests of Victorians?

The heavy hand and political agendas of Labor administrations has dramatically expanded the public sector yet stifled talent and suffocated ideas and innovation.

Ministers and ministerial staffers have compromised the independence of the public service to the detriment of Victoria in respect of unsatisfactory service standards and diminished safeguards for community safety and health.

Of course, there is little need to point out that this situation has a very real and substantial financial cost and is central to the erosion of trust in government and our democracy.

It also undervalues the many dedicated public servants who are committed to working in jobs where they can make a positive difference to our community.

The challenge now is to restructure, rebuild and empower the public service, creating a robust, independent, capable, competent and properly resourced public sector. 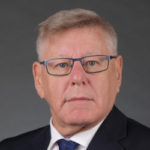 Bruce Norman Atkinson is an Australian politician. He has been a Liberal member of the Victorian Legislative Council since October 1992, representing Koonung Province from 1992 to 2006 and Eastern Metropolitan Region since. He was the President of the Legislative Council from 2010 to 2018.