Voter ID another step on the road to US-style dysfunction 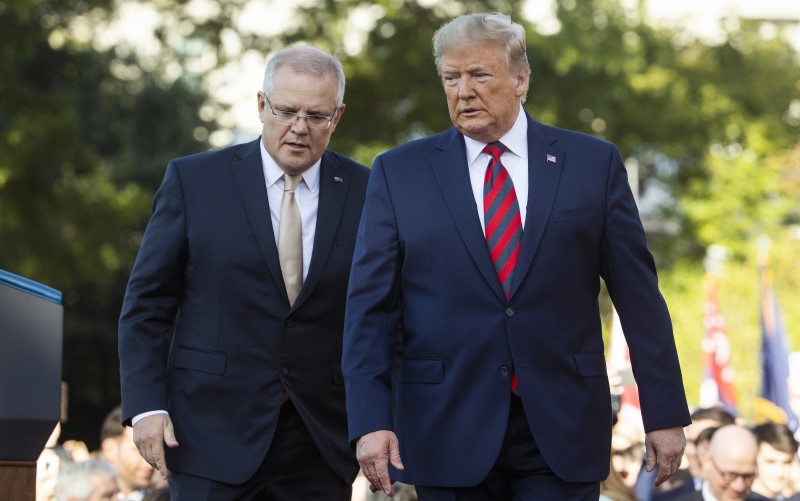 Scott Morrison and Donald Trump: the federal government still trots out its shibboleth that our close dependent relationship with the United States is based on shared values. (Image: EPA/Jim Lo Scalzo)

Requiring ID to vote has caused disenfranchisement in the US, and the government’s push for a similar law is aimed at suppressing the Labor vote.

Our government made plenty of mistakes in handling the pandemic, but nothing on the scale of the criminal negligence that Donald Trump and his Republican allies were guilty of during his presidency. Even now, with President Joe Biden attempting to salvage the situation, vaccination appears the only way out.

But there are gathering signs that Australia has a particularly immature and sadly ill-informed set of “parliamentarians” and fellow travellers, mainly from the loony-right think tanks, who are keen to import some really bad American ideas. Of course the loony-right think tanks are another import we could do without, but that is another matter — we are stuck with them.

One reason the American system has faltered recently is that the traditions and myths of their origin story have been hijacked and politicised, and the myths have won out over common sense.

Some examples of bad American ideas include the notion of personal liberty outweighing the public good, the belief that public health systems are socialist and the idea that education is not a basic human right but something to be purchased.

Other caustic ideas include the notion that imposing regulations and limits on the private sector is always bad, that global warming is rubbish, that welfare is money wasted, that citizens should have the right to bear arms, that any relationship or family based on anything other than the classic nuclear family is immoral and that poverty is a sign of a vengeful god punishing the poor.

There are many other silly ideas, but I want to highlight the matter of voter ID, aka voter suppression, which is definitely on the radar for our very own Trumpist government.

Voter suppression is an ancient and honoured tradition in America, and it continues today. Since 1870, when the 15th Amendment was passed, all men (later broadened to include women) were guaranteed the right to vote. This included men of all races, and specifically former slaves. Southern states, still smarting from their loss in the Civil War, set about limiting Black access to the vote. These methods included a poll tax, or a fee to lodge a vote. Poor whites could gain an exemption from paying the fee, but not poor Blacks.

Literacy tests were also routinely applied, with many more black Americans being excluded than white Americans. This often related to the level of education achieved by black Americans, which was in most cases inferior, if it was even available. But in other cases, the tests were selective, with African-Americans often receiving more difficult ones. These measures were gradually phased out during the 1960s but not before they had disenfranchised generations of otherwise entitled voters.

More recently the Republican Party has refined its methods to suit the times. In Florida, for example, until recently convicted felons were ineligible to vote. Many with similar names to felons were wrongly purged from the electoral rolls. That law was reversed in 2018, but the Republican state government managed to circumvent the intention of the statute, known as Amendment 4, by making restoration of the right to vote almost impossible. In the 2000 presidential election, George W. Bush won the country by fewer than 1000 votes, while convicted felons, and some of those with similar names, were purged from the electoral rolls. Convicted felons were, by a huge margin, more likely to be black and to vote Democrat.

Although the presidential election last year was not decided by a tiny number of votes, Florida voted for Trump. As many as 1.4 million voters were eligible to be restored to the rolls, but only 300,000 were allowed to register. That is 1.1 million voters disenfranchised. That would make a difference to the result.

Of course, that could never happen here, or could it? We have no voter fraud here, so there could be no reason to change the voting rules. Well, yes, it could happen here. The federal joint standing committee on electoral matters has recommended that identification be required to vote and to enrol or change voting address. The chair of the committee is Senator James Paterson, a former Institute of Public Affairs (IPA) director. He thinks that if he has to show ID in a club, why not when voting?

Liberal members of the committee made similar recommendations in their reports on the 2013 and 2016 elections as well. They quoted several submissions in support, from the IPA and others. Labor and Green members opposed the recommendations but were outvoted.

There is a cynical reason for such a simple rule. The more disadvantaged you are, the more difficult it is to conform to what look like petty requirements. And the ID of choice for most Australians is their driver’s licence. Petty for you and me, but not if you have insecure housing or are forced to live on the starvation line or are fleeing domestic violence. And many disadvantaged people do not own or drive a car. That means they probably don’t have a licence, so they may be forced to buy some form of photo ID in order simply to vote.

The Liberals believe the disadvantaged are more inclined to vote for Labor, so any measure that makes voting or registering to vote more difficult is a good thing. There is a reason why most Australians despise the IPA and its ilk. They appear to be staffed by strangely inadequate individuals who dream of making life difficult, in a range of petty ways, for the vulnerable.

In instituting voter ID, we would need to accommodate Australia’s system of compulsory voting and compulsory enrolment to vote. That would arguably force the electoral commissions, state and federal, to implement inclusion measures such as provision of regulated photo ID for anyone who needs it. Obviously that would send the cost of elections through the roof. This is another example of unintended consequences caused by allowing inexperienced, or simply shallow, twits to write policy.