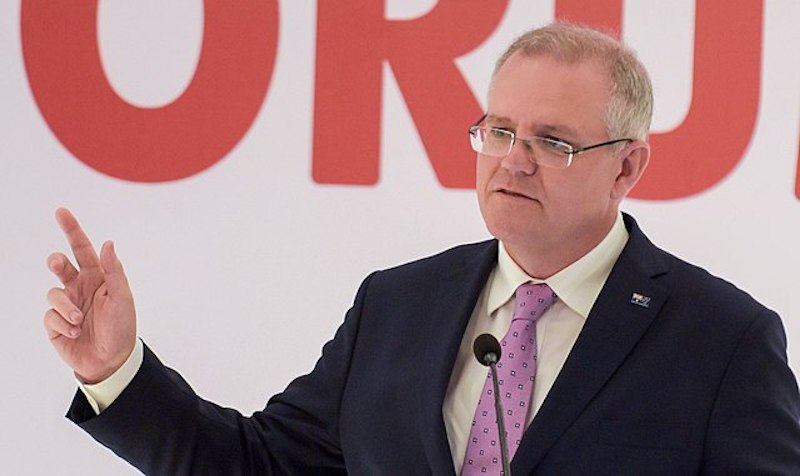 This time it’s Scott Morrison clinging to a straw. He and his colleagues are clearly thinking that if fear and war mongering have won the Coalition elections in the past, it’s worth a go again today. (Image: Wikimedia Commons / Australian Embassy Jakarta)

You’d think that after the Iraq Weapons of Mass destruction debacle the media would be just a little sceptical about US intelligence feeds.

But nothing seems to deter Western journalists in Canberra, London or Washington from broadcasting, without the slightest hint of doubt, US intelligence sources predicting a Russian invasion of Ukraine.

“My colleagues, every statement I make today is backed up by sources, solid sources,” US Secretary of State Colin Powell told the UN Security council in February 2003 when he laid out US intelligence evidence that Saddam Hussein’s regime possessed Weapons of Mass Destruction. “These are not assertions,” he said. “What we’re giving you are facts and conclusions based on solid intelligence.”

I don’t know if the Russians intend to invade Ukraine. But if Powell’s publicly delivered, thoroughly checked and endorsed intelligence was so wrong, how much more sceptical should we be about intelligence feeds from anonymous sources?

As far as I can see the US intelligence claims that Russia is about to invade Ukraine started to appear in the media around November last year.  The US Military Times said Russia was preparing for an attack by the end of January, or the beginning of February, with the attack involving airstrikes, artillery and armour attacks followed by airborne assaults in the east, amphibious assaults in Odessa and Mariupul and a smaller incursion through neighbouring Belarus,

CNBC also reported in November that Russia was about to invade.

Then on 8 December 2021 Associated Press joined the “cry bear” club telling us that US intelligence officials had determined that Russian planning was underway for a possible military offensive against Ukraine that could begin as soon as early 2022 and would include an estimated 175,000 personnel.

President Joe Biden gave the invasion a real boost at a press conference on 19 January when he said that he expected President Putin would order the invasion.

“Do I think he’ll test the West, test the United States and NATO, as significantly as he can? Yes, I think he will,” Biden said. “But I think he will pay a serious and dear price for it that he doesn’t think now will cost him what it’s going to cost him. And I think he will regret having done it.”

Asked to clarify whether he was accepting that an invasion was coming, he said: “My guess is he will move in. He has to do something.”

The following week US sources were saying that an invasion was imminent while Ukrainian leaders tried to hose down the fears generated by the claims.

Then we got a definite date. It was going to happen on Wednesday 16 February.

Now we’re told the invasion will be before the end of the Winter Olympics on Sunday 20 February. But then again maybe it’s a bit like calculating the coming of the millennium and we’ll find that they really miscalculated and meant the end of the Paralympics on 13 March.

If the Russians want to destabilise and damage Ukraine they could find no better way than to have the US whipping up this hysteria.

For whatever reason the US administration — no matter which of the two parties is in power – requires a bogeyman.  They had a good run with middle-east terrorists and governments: the Ayatollah Khomeini and Iran; Osama Bin Laden and Al Qaeda; ISIS, Saddam Hussein and Iraq; Assad and Syria; and Gaddafi and Libya. Each got a stint as the top-billing threat and a dose of US bombings, clandestine operations, sanctions and/or invasion.

Donald Trump promoted North Korea as the menace that would win him popularity but then, finding he was getting nowhere, moved back to promote China as US public enemy number one.

Since August 1945, unquestionably the US’s most beloved villains are the Russians.  First the threat was because they were communists and Soviet Russia was going to promote communism worldwide and challenge US capitalism.

But the fall of the Soviet Union and Russia’s adoption of capitalism did not change American attitudes. Russians as baddies was too ingrained in the American psyche.

The US needs to generate foreign enemies to justify the maintenance of and expenditure on its massive war machine and to distract its electorate from the country’s internal problems of inequity, poverty, race and class divisions.

For the Australian government, the Russian bear is a little too far distant as an electoral scare-mongering weapon. The Chinese tiger is the terror to be promoted.

Ignoring the fact that China is by far Australia’s largest trading partner, Defence Minister Peter Dutton has gone so far as to insult the Chinese President Xi Jinping by comparing China’s actions today to those of Hitler’s Germany in the 1930s.

“Some people want to pretend it’s not a reality in our lifetime … that was the attitude of the 1930s. We’ve got to learn the lessons of history and make sure they’re not repeated,” he said in an interview on Sydney radio station 2GB.

But the Chinese obsession and the targeting of the Labor opposition was too much even for our ASIO head Mike Burgess who, perhaps realising that his next boss might be a Labor minister, went on the record to say that foreign interference was against all members of parliament and didn’t go after one particular party or the other.

He also acknowledged that more than one country sought to interfere in the Australian political process.

Chinese Australian businessman Dr Chau Chak Wing was named in parliament as the “puppeteer” targeted by ASIO for foreign interference, but as he has donated to both the Coalition and the Labor sides of politics, the government will find it difficult to use him to score political points against Labor.

Prime Minister Scott Morrison and Dutton’s campaign will of course have one clear outcome. It will again whip up anti-Chinese and anti-Asian racism, a tried-and-true coalition tactic happily embraced by John Howard in the 1996 election when his dis-endorsed Liberal candidate Pauline Hansen delivered her anti-Asian, anti-indigenous lines. At that time Howard chose to be a Hansen fellow traveller.

And just as Morrison is today, Howard was way behind in the polls when fortuitously for him the September 11 2001, terrorist attacks occurred. Exploiting fear of invasion by distressed asylum seekers and the fear of the terrorist war, Howard won the November 2001 election.

This time it’s Scott Morrison clinging to a straw. He and his colleagues are clearly thinking that if fear and war mongering have won the Coalition elections in the past, it’s worth a go again today