We are called to be ‘Neighbours without Borders’

In his encyclical Fratelli Tutti Francis says that being a neighbour without borders is how Christians are called to respond to the challenges faced by our world.

First there were Doctors without Borders or Médecins Sans Frontières (MSF), those medicos who go where others fear to tread. Then came Engineers without Borders followed by Teachers, Architects, Journalists and even Clowns without Borders! These organisations have a common commitment to reach across national boundaries irrespective of race, religion or political affiliation.

Pope Francis has now added another all-encompassing category, that of ‘Neighbours without Borders’. In his encyclical Fratelli Tutti Francis says that being a neighbour without borders is how Christians are called to respond to the challenges faced by our world – challenges exposed and magnified during the COVID-19 pandemic.

As someone who has pondered and prayed this parable for decades, I find this simple metaphor of being a neighbour without a border both a challenge and a refreshing stimulus for head and heart.

Little wonder that Francis loves this parable, so attuned as it is to his own mode of teaching.  Neither Jesus’ parable nor Francis’ encyclical indulge in abstract moralising about how to respond when one chances upon a person in need. Trusting in the best of the human spirit, both call for a simple human response of love. Love “does not care if a brother or sister in need comes from one place or another. For love shatters the chains that keep us isolated and separate; in their place, it builds bridges.” (#62)

Building bridges, rather than walls is a familiar theme of Francis’ teaching.

Jesus tells the story of the Good Samaritan in answer to the question asked of him: Who is my neighbour? In Jesus’ time, as in ours, a neighbour usually meant someone like us, ‘one of us’. Samaritans were not neighbours of the Jews. “Jesus, himself a Jew, completely transforms this approach. He asks us not to decide who is close enough to be our neighbour, but rather that we ourselves become neighbours to all.” (#80).

This is a transformation, a conversion, from an exclusive “who” to an inclusive “do”. Don’t just stand there and ask who is my neighbour? Go and become a neighbour, just as the Samaritan did with the wounded Judean.

The “encounter of mercy” between a Samaritan and a Jew was highly provocative – akin to a Hutu in Rwanda caring for a Tutsi, or a member of the Taliban tenderly tending an American. The Good Samaritan, says Francis, challenges us to expand our frontiers beyond any form of tribalism. The parable “gives a universal dimension to our call to love, one that transcends all prejudices, all historical and cultural barriers, all petty interests.” (#83)

The Samaritan traveller gave the wounded man on that dangerous Jerusalem to Jericho road one of our most precious commodities – the gift of time. Francis observes that in our frenetic world we cling tightly to time. Yet we become a neighbour, we build bridges and break down walls, by first giving of our time.

Like us, the Samaritan had his own plans for the day, his own needs and priorities. But he saw that the injured stranger was deserving of his time and attention.

Refusing to make time for the person or group that is suffering is symptomatic of an unhealthy society, Francis says.

Each day, Francis says, we are confronted by a stark choice – “we have to decide whether to be Good Samaritans or indifferent bystanders” (#69). There are only two kinds of people: “those who care for someone who is hurting and those who pass by; those who bend down to help and those who look the other way and hurry off”. (#70)

There are many ways that we “pass by”. “We can retreat inwards, ignore others, or be indifferent to their plight”. (#73) I can “pass by” under the guise of noble caring by offering to pray for those in need but doing nothing to alleviate the need. Elsewhere, Francis has said, “You pray for the hungry. Then you feed them. That’s how prayer works.”

I’m reminded of the predictable response in the USA after another mass shooting; leaders offer “thoughts and prayers” but there has been little action on gun control. Hopefully this will change during the term of President-elect Joe Biden, who says he wants to end gun violence with measures such as banning assault weapons and ending the sale of firearms and ammunitions online.

A neighbour without a border is one who answers the age-old question, Am I my brother and sister’s keeper? (cf. #57) with an unqualified, “Yes”.

To be a neighbour without a border requires that the common good trumps individual and sectional interest and indifference.

Don’t we see this starkly played out in the response to restrictions brought about by the COVID-19 pandemic? We – the world that is – cannot beat this virus without a commitment to the common good. Melburnians must take a bow for their commitment to the common good during this year’s extended lockdown, knowing, as they do, that no-one is safe unless everyone is safe.

Conversely, we witness the disastrous consequences when individuals self-servingly flout restrictions. The common good is dangerously absent from those who claim any COVID-19 restriction is an egregious assault on their individual human rights. “I’d rather die than be told to wear a mask,” said one angry protester.

I can be the Good Samaritan that I claim to be by giving my time, being committed to the common good and acting as a neighbour – a neighbour without any border. It occurs to me that Jesus and Pope Francis are calling all of us to be Good Samaritans.

This article has been republished from ‘The Good Oil’ Newsletter November 2020 issue from The Sisters of the Good Samaritan of the Order of St Benedict. 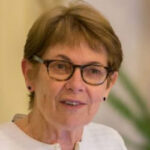