We have seen Morrison’s best, and it wasn’t much 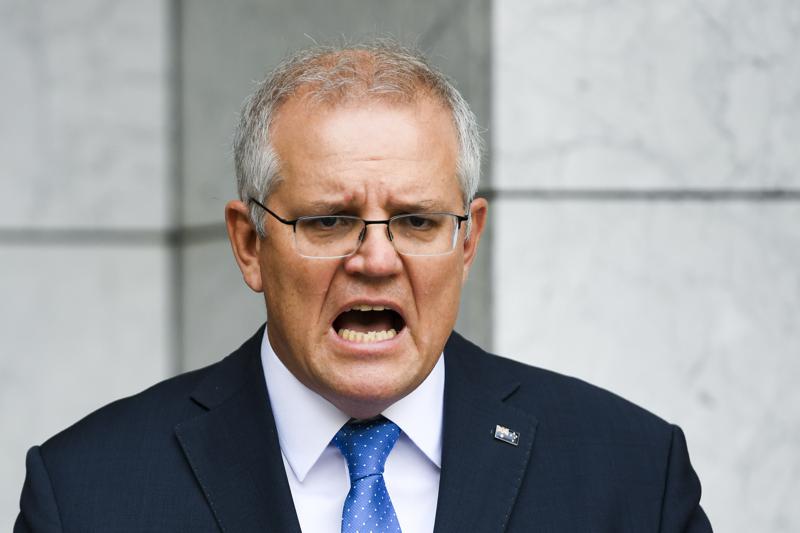 The prime minister Scott Morrison is in a lot of trouble again. He will probably get out of it, with just a few more bruises and scratches, but the clock is running down on his leadership.

His party and the electorate know by now the most they can expect from him. It is not impossible that this ‘most’ could see him leader at the next election, perhaps still prime minister afterwards. But he will grow no further into the role. He has never represented any abiding idea and has no unfinished business. We would hold on to this nurse only for fear of finding something worse.

For quite some time he himself has been the main drag on the government’s fortunes, at a time when the public has been disposed to want him to succeed, or the government, the economy, and the public health to triumph through catastrophe. He has found himself unable to mobilise that good will, and has failed to be the sort of person, or leader, that people have had an instinct to depend upon in a crisis. He won the last election virtually by himself and has never seemed to market confidence in his team.

Before and during the pandemic he has had unlimited access to public resources. He has not scrupled to use them for partisan, often quite improper purposes. He has an enormous capacity to believe that anything in his own interest, or the government’s short-term political interest, is in the public interest, even when it has been in breach of the law, the decencies and undermines long-standing institutions and conventions.

He is a polished professional politician but has been unable either to articulate long-term goals or visions for his country. Or strategies or explanations for the transition between short-term and popular actions and the long-term structure of society, the economy or the national security. It has taken some time for it to become obvious, but he is not very good at organising his team, or the administration behind policy and programs.

His stock of personal idiosyncrasies is not endearing, nor do they enrich or add flavour to his style. No one could, or should, criticise him for not being intellectual or well read. One does not have to be if one wants to get involved in the contest of ideas and ideals. To be in the argument from a settled and disciplined philosophy. In it to persuade and to change behaviour rather than merely re-arrange facts. His supposed talent for marketing has never been about substance or making a real difference.

The cack-hand we are now seeing is the real him. Failing in the big things and in the little things. The big picture and the detail. Failing too to learn from his mistakes, including by frank analysis of the way that his own personality, and his own failings have contributed to, or caused his problems.

Morrison blames others, dodges responsibility, rewrites history and redefines words and actions. These may be characteristics of a healthy ego – a necessity in politics – but work best only when the internal person privately understands the mistakes, and changes behaviour to make sure he does not repeat them. Morrison always gives the impression of believing his own propaganda, whatever it happens to be at the time. In the course of this he has lost any true sense of what actually matters.

Whether with the pandemic and the economy – the biggest things – or with a host of critical tasks – energy policy, climate change, population, defence, and quality and integrity of government, Morrison has seemed in constant struggle. With the facts. Determining the task. Articulating it for the ages, and beyond mere slogans or words like sovereignty.

The marketing man has never been able to completely unite his team, including the Nationals, around enduring ideas, and difficult colleagues and backbenchers have realised that he cannot win an argument, call on loyalty, or demand confidence in his judgment. State premiers and chief ministers – some on his own side of politics – have rejected his instincts. Compromise – the essence of any government – has always underlined his weaknesses more than his strengths.

He hasn’t even had the luck. In recent days, almost every plan, or target or announcement has been in constant revision.

The circumstances have changed in a way he did not anticipate. That is a commonplace in politics, or war, but Morrison has usually made his position more difficult by suggesting that his hopes and aspirations are turned into solid fact. That the doubters are wrong, malicious or absurdly cynical, or even – horrors – playing politics.

Rather than ruefully admit error, he has tried to reinterpret old statements and assertions of operating principle to explain his latest duck and dive. He sometimes seems unable to do anything but stagger from fresh temporary setbacks and the collisions of quick fixes, inconsistencies and failures to understand, explain or establish guiding principles. Morrison may still have the time to throw unlimited sums of public money at each fresh crisis, but he has pretty much squandered his credibility, his authority and his moral credit with voters.

His political allies are in despair, reluctant to resort to the argument that he is the least worst of the leadership choices. Each leadership turmoil of the past decade, in the Liberals, the Nationals, Labor and even the Greens has generally seen that argument prosecuted by the ultimate big loser.

His rivals in his own party, and those in it who look at him without friendship, enthusiasm or shared faith in his self-belief, are content only if he looks the most likely winner of the next election. They would prefer that he fell off a cliff rather than that he was pushed. No one yearns for a restoration of the leadership uncertainties of the past. But some may well judge that his present leadership style has at best, nine months to go, perhaps with catastrophe for the party at the next election. He is too settled in that style to reinvent himself, even with an army of advertising folk.

Could someone do a better job of saving the furniture? Would those with leadership ambitions, on all sides of the Liberal Party spectrum, be better positioned for the long-term while there were things to do, or would they be better reforming the party after a debacle? Is yet another “miracle” possible, with God’s vote making fools, yet again, of commentators, critics, opinion polls and doubters? That vote last time – what he has interpreted as having been divinely anointed for his role – has become another handicap. A man on whom God has lain hands is hardly likely to listen to mere mortals. Even colleagues.

The best thing going for him is that no one yet is sure that Anthony Albanese, or Labor can defeat him. The Labor vote is holding up, slightly ahead, at the polls for what they are worth, it is almost impossible to detect a groundswell for the opposition – even less for its leader.

Morrison and the Liberals have done enough to persuade voters that they deserve to lose. Labor has yet to persuade anyone that it deserves to win. Nor have they invested the mission with the appearance of a crusade for a better Australia. At best, they are describing what the Liberals are doing wrong. It is not enough.