What is Anthony Albanese up to! 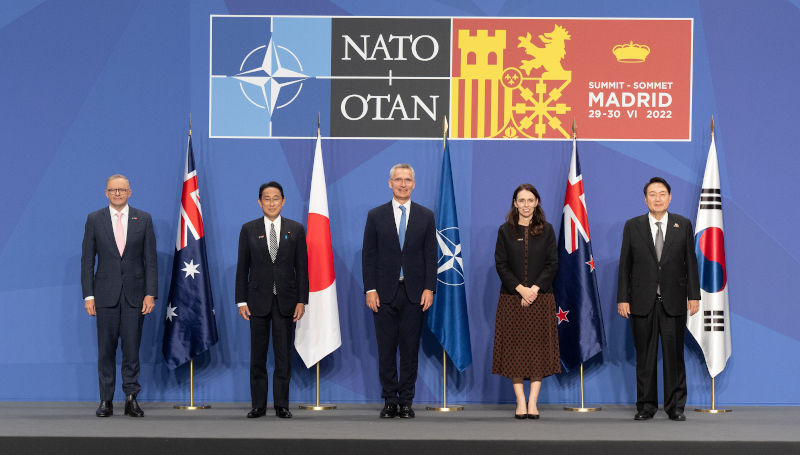 Anthony Albanese has shown during his recent trip to Europe that he is a prime minister addicted to hyperbole and oblivious to how countries can change in unexpected ways.

He told NATO leaders China aimed to become the most powerful nation in the world and its strengthening relations with Moscow “posed a risk to all democratic nations”. It’s most unlikely all democratic countries will be at risk. For a start, Russia will be in no condition to go to war with any other country after its abhorrent decision to invade Ukraine. It could be bogged down for years in a guerrilla war. China faces  a growing number of countries, including those in NATO, which are committed to containing its military and economic growth.

Albanese said in Europe that China is trying to “build up alliances to undermine what has historically been the Western Alliance in places like the Indo Pacific”. Historically, however, most Asian countries, including India and China, have been there a lot longer than the Western intruders are likely to last. The US may be the exceptional state. It annexed Hawaii in 1898 and made it an American state in 1959. But there is a plausible chance America will not  remain a democracy in coming years. While nothing is certain, China may become a democracy sometime after a discredited President Xi is deposed or dies. If so, it is entirely feasible the public may elect a majority Communist government led by a moderate reformist. No one knows. Alternatively, the US may become an autocratic state with a feral Supreme Court while China remains an autocratic state with an unpopular and futile determination to achieve “Zero Covid”.

The story of other members of the Western alliance is one of momentous change. Britain took Hong Kong by force in 1842 as a base for peddling opium produced in India by the British East India Company. India won its independence from Britain in 1947 and Hong Kong was handed back to China in 1977. France had a cumulative 100 years as the colonial power in Indochina until booted out by the Viet Minh in 1953. However, it retained its colonial possessions in the Pacific Islands. Albanese told President Macron in Paris that France was an Indo Pacific power which could help contain China’s “growing ambitions” in the region.

Albanese blasted China for not condemning Russia’s invasion of Ukraine but exempted India which did the  same. Labor’s Defence Minister Richard Marles earlier warmly praised India and said it is “central to Australia’s worldview and defence planning”. It also has a Hindu supremacist government that actively discriminates against Islamic members of the population.

While in Europe, Albanese falsely claimed that Australia always obeys the international rules. If it had, it would not have helped the US and the UK invade Iraq. The invasion killed or seriously injured large numbers of people and rendered even more homeless. It also allowed terrorist groups to operate in Iraq when none were present under Saddam Hussein.  Albanese’s misleading assertion dishonours Labor’s leader at the time, Simon Crean, who opposed the invasion as a breach of the rules forbidding the use of military aggression in international relations.

Albanese caught the attention of his European audience when he complained that China had “economically coerced” Australia. A fuller picture would have acknowledged Australia officially took more than 100 anti-dumping complaints against China, despite usually frowning on such measures as potentially harming free trade. China eventually retaliated with tariffs and anti-dumping measures on some Australian exports to China. Albanese gives no sign that he understands China is not the only one who should back off.

China has not been in major war since 1950. Nor has it  killed anyone in the South China Sea or near Taiwan,  where it is accused of behaving more aggressively. All major countries accept Taiwan is part of China. Some of China’s opponents, including senior US Republican politicians, seem intent on goading it into using military force against Taiwan. Fortunately, Taiwanese leaders seem to understand that the island will not be attacked unless they declare independence. China could make this less likely by granting Taiwan a genuine status as autonomous region. One reason China won’t grant independence is this would make the island a convenient base to stage attacks against the mainland. Nevertheless, an experienced observer Geoff Raby says China won’t attack the island as this would involve the killing fellow ethnic Han Chinese which would be highly unpopular.

China makes claims to territorial waters in the South China Sea that other littoral countries also claim. The Pentagon acknowledges China withdrew six land claims to settle borders disputes. If it wants to be more accommodating, China could settle some of the extreme territorial sea claims that were originally made by the Communist Party’s political opponent, the Nationalist Party, before 1949. Taiwan also makes these claims. Ideally, China Sea could follow the Antarctic example and offer to turn South China Sea into a demilitarised zone beyond the 12 nautical mile offshore line.

There is no dispute that China is building up its armed forces. But its spending is no match for the US which is spends as much as the next nine countries together, including China. China has good reason to respond to a US military build up. In 2009, the US announced it had developed an Air/Sea Battle Plan for a war with China, to destroy much of its air and naval forces and blockade all its ports and maritime routes. The details have changed, but in 2011 the US also adopted  a “pivot” to the Pacific with goal of deploying  60 per cent of its forces there. It is also actively engaged in building new bases on Pacific islands within striking distance of China while the Albanese government loudly opposes any hint that China might try to build naval base in the Pacific, or even in nearby Cambodia. US and Australian forces also constantly undertake surveillance missions close to China.

In these circumstances, it is vital to try to ease tensions on all sides to avoid what would be a terrible war. In the past, Labor would be among those urging support for new arms control agreements and expanding all channels for the potential combatants to talk. Ben Chifley, Bert Evatt, Gough Whitlam, Bill Hayden, Gareth Evans and Paul Keating all made significant efforts to actively promote peace. Anthony Albanese is supporting a large arms buildup, which is not the same thing.

Well before Albanese’s European trip, he stressed the Labor government would support the Coalition’s new security pact between Australia, the UK and the US (AUKUS). No one has given a convincing explanation for why we need AUKUS on top of the Australian New Zealand US (ANZUS) security treaty signed back in 1951.

The UK adds nothing of value. In 1968 the then Labour Prime Minister Harold Wilson announced that Britain would withdraw its military bases from “East of Aden”. This was a good policy reflecting the fact that Britain no longer ruled the waves. Wilson also refused to send British troops to the Vietnam war, partly because the country couldn’t afford it. Yet Britain retained its “special relationship” with the US. A subsequent government restored a military base in the Middle East, but now Boris Johnson, a disastrous prime minister, has given British military forces a role in confronting China in the Asia-Pacific.

Although the text of AUKUS has not been released, it states the US and UK are prepared to sell nuclear submarines to Australia. They would’ve done that without AUKUS. They would also have done so for other countries such as Japan, South Korea, Vietnam and Singapore, but they see more advantages in writing operating modern conventionally powered ones. NATO members without nuclear subs could buy them, but don’t because it doesn’t make military or financial  sense. Yet Labor still wants buy eight nuclear subs, almost certainly from the US, so it can fire cruise missiles from nuclear submarines operating far from Australia into China. This is an extremely bad idea on both strategic and cost grounds.  It will only provoke China which çan fire more missiles into Australia than Australia can fire into it. We could do more to defend Australia from closer to home with a mix of weapons at a much lower cost. Moreover when our nuclear submarine fires the first missile into China it will be detected and almost certainly sunk.

Plausible estimates put the cost of eight US nuclear submarines at $171 billion. (This is from a government that says it can’t afford to increase the miserable level of the New Start Allowance.) The risks of buying nuclear are on the upside, particularly as Australia wants to build them here.

The first submarine, probably a version of the US Virginia class attack ones, will not be operationally available until the early 2040s and the last by 2060. A leading US defence analyst Winslow Wheeler cautions that the Virginia class has maintenance problems and is not available for much of the time. He says that over 33 years they have only  performed 15 six monthly deployments.

The former Senator Rex Patrick, an ex-submariner, says that conventionally powered submarines are now commonly equipped with air independent propulsion (AIP), which makes them quieter than nuclear submarines which have to keep their reactor cooling pumps going and use noisy big meshing gears between the steam turbines and propellers. Others point out that nuclear subs can be detected by their constant release of hot water; by leaving wakes on the surface when run at high speeds and by blue green lasers that will penetrate water by 2040.

Patrick says that figures given to the parliament show Australia could buy 20 modern off-the-shelf conventional submarines for $30 billion – not $171 billion for nuclear submarines that don’t meet our requirements.

Another downside of buying nuclear subs is that we would have to meet our obligations to declare any fissile material under our control to the International Atomic Energy Agency which acts on behalf of the Nuclear non-Proliferation Treaty (NPT). However, the US will refuse to give us the required information about the highly enriched,  weapons grade uranium in the reactors.

A further problem is that several Pacific Island leaders don’t want Australia to buy nuclear submarines. Nor, as Foreign Minister Penny Wong discovered on her recent visit to Malaysia, do its leaders.

Australian public opinion does not unambiguously support Labor’s strategy. The latest Lowy Institute’s annual poll shows over 51 per cent believe Australia should remain neutral in a military conflict between China and the US.

Even the hawkish former defence Minister Peter Dutton told National Press Club that he did not believe China wanted to occupy Australia. Why then do both sides of politics go out of their way to make an enemy of China. It is a recklessly provocative policy that could cause many Australians to die unnecessarily.