Five years in the making, the Final Report of the Medicare Benefits Schedule (MBS) Review Task Force was quietly released last week. Associate Professor Lesley Russell outlines the wide-ranging findings and how they are likely to shape the future of the MBS.

If you missed the Morrison Government’s release of the final report from the Medicare Benefit Schedule (MBS) Review Task Force (along with a number of other reports from the review that the government had been sitting on), then I suspect that is what Health Minister Greg Hunt had in mind.

And if there were any doubts that there would be no immediate action on the Task Force’s recommendations, Minister Hunt put those to rest by saying, “This is a report to government and not of government, and we will now consider, consult and respond as we have done throughout the course of the review in relation to all previous proposals.”

In its five years, the Review has issued some 60 reports and made more than 1,400 recommendations for changes to the MBS. This has involved more than 100 clinical committees and working groups, which engaged with more than 700 clinicians, health sector experts and consumer representatives.

All the reports, findings and resources from the Review are available here.

To date, the Government has implemented 520 recommendations. There are currently more than 5,700 items on the MBS; I understand that in effect only 200 have been changed.

The Task Force has faced a challenging task and its work has proceeded at a snail’s pace as it struggled to get stakeholders to agree on changes. Too often financial considerations have been allowed to over-ride the evidence for change. Even after recommendations were released, the consultation and lobbying continued. There are numerous examples where the Minister has given in to pressure and ignored or watered down the expert advice.

The articles that I and others have written for Croakey on the MBS Review are available here.

This provides a summary of the work of the Task Force and makes 21 broader recommendations that are described as necessary to reform and to reposition the MBS to meet the challenges ahead. In many cases these recommendations address issues that were outside the terms of reference provided for the Review.

The recommendations centre on:

The focus on meeting consumer needs is encouraging. But while there was genuine consumer involvement in the Review, much of this fell away when it came time for the argy-bargy over implementation. Then the loudest, most powerful voices (ie, the clinical professions) were the ones the Minister heard and noted.

It is a problem that most people in the community have little or no idea of the work of the MBS Review and there is no effective mechanism for ensuring this happens; for example, that patients are aware that recommendations have been made about the ineffectiveness of spinal fusion for uncomplicated axial chronic lower back pain and consequent deletion of the Medicare rebate for this procedure.

The Task Force’s recommendations for improved measurements of healthcare outcomes and satisfactions will also require consumers/patients to be educated about and understand the growing focus on high value care and the push to reduce low value care – a task complicated by the fact that what is low value for one person may not be for another.

While both Choosing Wisely and NPS MedicineWise work in this space, I would argue their reach is not sufficient to ensure public awareness at the levels needed to improve patient and carer decision-making.

It is encouraging that the Review recognises the problems of growing out-of-pocket costs. The final report makes several recommendations to tackle these, including the establishment of an independent Medical Fee Complaints Tribunal. However, the recommendations all focus on consumers being able to recognise and respond to unwarranted or egregious charges and do nothing to prevent them in the first place or to ensure that offending clinicians are censured.

The Task Force’s recommendations about alternative funding models are worthy of consideration. They are modest and complementary to fee-for-service (FFS) (which should help offset the inevitable outrage from those who cling to FFS as the “gold standard”): basically what is proposed is a blended funding model that includes fee-for service, case-based, bundled and/or capitation payments.

The report rightly notes that there is a need to balance viable business models for clinicians with payment mechanisms that better meet the requirements of patients with complex needs, where multiple interventions are needed, or where team-based care is required. These financing changes are proposed not just for primary care but for areas of speciality care such as cancer and ophthalmology.

The Task Force also suggests that where FFS is retained, rebate relativities should be introduced to ensure that the benefits payable reflect contemporary evidence and health technologies. As the report sagely notes: “Adjusting the fees associated with existing MBS items is a contentious issue” – a serious understatement of the reality.

The last time this was tried, a joint Department of Health and AMA “Relative Value Study” took six years (1994-2000) to conduct and then was not implemented because the stakeholders disagreed on rebate adjustments. (You can read a review of this effort by Dr Michael Wright here.)

Linked into these payment reforms – and the goals of improving continuity of care, especially for patients with chronic and complex conditions – is the recommendation for implementation of the Voluntary Patient Enrolment initiative announced in the 2019-20 Budget but never introduced.  The Department of Health website says this was because the pandemic intervened and states, “The Government is actively working with health and system experts, including the Primary Health Care Reform Steering Group, on a revised patient enrolment model as part of the 10 Year Primary Care Plan. The 10 Year Plan is expected to be delivered in time for Budget 2021-22.”

The Task Force acknowledges the lack of defined pathways to leverage research findings and innovation in healthcare services and calls for the establishment of a specific, high level, body (an National Institute for Health Research) to do this, along with more funding for health services research.

It also points to the need for a national infrastructure to support and prioritise controlled trials of health policy initiatives (as currently occurs for clinical trials). It’s interesting that the Task Force does not seem to see a role for he proposed National Institute for Health Research in this work.

A slightly different approach might be to adopt a model closer to that of the Center for Innovation at the Centers for Medicare and Medicaid Services (established under Obamacare) which dovetails finance and delivery reform efforts with evaluation to build theory and strengthen practice. Every service delivery or payment model developed, funded and piloted includes a plan of action to ensure that the best practices identified can be spread widely and rapidly. (The Labor Party took a similar proposal to the 2019 election but now seems to have dropped it.)

The future of reform

Finally, the question left hanging is “What happens now?” The work of the MBS Review is far from complete, in many areas has barely begun, and it will continue to be needed into the future.

The Task Force recommends a continuous oversight mechanism for the MBS. With annual costs expected to exceed $30 billion from 2022–23, this should be considered a non-negotiable, top priority. It proposes a new entity — a Medicare Advisory Committee — to bring together both the current role of the Medical Services Advisory Committee in examining and listing new items and the role of a continuous review mechanism in reviewing, updating and removing existing items, along with providing advice to the Minister on related issues as required.

Those who are committed to MBS reforms to ensure it is fit for purpose for the third decade of the 21st century and beyond should push hard to ensure that the funding and commitment for needed legislation are in the May 2021 Budget.

At the same time, there should be an open inquiry and discussion around which recommendations from the Review have not been implemented and why.

A note on additional reports from the MBS Review Task Force:

1. Final Report from the Consumer Panel

The report is available here.

The Consumer Panel found that there was genuine consumer involvement and partnership in the Review and that this was “positive, effective, and influenced outcomes both on an individual clinical committee level, and for the Taskforce overall”.

The way the Consumer Panel worked here provides a valuable model for consumer engagement in other areas of public policy, especially those where the key question is “How and what benefit does this deliver to consumers and the community?”

This report outlines detailed recommendations in relation to principles, practice, priorities and partnerships to progress such consumer-centred reviews.

The response from the Consumers Health Forum to the release of the Final Report is here. 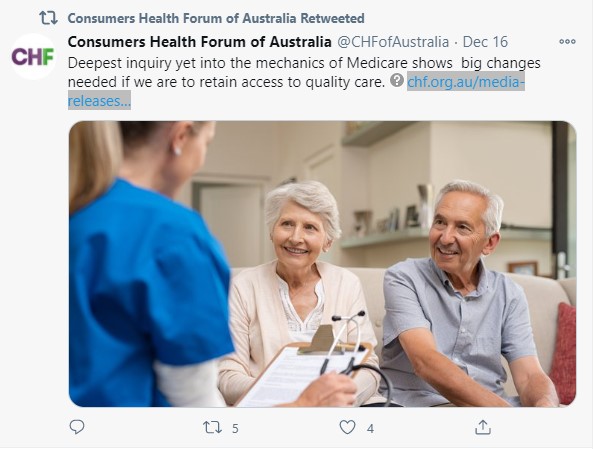 The General Practice Primary Care Clinical Committee (GPPCCC) and Primary Care Reference Groups (PCRGs) both submitted their Final Reports to the Task Force in August 2019. You can access interim and final reports from the GPPCCC and the PCRGs here.

I wrote about the preliminary findings from these working groups for Pearls and Irritations back in January 2019. I was optimistic then that there were important changes on the way.

The Nurse Practitioner Reference Group report made 14 recommendations for change. However, none of these recommendations was included in the final Primary Care Report. The issues are outlined well in an article from Professor Mary Chiarella and Associate Professor Jane Currie in Pearls and Irritations. They describe this as a “perverse, offensive and oppressive rejection of the diligent and evidence-based work of a specifically commissioned reference group”.

It’s hard to know what happened here and why; is it the result of what has been called a very doctor-focused approach to primary care? An off-the-record conversation I had with someone very prominent in the Task Force indicated that there were disagreements among nurse practitioner (NP) groups, I think over scope of practice. But others in the nursing/nurse practitioner community deny this.

Whatever is going on, it is not good for patients. The value of NPs has been demonstrated over and over again and they often are key providers of services in difficult, challenging and unpopular clinical settings. Let’s hope there are avenues available for change.