While we can ‘celebrate small victories’ Catholic women deserve much more

When women question the status quo with openness, frankness and boldness, they are ignored or figuratively told to go away by male gatekeepers.

I didn’t know whether to laugh or cry, to be grateful or give vent to my frustration. This was my honest, mixed reaction to the news that Pope Francis had changed Canon 230 of Canon Law; “Lay people” could now be admitted to ministries of lector (reader) and acolyte (altar server), whereas previously the canon was restricted to “lay men”.

In the wake of Francis’ announcement, I experienced the range of emotions expressed by other Catholic women.

Like me, some women were somewhat bemused, others surprised, not realising that previously women weren’t allowed to fill these roles.

I believe that these women must have been fortunate to have clergy who had “allowed” them to read and to serve in the sanctuary, not only as cleaners or flower arrangers!

Was this really a giant step for Catholic womankind? “Is it really progress to concede to women functions which they have carried out for decades, even during Masses in St Peter’s, a recognition that no women’s organisation ever asked for?” asked Veteran Catholic journalist Lucetta Scaraffia.

Others were underwhelmed. Former Irish President, Mary McAleese, in typical feisty style, said that the new law was “the polar opposite of earth-shattering … It is minimal but welcome all the same, for it is at last an acknowledgement that it was wrong of Pope Paul VI to ban women from the stable lay roles of lector and acolyte which remarkably he did after the Second Vatican Council.” Needless to say, Pope Francis did not go there!

Other responses, such as that of UISG, the International Union of Superiors General of which I am a member, were affirming: “Thank you, Holy Father,” and delicately diplomatic, subtly choosing to emphasise that women share in the life and mission of Christ, through baptism, rather than by ordination.

British theologian, Tina Beattie, also took a nuanced approach. “This latest development may fall short of affirming the full sacramental dignity of women made in the image of God, but it can be embraced with integrity and affirmed as a genuinely welcome doctrinal development,” she said.

Why does the story of the Canaanite woman in Matthew’s Gospel (Matthew 15:21-28) come to mind? She is that gutsy foreigner who calls out to Jesus to cure her daughter. Jesus’ initial response is to ignore her and remain silent while the embarrassed gatekeeper disciples suggest she be sent away. Not only is she a woman who doesn’t know her place, but she is also ‘other’, a foreigner from the other side of Israel’s border.

The woman’s courageous persistence challenges Jesus’ own understanding of his ministry and who is included and who is not. She broadens his perspective that perhaps she and her daughter can share the same bread with Jesus and his disciples. She would be satisfied to be like the dogs who get to eat the crumbs!

It occurs to me that Pope Francis has given women some “crumbs” by allowing them to be lectors and acolytes.

Like the Canaanite woman I am prepared to be grateful and to “celebrate small victories”. However, women deserve – our Church deserves – so much more.

Despite Pope Francis’ oft-repeated encouragement for all disciples to speak with frankness, boldness and courage, women continue to be silent and silenced within the Church. Women may now be able to read the Word, but they are forbidden to “break open the Word”; they are forbidden to preach in church.

Are you tired of hearing only men speak when we celebrate Eucharist? I am. Are you bored during Sunday worship listening solely to the male experience, male interpretations of the Scriptures, and nothing but male imagery for the Divine? I am.

By exclusively prioritising the male, the Church breathes with but one lung.

Opportunities for women to speak of their faith experience and share their biblical interpretations are limited. When women question the status quo with openness, frankness and boldness, like the Canaanite woman, they are ignored or figuratively told to go away by male gatekeepers on every rung on the hierarchical ladder.

But I am grateful for some fallen crumbs. Hundreds of people have been tuning in to Garratt Publishing’s Virtual Lent Series where four Australian biblical scholars at Yarra Theological Union explore the lectionary readings for the following Sunday. I, and others I have spoken to, have particularly appreciated the input from the two female scholars, Sisters Mary Reaburn NDS and Mary Coloe PBVM.

Then there is the initiative from The Grail and Women and the Australian Church (WATAC), a new podcast series called Australian Women Preach. The podcast was launched on International Women’s Day and features women breaking open the Word of God as they preach on the following Sunday’s Gospel. I have been asked to preach on the Gospel for Easter Sunday.

The sky will not fall in when women preach.

Can the Church be like Jesus, and allow the exclusive status quo of who is in and who is out to be challenged, and change perspective and practice in response to that challenge? I look to the Canaanite woman and live in hope!

This article was first published in the March 2021 edition of The Good Oil, the e-journal of the Sisters of the Good Samaritan. Republished with permission. 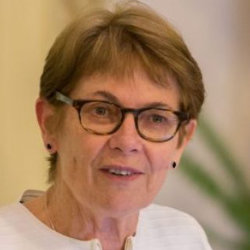