Why Australia must steer clear of America’s moral crusade against China (SCMP 28.10.20)

America’s global standing is in decline, on the back of its single-minded pursuit of military might and consistent flouting of the rules-based order it helped create. Anti-China enthusiasts in Australia also need to view China’s record in a historical context.

There is excessive anti-China rhetoric currently in Australia and possibly insufficient realism about the mixed legacy of the United States or the dangerous situation in which current US anti-China policy places Australia. As Peter Hartcher, international editor for The Sydney Morning Herald, wrote recently: “The American ‘beacon on the hill’ is growing dim. Australia needs to light its own way.”

In 1945, Franklin Roosevelt’s America led the world in establishing the institutions that constitute what we know as the “rules-based order”. The first principle of the new order was respect for the sovereignty of individual nations.

The post-war period was supposed to be the dawn of a new age, led by a generous and prosperous America. The global leadership of the United States was unrivalled and paramount. The UN Charter was clear. Unilateral resort to war and armed intervention in sovereign countries were replaced by collective decision-making in the Security Council on behalf of all member states.

But within a few years of those heady days, the US took a different turn. It made a fateful choice to pursue global military supremacy – regardless of the limitations imposed by the rules-based order – and to sustain it long into the future.

Whether justified or not by the Cold War, the policy has now outlived its usefulness. America now deploys troops in more than 170 countries; its budget for defence and national security exceeds US$1 trillion; it spends more on defence than the next nine countries combined; it has approximately 800 overseas military bases and installations.
Successive presidents from Harry Truman onwards saw armed dominance as the only way the US could relate to the world, while paying lip service to the rules-based order – and conveniently ignoring it whenever the US deemed it necessary for its interests.

Hence the long list of interventions, wars and covert intercessions in the affairs of other sovereign nations. It started with the brazen interference in the Italian general elections of 1948, which makes anything done by Russia in the 2016 presidential election look half-hearted. The list goes on and includes Iran, Guatemala, Vietnam, Chile and many others, culminating most recently in the military invasions of Iraq and Afghanistan.

The US is no longer generous and prosperous and has long since ceased to adhere to the rules. Thirty years before the South China Sea arbitration, Washington reacted to an unfavourable decision of the International Court of Justice in favour of Nicaragua by refusing to recognise the judgment and attempting to block its enforcement.

And when the court ruled in favour of a group of Mexican foreign nationals on death row, it withdrew from the protocol giving the court jurisdiction. A law professor quoted by The New York Times described it as a “sore-loser kind of move. If we can’t win, we’re not going to play”.

Washington reacted in the same way to a recent judgment obtained by Iran. And it has behaved similarly towards other collective organisations of the rules-based order, including the World Trade Organization, which it has sought to undermine by refusing to appoint appellate judges. In the dark words of US economist Jeffrey Sachs, the “United States is completing the move from post-war leader to 21st century rogue state”.

China has become the world’s largest creditor nation – and the only major power that has not gone to war in 40 years. Nor does China support proxy wars. In contrast, the US has been continuously at war in the same period. In the last year of Barack Obama’s presidency alone, the US dropped 26,000 bombs on seven countries.

Some anti-China enthusiasts seem to have a short memory. We may not like China’s bullying but it should not be forgotten that Britain was a bully in the 19th century and the US was a bully at the turn of the century and in the post-World-War-II era. And both supported their bullying with gunboats, troops and military interventions in sovereign countries, all of which modern China eschews.

Similarly, China’s treatment of Uygurs, Tibetans and Hongkongers may not conform to Western standards but these are complex internal issues within China. They have a long history and a unique context. Xinjiang and Tibet have been part of China since the Qing dynasty in the 18th century. And Hong Kong was occupied by British drug traders supported by the East India Company in 1839 and formally ceded to Britain in 1841.

George Kennan, the American intellectual architect of containment, once famously wrote about the dangers of morality and foreign policy. We should exercise restraint in condemning China in relation to its internal affairs, just as we exercise restraint in condemning the US for its systemic racism, its rampant inequality and its excessive gun violence.

Whatever one’s views of the ruthlessness of the Chinese Communist Party, China’s government has lifted many hundreds of millions of people out of poverty as part of the largest increase in human material welfare in history. And China contributes more to United Nations peacekeeping and counterterrorism than any other nation.
The greatest worry is that America’s “war” against China is being driven by a moral imperative, and that Australia is seen by Beijing to be uncritically allied to Washington’s moral crusade.

It should not be overlooked that the two most important members of the Trump administration, Secretary of State Mike Pompeo and Vice-President Mike Pence, are – as Jeffrey Sachs and others have pointed out – biblical literalists who believe that America’s task is to “fight God’s battles until the Rapture, when Christ’s born-again followers will be swept to Heaven at the Last Judgment”.

Australia – like other prudent countries in Asia – should keep its distance from Washington and demonstrate its own independence of national character. 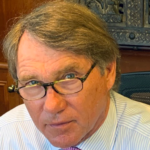 Michael Pembroke’s latest book is PLAY BY THE RULES - The Short Story of America’s Leadership: From Hiroshima to COVID-19 (Hardie Grant, August 2020)