As early as next week, Israel proposes to forcibly annex up to a third of the Palestinian West Bank, with Prime Minister Benjamin Netanyahu calling it “another glorious chapter in the history of Zionism”.

It has been deplored as a grave violation of international law by the UK’s Tory Prime Minister, most of Europe and the developing world, over 250 leading international lawyers, and an unprecedented 50 independent UN experts, and by 1000 European parliamentarians. Europe is considering sanctions.

Australia’s position could not be more out of step with world opinion, as one of only two countries (with the Marshall Islands) to oppose a UN resolution this week condemning annexation. Just as extreme, Australia voted against resolutions recognising Palestinian self-determination and the illegality of the Israeli settlements.

The Australian government rightly promotes a “rules-based international order”. The Foreign Affairs Minister’s recent speech affirms Australia’s commitment to multilateral rules that “preserve peace and curb excessive use of power” and promote human rights and the rule of law.

All of this must mean speaking truth to our friends as to our adversaries – and not being Israel’s unprincipled stooge. The Morrison government must now unequivocally condemn annexation as an illegal threat to international security and human rights and prepare to impose hard-hitting sanctions.

Annexation is indisputably contrary to international law. First, since the United Nations Charter of 1945, it is illegal to use force to acquire sovereignty over foreign territory. This is the case even if a territory, such as the West Bank, was occupied in a war of self-defence (against Jordan in 1967), its precise borders are unsettled, or Palestinian statehood is disputed. The UN Security Council condemned Israel’s annexation of Jerusalem in 1980 and declared it “null and void”.

Annexation is a reversion to the pre-1945 law of the jungle, where violence not law prevails, and people everywhere are fair game to predatory neighbours. Ancient land claims, perceived security needs or economic interests can no longer be pursued by violence. Israel’s move would be little different from Russia’s illegal seizure of Ukraine’s Crimea, in response to which Australia imposed sanctions. It would be worse than China’s militarisation of uninhabited rocks in the South China Sea, since 2.7 million Palestinians actually live in the West Bank.

Secondly, Israel has a duty to peacefully settle its dispute with the Palestinians by negotiations, not force. This is recognised in the UN Charter, Security Council and General Assembly resolutions, and the Oslo Accords. Any changes to the 1967 borders – such as land swaps – must be agreed.

As the late UN secretary-general Kofi Annan observed, by recognising Israel, the Palestinians relinquished their claim to 78 per cent of the historic mandate territory of Palestine. Yet Israel still proposed to annex about 10 per cent of the West Bank at the Camp David talks in 2000, which was plainly unacceptable. The current plan would unilaterally seize up to 30 per cent.

Thirdly, annexation would violate the Palestinian right of self-determination, including the right to govern themselves in their own territory and not to have their political future forcibly decided for them, without a vote, by a foreign government.

Fourthly, annexation would violate Israel’s duties as occupying power under international humanitarian law. Israel must not normally modify existing local laws and legal institutions in the West Bank. It is forbidden from establishing the settlements that now house 600,000 Israelis, which are the object of annexation. The settlements are also a war crime and the International Court of Justice described them as “tantamount to annexation”. Occupation must also be temporary pending the return of Palestine to its legitimate authorities.

Finally, annexation likely amounts to the crime of aggression under customary international law and before the International Criminal Court. Senior Israeli leaders could be prosecuted in foreign courts or the ICC. The ICC has jurisdiction because Palestine is a member state (although this is being challenged) and aggression would be against its territory. The Security Council could also refer the case to the court.

Annexation has legal consequences for all countries. The laws against force and on self-determination are the most fundamental international rules. As such, the International Court of Justice has indicated that all countries must cooperate to end annexation, not recognise it, and not aid or assist to maintain it. All countries must also “ensure respect” for humanitarian law by other countries under the Geneva Conventions of 1949.

Australia should warn Israel that it will impose sanctions if annexation proceeds. Sanctions targeted at the Israeli government and its leaders are appropriate, rather than blanket sanctions (as in Iraq in the 1990s) which indiscriminately harm civilians, such as on private businesses or tourism. Like sanctions on Russia, these should include financial sanctions on Israeli state banks and Israeli leaders, travel bans on Israeli leaders, and an arms embargo.

All transactions involving Israeli companies anywhere in the West Bank must also be prohibited, unless they predominantly benefit Palestinians. Australia could also ban its citizens from serving in the Israeli military in the annexed areas. If Israel is not responsive, further sanctions could include expelling Israeli diplomats and recalling Australian diplomats, and suspending police and intelligence co-operation.

The Russian sanctions also target the state-backed Russian oil industry. Industries important to Israel include the diamond trade (worth over 20 per cent of exports) and high technology. These are, however, more private than state industries so should be spared. European countries are exploring whether to sanction Israeli universities, but this would mostly harm individuals, not the government.

Australians may, however, personally choose to exercise their consumer power to boycott Israeli products. This month the 47-member state European Court of Human Rights declared that “Boycott, Divestment and Sanctions” is not discrimination against Israelis and that banning it violates freedom of political expression.

Annexation would be a violent, predatory, lawless act. It would compound the illegitimacy of Israel’s half-century occupation of Palestine and its insatiable colonial settlements – themselves deserving sanctions. It is not democratic, since millions of Palestinians cannot vote in Israeli elections. Far from creating peace, it would doom Israelis and Palestinians to a future of ceaseless violence, and further impoverish Palestinian civilians.

Australia needs to stand up for the rules it says it believes in – not only against China or Russia, but also against “friends” such as Israel and the US.

This article is re published with the agreement of the author.

Australia, alongside with the Marshall Islands, voted no on the resolution on Palestinian self-determination by the United Nations Human Rights Commission(UNHRC ) passed on 22 June 2020 with 43:2 votes with two abstentions. What company we keep! 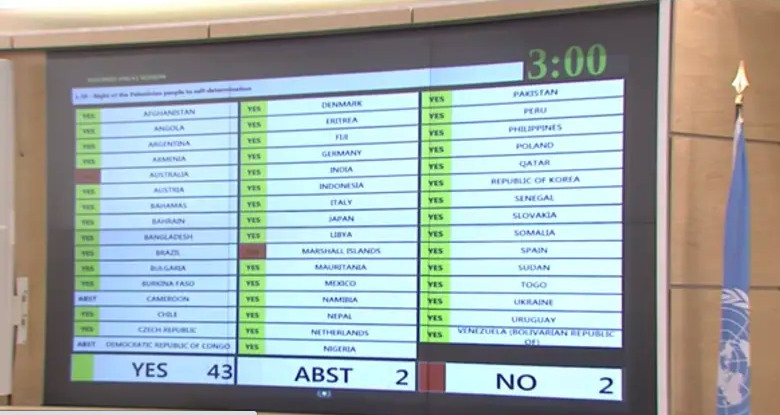 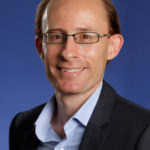 Ben Saul is Challis Chair of International Law at the University of Sydney and the past Whitlam & Fraser Chair of Australian Studies at Harvard University. He has been involved in technical activities with the Israeli Defence Forces and in Palestine.