Will central Lismore be abandoned after yet another flood. 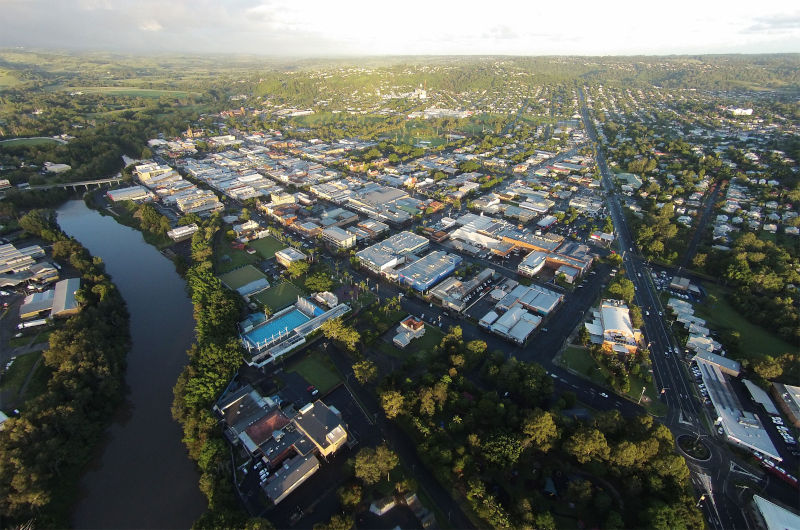 After a big flood in 1974, it was proposed that the Lismore CBD be relocated to Goonellabah. Image: Wikimedia Commons

Now that the floodwaters have hopefully gone and communities are focusing on recovery, the question of ‘relocation’ has become central in discussions about the future.

Should people rebuild their damaged houses in situ, and if so how can they “build them back better”? Or should they relocate their dwellings to higher ground – or build anew off the floodplain?

And the really big question: should we be considering relocating whole Central Business Districts and large numbers of houses out of the reach of floods so as to end the repetitive, costly inundation?

Whole Australian towns have been moved from flood-liable locations in the past. During the nineteenth and early twentieth centuries several were relocated, holus-bolus, from their original riverside sites. Gundagai, on the Murrumbidgee, suffered a huge flood in 1852 and a third of the 250 people there at the time drowned. In response the fledgling town was relocated onto a higher terrace and largely out of reach of floods. Before long Moama, on the Murray River opposite Echuca, was also relocated as was Bega from its original site at the confluence of the Bega and Brogo rivers. Other small towns were partially re-sited to higher sites.

In Queensland, the buildings of Clermont ─ houses, shops and pub ─ were relocated after a flood in 1916 killed 65 of its people. Grantham, a town of a few hundred people on a tributary of the Brisbane River, was largely moved to high ground on the side of the Lockyer valley after the devastating 2011 flood killed several people and destroyed a number of houses and commercial premises. A substantial council initiative saw about two thirds of the population swap their flood-prone properties for land above flood reach.

Could this happen for larger centres? Could Lismore’s CBD, situated next to the Wilsons River, be moved along with hundreds of nearby houses?

It must be unlikely. Past relocations were all of much smaller towns and, Grantham excepted, they occurred many decades ago. Gundagai in the early 1850s was little more than a tent and shanty town, and the volumes of fixed investment were small there as in the other places that were moved. The roads were mere tracks, there were no power, telephone or gas lines or sewerage reticulation facilities, and the simple habitations could easily be dismantled, moved and reassembled. The monetary value of property and infrastructure in these towns was small by comparison with the inconvenience and danger brought by flooding.

Nevertheless moving substantial towns in their entirety after disastrous floods has continued to be canvassed from time to time. The Council of the City of Maitland, after the great flood of 1955 (and following a series of big floods that had invaded parts of the CBD over the previous few years), produced a plan to relocate the commercial core and hundreds of dwellings to high ground at East Maitland, two miles distant. But the merchants of High St, knowing that the community was accustomed to patronising their businesses in the well-established CBD location and not wishing to establish a new centre, were unenthusiastic.

So was the state government, concerned about setting a precedent. The price tag to move Maitland might have been half a billion dollars in today’s terms to move the dwellings of more than 5000 people and scores of shops and other businesses. The debate never really got to a consideration of compulsion as a strategy.

More than 250 dwellings were moved, though, either bodily on trucks or dismantled and re-erected on nearby hills. Many were shifted by the local Lions Club, at little cost to residents: relief money was gathered by what today would be called a crowd funding appeal which brought in donations from far afield, and a new suburb was established on former farmland.

The residential population of ‘old’ Maitland declined and continued to do so for decades: to this day the area remains pockmarked with vacant lots where house once stood. Today its population is less than two thirds of what it was before the flood. The commercial viability of the CBD was impaired as a consequence of the decline.

At Lismore, after a big flood in 1974, it was proposed that the CBD be relocated to Goonellabah, and the council set an example by moving its offices there. But little else happened. Later, the suggestion that Nyngan (population 2500) be relocated, almost all of it having been inundated in 1990, failed to take hold. In Maitland, Lismore and Nyngan, faith was placed instead on levees either new or improved on what had existed beforehand. North Wagga Wagga, a dormitory suburb famed for adopting the slogan “We shall not be moved” in the face of pressure to relocate, did likewise.

These places had too much investment in fixed infrastructure (not to mention emotional investment by residents) for wholesale relocation to be seriously considered. Individual householders can, of course, be encouraged to move. Indeed this encouragement has been provided for many years in New South Wales: a voluntary purchase scheme exists whereby homeowners can be paid market prices for their dwellings which are then demolished. Many homeowners in flood-prone towns and suburbs have taken advantage of the scheme over the past few decades.

The likelihood is that many of the more than 1000 householders in North and South Lismore and within the CBD will accept a voluntary purchase offer. But many will resist it, which means that complete depopulation of flood-prone residential areas will not be achieved. Compulsion is unlikely to be applied, which differs from the situations that apply when major roads in Sydney require land for their construction or when storage dams are built.

The problem of the flooding of Lismore’s residential areas will be reduced by voluntary purchases, but it will not be eliminated. Communities are rarely relocated in their entirety because of flooding.

Lismore’s CBD has suffered grievously from its recent record flood, an extreme one by any measure. It will suffer economic loss as the adjacent residential population declines, but it will not be deserted. Some businesses will not reopen after the recent flood, and others will suffer the loss of trade and in due course will disappear. The experience of commercial decline will be painful.

So what would be needed for wholesale relocation to be seriously entertained? Several very large floods in quick succession, with massive damage? Climate change, almost certainly a factor in flooding nowadays and likely to worsen the flood problem, could push the argument to some sort of fruition in the future. But such a future is decades ahead.

In the short term, as houses disappear from ‘old’ Lismore, the CBD will be weakened and could lose some of its position in the hierarchy of centres in its region. It is hard to say whether the long term will be different.