Will the Dreyfus-Dutton NACC blow up in Labor’s face? 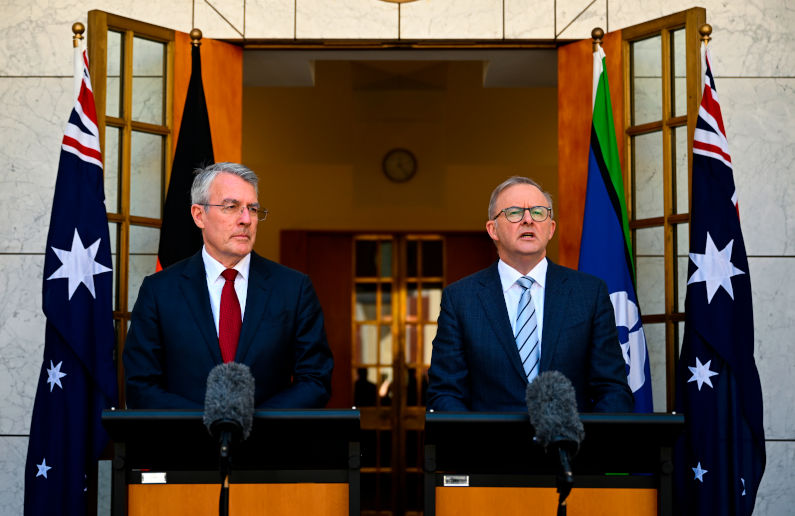 Attorney-General Mark Dreyfus knows he has deliberately put in place a weaker commission than he and Albanese promised at the election. His dirty deal serves Labor’s long-term interests. An ongoing activist commission might prove over-powerful, out of control, and a problem for a Labor administration.

To the Attorney-General, Mark Dreyfus it might seem such an act of hypocrisy, breath-taking cynicism, bastardry and betrayal that it almost ought to be disallowed as a parliamentary or political tactic. To an opposition finally settling down to its role, it might seem but a simple application of Rope-a-Dope.

We are, suppose, a year ahead in Australian parliamentary politics. The new National anti-Corruption Commission has already had three inquiries, all private, whose published reports have excoriated half-a-dozen former Morrison government ministers, including Morrison himself. All but one of these have been forced out of politics, never again to be trusted with the reins of power. The reports have been model investigations. Each has focused on different aspects of maladministration and malfeasance by the ministers, ministerial advisers and senior public servants in the Morrison government. One has involved arbitrary payments to mates, cronies and party donors during the pandemic, the worse for secretive and misleading documentation and clear breach of government financial accountability legislation. Another involves systematic and conscious corruption of appointments to quasi-judicial posts. The third has involved the systematic rorting, for purely political purposes, of various grants programs, used particularly by the National Party as unaccountable war chests to reward their friends and punish their enemies.

Dreyfus is content. He can imagine further NACC inquiries into opposition misbehaviour stretching all the way to 2028. Individually and severally reminding the public of how thoroughly the Morrison administration was unfit to govern. How it continually served private interests rather than the public interest. Of how ministers and public servants consciously violated the law, including the FOI Act, so as to prevent any public understanding of what was going on, or legal, social or economic responsibility for bad outcomes. How they had suborned independent agencies of government, including the police, to be beyond any external control other than triennial elections. How some ministers lined their own pockets, and how others, after losing their seats, rushed straight to jobs offered by just the people with whom they had been dealing as ministers, acting for them as lobbyists or people with insider knowledge.

But suddenly his NACC develops a mind of its own. It closes the books on the Morrison government and decides to focus on current cases of corruption. What’s more, the opposition, which had strongly resisted a commission, and open hearings, suddenly develops enthusiasm for such investigations. Indeed it demands the very thing it had made the price of its acquiescence: open hearings with all the dirty laundry put out to dry.

Parties themselves to be safe from corruption investigations.

If something like this happens, do not be too surprised. NACC would simply be following the pattern of anti-corruption machinery set up earlier in the states and territories. NACC would be showing it is not a political instrument of the government of the day, but an actually independent body setting its own agenda on the prevention and punishment of corruption. It would judge it had made its point about entrenched misbehaviour by the Morrison government. Now to show that it was even-handed.

Most voters have seen just the same events played out regularly in anti-corruption inquiries at state and territory government level over the past 30 years. These had shown that there were rich pickings in any administration, but more headlines from current cases. No party was beyond criticism. There were always politicians with a larcenous eye. There were others with no sense of the proprieties about the use of public money, or legal power, for private gain.

Party organisations had become enmeshed with vested interests, particularly in industries based on media, gambling, alcohol, tax avoidance and organised crime. A revolving door saw party officials and former politicians move freely between party and party paymasters, helping to corrupt and manipulate party decision-making processes to serve the dubious interests of their patrons. These organisations often had power over party pre-selections and could stand-over members of parliament, even ministers. Not surprisingly, mainstream parties agree to rule out NACC jurisdiction over any of this sort of political corruption or misbehaviour.

What voters had learnt from inquiries into state or territory-level corruption was that many incoming governments came into office with public virtue in their minds. They had seen governments which had been responsible for outrageous rorts, and the plain abuse of power in relation to matters such as licenses, land use, the arrangement of contracts, nepotism and favouritism, the abuses of privatisation, contracting out and private-public partnerships. They wanted matters cleaned up and abuses stopped.

But after a while, parties became complacent in power, increasingly inclined, as one critic put it, to think that they held power on freehold rather than leasehold. More venal ministers and mates would begin processes of cutting up the public pie for private purposes. Sometimes these purposes would be disguised as virtue, such as the pursuit of ideological convictions about smaller government, or the superiority of private sector methods for achieving outcomes. That was when they were susceptible to corruption inquiries. It was at that point, not after the commission had investigated every possible past case, that the eye should turn to the present – the way the “cleanskins” were now behaving.

A good general rule is that political parties should be thrown out after two or three terms, before they have become too compromised or corrupted by incumbency, and before the public administration has become so used to and comfortable with the incumbents that it has all become a cosy club, with many of the formal checks and balances gone into abeyance. One can be sure that the NACC will soon tire of examining ancient history.

It will do that long before it has run out of cases it could investigate. Long before the current government wants. The NACC will want to show that it is relevant. That, while being a scourge of corruption, it is not a partisan animal, focused only on exhuming bodies buried by the other side of politics. Indeed, being seen to be even-handed in carrying out its functions will be critical to public acceptance of its activities, as well as continuity when, perhaps much later, there is a change of government.

NACC will soon move on to the misdeeds of the Albanese government. That’s a good reason to handicap it now.

If experience in the states is any guide, that change in direction towards the activities of the government in office will come long before that government is ready for it. For Dreyfus, it will be seen as a kind of betrayal, given the size and wickedness of known past rorts by the previous government, and the, to him, minor peccadillos of the new one. He will be shown as having misjudged Dutton and the commission and having been altogether too smart for his own boots.

Over the past month, Dreyfus and Albanese made a pragmatic political decision to freeze the teals and other independents out of the making of the NACC legislation. Instead, they made secret, and so far unaccountable, deals with the coalition – a party which had been resolutely opposed to any workable integrity commission right up to the election. The deals resulted in much weaker legislation. The worst part of the grubby deal – but by no means the only one – was to effectively rule out public hearings, except in “exceptional circumstances.”

Dreyfus knows he has deliberately put in place a weaker commission than he and Albanese promised at the election. His dirty deal serves Labor’s long-term interests. An ongoing activist commission might prove over-powerful, out of control. It could cause deep political problems for a Labor administration. Luckily he could exploit Dutton’s reluctance to have an over-mighty standing royal commission. Thank heavens Dreyfus is cleverer and smarter than Peter Dutton.

Both Albanese and Dreyfus may be personally pure of spirit, but they know perfectly well that many of their colleagues are not. Some of the rorting spirit will be disguised by ideological words, about sharing power, and about getting the right people in place. In some cases, departments will connive at rorting because they are captured by the interests they are supposed to regulate. One can make corruption more difficult, easier to catch. But the ingenuity of systemic rorters, whether in the ministry or the administration, can never be underestimated.