With a tricky Budget challenge coming up, winning an election may be easy part 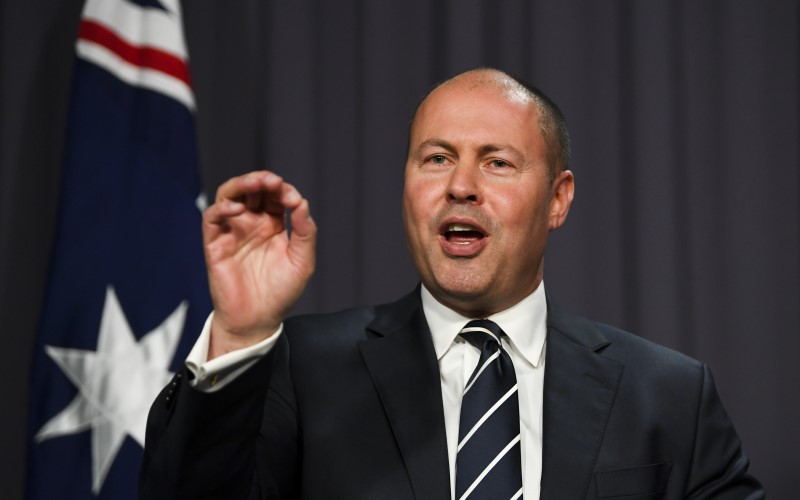 Whether it likes it or not, the party that wins the election will most likely be forced to raise additional taxation revenue not long afterwards.

A critical issue in the forthcoming election is, or should be, can we afford to pay for the different parties’ promises, and therefore how credible are these promises. This is assessed here by considering the fiscal capacity of the Commonwealth government after the election.

The next election will most probably be in May, preceded by a Budget on March 29. That Budget may well contain some further election sweeteners. Nevertheless, the latest Budget update, just before Christmas, probably provided a reasonably good idea of how much the Coalition will spend and tax over the next few years, as that update made provision for several billion dollars additional spending yet to be announced as part of the election campaign.

According to that budget update and the Intergeneration Report, the Coalition is planning for a budget deficit as high as 3.6 per cent of GDP in 2023-24, with significant budget deficits to follow for at least 40 years. Indeed, the deficits under the Coalition may turn out to be even bigger, if they end up promising more spending or lower taxes than they were planning at the end of last year.

Labor’s budget after the election

Understandably, Labor has yet to produce a comprehensive costing of its election program. But last week Anthony Albanese did set out Labor’s election program in terms of what he hoped to achieve over the next three years as prime minister.

In brief Labor’s priorities are to:

Albanese’s vision is “a country that is smart, innovative, and adaptive …. with secure, good-paying work”, where jobs “provide identity, community and connection”. To my mind, Labor’s plan represents a necessary but still modest reform agenda.

When pressed about how Labor will pay for this election program, Albanese has hinted that it will be done out of the proceeds from faster economic growth.

And it is conceivable that economic growth would be higher under a Labor government because under this Coalition government labour productivity only increased at an average annual rate of 0.7 per cent over the five years that preceded the Covid-induced recession. However, the Coalition’s budget projections already assume a recovery in productivity growth to an annual rate of 1.5 per cent, and these (optimistic) projections still show the sizeable budget deficits that I cited above.

Thus, it seems very unlikely that even if future economic growth is faster under Labor, that it would generate sufficient additional revenue to substantially reduce the budget deficits already projected for the Coalition.

Alternatively, Labor could seek to make savings in the present government’s spending programs. The Morrison government has a sad history of financing rorts for purely electoral purposes, including the well-known sports rorts, community safety programs and car parks. However, cancelling these projects would not be electorally popular, and in many cases it is probably now too late. Most importantly, it is unlikely that cancelling these projects would generate sufficient savings to pay for Labor’s alternative spending program.

Instead, the best source of the additional savings needed would be to not proceed with around $50 billion of spending on infrastructure projects that have never had a business case. But it is hard to imagine Albanese, of all people, agreeing to this, and again it would risk a political backlash in key electorates.

In sum, it seems most likely that whether a Labor or Coalition government is elected Australia is looking at a continuation of substantial fiscal deficits.

Do Budget deficits matter and why

In the past the Coalition has sought to attack Labor’s election program by asking how it will be paid for and asserting that taxes will inevitably rise under Labor. How far this line of attack will resonate with the public today is, however, a moot point, as the public has been encouraged by the government itself to think that budget deficits don’t matter any more.

So the Coalition is not on strong ground if it seeks to focus on how Labor will pay for future government services. The Coalition have not got a satisfactory answer about how it will pay for its own policies either.

Nevertheless, we do need to consider whether continuing budget deficits can be sustained or will any government be forced to rein them in – most probably in the life of the next parliament.

As I elaborated in a previous article for Pearls & Irritations, the size of the budget balance should match the size of the gap between private aggregate demand and the total supply potential of the economy. If private demand (the sum of personal consumption, private investment, and exports) is rising faster than the economy’s supply potential, then the government should be reducing its contribution to the overall demands on that supply potential by reducing its budget deficit or even moving to a surplus.

The most recent data show that unemployment in December was down to 4.2 per cent, which means that the economy is now back to full employment or very close to it.

Already there are signs that inflation is taking off, with consumer prices rising by 3.5 per cent over the year ending in December 2021. Some of this increase may reflect temporary factors, but the underlying rate of increase in consumer prices over the past 12 months was 2.6 per cent, which is well within the Reserve Bank’s target range for inflation of 2-3 per cent.

The consensus among economists, as reported in the media, is that the Reserve Bank will begin raising interest rates this year – quite a bit earlier than 2024 previously signalled by the governor of the Reserve Bank. What is curious, however, is that the media, while talking incessantly about the likelihood of interest rate rises, has had almost nothing to say about the need to tighten fiscal policy also.

This contrasts with the past when it was always considered that with the economy approaching its full capacity, then the government policies should be moving towards a budget surplus – not a continuation of the present substantial deficits forever.

Indeed, that is why the Coalition government under John Howard enacted a Charter of Budget Honesty that committed all Australian governments to “achieving budget surpluses, on average, over the economic cycle”.

Thus, the inescapable conclusion is that each of the two major political parties will go into the election with policies that will lead to a budget deficit which is incompatible with maintaining economic stability and low inflation. Whether they like it or not, it is highly probable that whichever political party wins government will be forced to raise additional taxation revenue not long after the election.

No doubt some will argue that balancing the budget should be achieved not by raising additional taxation but by cutting government spending. However, this is what the Coalition has been trying to do, and it has only damaged service provision without any hope of restoring a balanced budget in the foreseeable future.

On the other hand, if we compare the size of government in similar countries in 2019, before the distortions of different responses to Covid, we find that government expenditure is lower in Australia than in all other comparable countries (see table). Similarly, taxation is also lower in Australia compared to all other countries except America where Trump had introduced unsustainable and irresponsible tax cuts, and the US is now suffering from high inflation as a consequence.

Total government outlays and revenue in 2019 as percentage of GDP

The truth is that if Australians want – as they do – the services that are consistent with the preferences of a high-income democracy, then we must be prepared to pay for them, and not become second-class citizens. Equally, if Morrison wants to assert in the election campaign that taxes will rise under Labor, the obvious reply is that will be equally true under the Coalition.

In short, it would be better if both the major parties were honest and outlined their plans for tax reform to raise more revenue before the election. The longer the new government waits after the election before announcing its tax reform plans, the more the inflationary pressures from excess demand in the economy will have increased, thus making the task of restoring economic stability increasingly difficult.

Furthermore, any such delays before the necessary tightening of fiscal policy can be expected to put more pressure on monetary policy. In that case interest rates will rise by more, increasing the pressure on new home owners, and is this what we want?