Women on Death Row in Singapore: how gender discriminations create a ‘double punishment’ 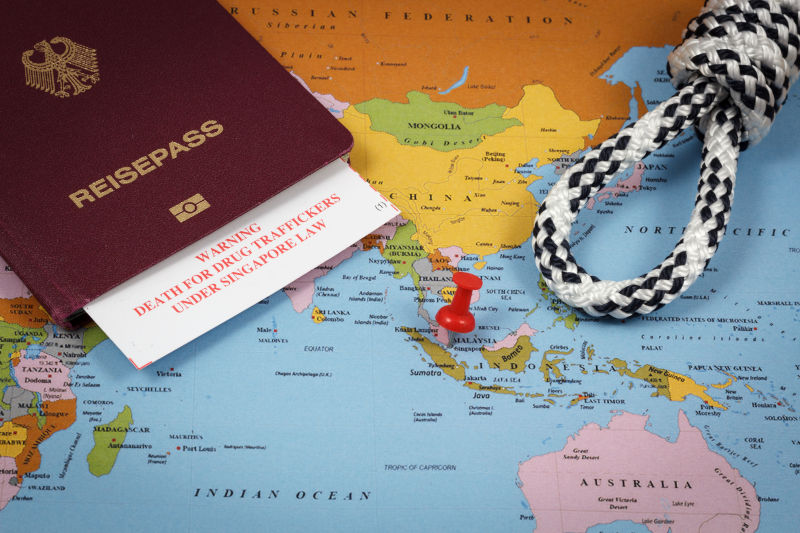 Women on death row in Singapore face a stark reality of isolation, harassment and intimidation. Singapore’s enthusiastic application of the death penalty, particularly, for minor drug offences, has recently garnered the spotlight after Singapore have executed at least 11 men since March 2022.

In a submission to the 85th Session of the Committee on the Elimination of Discrimination Against Women (CEDAW), the stark realities for women in capital cases was examined, further compromising Singapore’s reputation as a leader in arbitration and as a country committed to the fair trial process.

This article is a summary of the Submission to the 85th Session of the Committee on the Elimination of Discrimination Against Women for its upcoming review of Singapore authored by The Advocates for Human Rights, The World Coalition Against the Death Penalty, the Anti-Death Penalty Asia Network and the Capital Punishment Justice Project.

Singapore adopts a “high application” approach to the death penalty. Execution is the mandatory punishment for homicide with the intention of causing death but, also, for drug possession and trafficking. Except in very limited cases, a person must be sentenced to death for possessing 15 grams of pure heroin or more than 500 grams of cannabis, save for limited exceptions. Despite Singapore’s Constitution enshrining the principle of equality of all persons before the law (Article 12), research shows that gender bias and discrimination severely compromise women’s access to justice, especially, in capital offence cases.

The vulnerabilities related to being a woman

A report released in 2021 by the Cornell Centre on the Death Penalty Worldwide reported that, globally, there has been an increase of 17% in incarceration rates of women since 2010 with punitive drug laws seen as a major driver of this trend. In Asia and the Middle East, drug offences are the second most common crime for which women are sentenced to death.

While some women may make a conscious decision to traffic drugs, many women are tricked into carrying drugs, unwittingly. Many such women are targeted by men who become their trusted intimate partners under false pretences before asking women to transport items that contain drugs.

Singapore’s’ Misuse of Drugs Act 1973 was amended in 2012 to allow for judicial discretion to be allowed in respect of the death penalty for drug offences in very limited circumstances. One of these circumstances requires the offender to meet the requirements in s33B(2) that the persons’ role be that of a low-level offender. In such cases, s33B(3) allows the Public Prosecutor to certify that they have determined that “the person has substantively assisted the Central Narcotics Bureau in disrupting drug trafficking activists within or outside Singapore”. While these laws are applied to both men and women, women are more likely to be low level couriers who are least likely to have valuable information to assist law enforcement. As a result, women are less likely to get any benefit from this limited avenue of discretion.

In Singapore, access to counsel must be provided within a ‘reasonable time’. However, the Courts have held that this can be after several weeks once police have commenced their investigations and is justified on the basis of non-interference with police investigations. As a result, quite often, accused people often only ever receive legal advice after investigations have been completed.

This increases the risk of manipulation of women. Research by the Cornell Center has highlighted that, particularly, where there is a male co-defendant, women are often pressured to sign confessions attesting to their culpability and the innocence of the men. In many such cases, the women are not literate.

Many women sentenced to death in Southeast Asia are in that position due to crimes that arise out of “their relationships, be it with their dependants, intimate romantic partners, friends, or relatives.” Especially, where the penalty is mandatory, the law and the courts fail to recognise the role of circumstances including how past trauma from previous abusive relationships provides important contextual mitigation of a women’s involvement in drug offending.

A gendered approach by the courts

Where women are convicted for violent offending such as murder of a partner, judges often have “relied on gender stereotypes to interpret women’s circumstances and motivations before sentencing them to death. In drug cases, courts are reluctant to accept that a female defendant was tricked or pressured into transporting drugs unless she matches the profile of helpless female victim.” Courts will impose harsher penalties where women fail to adhere to their gender stereotypes and gender determined role as mothers and carers.

A key barrier to improving the situation for women on death row is the issue of access to information.

It is estimated that, currently, there are at least 2 women on death row and around 55 men. The conditions women on death row endure are also shrouded in secrecy. There is little known about their age, ethnicity, dependent children or their crimes of conviction.

Another barrier concerns the conditions in which women are held while on death row. Singapore’s Prison Regulations s162(2)(a) specifies that every person “awaiting capital punishment … must be confined apart from all other prisoners”. This means those on death row are in solitary confinement for years, are confined alone, with no meaningful contact with others, for at least 23 hours a day. They are generally not permitted to go outside for fresh air or exercise and have extremely limited visitation rights.

To address the concerns raised above, the CEDAW Submission makes a number of recommendations for the Singaporean government including: