Truth-telling with Walpiri people at the heart of new opera 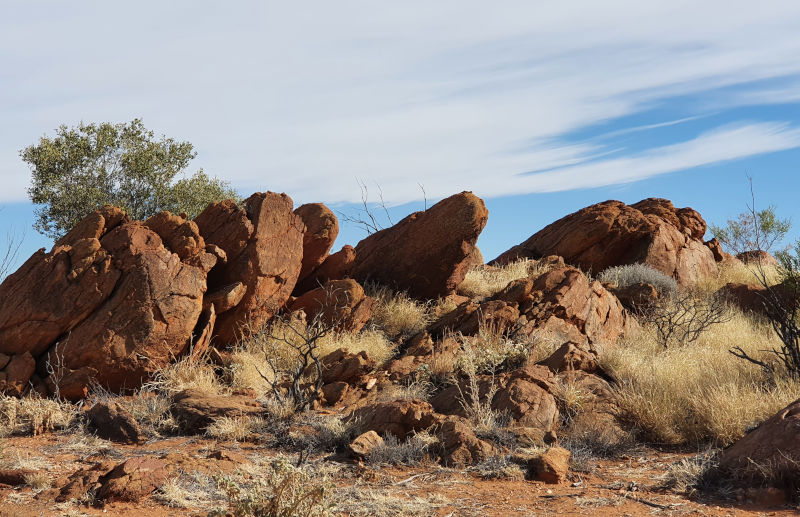 Jack Waterford warned recently that ‘it’s time to get fair dinkum, or the Voice proposal will lose momentum and support’. A way to do that is by taking a two-way approach to telling shared stories. That’s what the composer Anne Boyd is doing as she creates a musical language for the Australian landscape. Her new opera tells the story of Olive Muriel Pink (1884–1975), artist, Aboriginal-rights activist, anthropologist and gardener, whose work with the Walpiri people lives on in the Olive Pink Botanic Garden in Alice Springs.

The Olive Pink Botanic Garden in Alice Springs is an important character in a new opera to be premiered on that very site in October. The moment the composer, Professor Emerita Anne Boyd, entered the garden she could feel Pink’s presence. She knocked on the curator’s door and told him she was thinking of writing an opera. She was serious, and the project began. ‘I have been growing this opera for eight years (10 if you include the COVID years). I planted the seeds and as they grew, I weeded and pruned the work, and it’s stronger for it.’

Olive Pink is the second in a possible trilogy of operas by Anne Boyd about Daisy Bates, Olive Pink and Annie Lock. All were pioneers in working with Aboriginal people, all flawed characters – the best type of operatic heroes – and all part of the continuing effort of finding a shared understanding between First Nations people and other Australians.

The pursuit of that understanding and of a musical language for the Australian landscape is what drew Boyd to Olive Pink and to her garden, which she first visited while in Alice Springs to attend a symposium about the spiritual aspects of the bush.

When I asked Boyd who wrote the libretto, she answered that Pink had, in the sense that Boyd used Pink’s prolific letters both for the narrative and as inspiration for the music:

Olive’s was a highly illustrated writing style, with capitals in the middle of sentences and lots of underlining. These helped to create the musical dynamics.

The opera has a prelude, three scenes and an epilogue. It focusses on Pink’s later life in the garden. In the second scene, she hosts one of her famous tea parties to celebrate the recent engagement of botanist Des Nelson and Pat Colley. Des compliments Pink upon the garden and is understanding when she explains that the occasional dead tree is because the person after whom she has named it has offended her in some way; as a consequence, it is not being watered. The Hasluck Acacia tree, however, remains in good condition because, while Pink disagrees with (then minister for territories) Hasluck’s views on Aboriginal citizenship and assimilation, he did support her to establish a botanical reserve for desert plants.

The colours and tones of Central Australia, so changeable during the day, are also captured by the orchestra’s score: cellos and guitars represent the earthly colours of the geology, the high wisps of the strings the olives and mauves of the flora. The caterpillar country of the MacDonnell Ranges provides the melodic contours of the opera that came to Boyd, unconsciously at first, as she ran in the early morning from town out to Simpson’s Gap, observing the silhouettes of rock formations sharpen in the light.

Aboriginal storytelling depends on dance and song – it too is musical drama – and Boyd draws on both traditional rhythm-making, as well as the Central Australian Aboriginal Women’s choir and their gospel singing. The last lines, translated from Arrernte, Pink sings are from a song by Hermannsburg country singer Gus Williams: ‘Goodbye my country, my country goodbye. God/Eternity goes with me. Comforts me.’ Williams’ grandson, Nicholas, plays the part of Warlpiri man, Johnny Tjampitjinpa, who worked alongside Pink to create the garden.

This merging of influences pays tribute to Pink’s respect for Aboriginal people and their spirituality and her efforts to build a ‘secular sanctuary’ for the Warlpiri, an area from which police, government and missions would be excluded. While she did not succeed in this endeavour, after much hard work and lobbying she did manage to establish a Flora Reserve, a garden she wanted to be called Alchera-Jugulba, conjoining Arrernte and Warlpiri terms for Dreamtime, a place of peace and beauty for future generations to enjoy.

Boyd’s two-way approach to telling Pink’s story aims to connect us culturally and spiritually to the Aboriginal people of Central Australia. It was Kevin Rudd’s Apology to the stolen generations of Aboriginal children in 2008 that inspired Boyd to research historical figures who had worked closely with Aboriginal people. Mparntwe elder, Doris Stuart, who is an adviser on the project says:

The story of Olive Pink is a story that can be shared by Aboriginal and non-Aboriginal people. When people have something in common, they respect each other and listen to each other. That is why telling this story is important to Alice Springs.

But her inspiration for a musical language to convey the Australian landscape also comes from further afield, as I discovered when I asked about the place of the shakuhachi, the Japanese end-blown flute made of bamboo, in the score. It was Japanese rather than European music that evoked memories of Boyd’s childhood spent on a grazing property in western Queensland. The idea of using the shakuhachi, traditionally played outside as it will be in Alice, came to Boyd as she wandered around the garden’s stone formations, which reminded her of the deliberately stark layout of rocks in a Japanese garden. The instrument’s role is to embody Olive’s spirit, soaring over everything.

The Olive Pink Opera is produced by the Olive Pink Botanic Garden with professional assistance from acclaimed Music Director, Jonathan Tooby, and 2022 APRA/ AMCOS award winning Producer and Assistant Music Director Claire Kilgariff. Co- Creative Directors of the Opera are Nicole Evans and Steve Kidd. Morris Stewart is the Artistic Director of the Central Australian Aboriginal Women’s Choir and the Desert Song Festival. Its premiere is on 8 October 2022.

This article first appeared in the October 2022 issue of Australian Garden History.