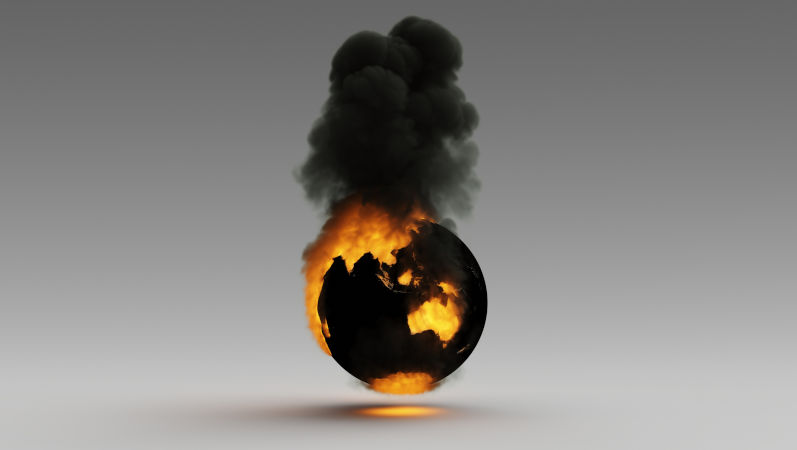 Could anthropogenic climate change result in worldwide societal collapse or even human extinction?

For a variety of reasons climate researchers have been reluctant to make predictions of climate catastrophe although the 1988 Toronto Conference declaration did describe climate change as “second only to a global nuclear war.”

The authors write: “Prudent risk-taking requires consideration of bad to worst case scenarios. Yet, for climate change, such potential futures are poorly understood. Could anthropogenic climate change result in worldwide societal collapse or even human extinction. At present this is a dangerously underexplored topic. Yet there are ample reasons to suspect that climate change could result in a global catastrophe.”

They look at possible mass extinction events; mechanisms which could result in mass human mortality and morbidity; societies’ vulnerability to risk cascades from things like conflict, political instability and systemic financial risk; and, how these multiple ‘strands of evidence’ can be synthesised into an ‘integrated catastrophe assessment’.

Most research on impacts have focussed on climate outcomes from below or around two degrees warning “erring on the side of least drama”. Yet even without worst case responses they say “the current trajectory puts the world on track for a temperature rise between 2.1 C and 3.9 C by 2100. If all 2030 nationally determined contributions are fully implemented warming of 2.4 C might be expected.

“Temperatures of more than 2 C above pre-industrial; values have not been sustained since before the Pleistocene Epoch (or more than 2.6 million years ago)”, they say.

The authors argue that exploring climate change catastrophe is anchored in the fact that “risk management and robust decision-making under uncertainty requires knowledge of extremes and that knowing the worst cases can compel action.”

They give four reasons to be concerned about climate catastrophe. First, the warnings from history and that climate change has played a role ion the collapse or transformation of numerous societies – from the Pharaonic era to Arabia and the emergence of Islam.

Second, climate change “could directly trigger other catastrophic risks such as international conflict, or exacerbate infectious disease spread and spill over risk.”

Third, climate change “could exacerbate vulnerabilities and cause multiple indirect stresses (such as economic damage, loss of land and water and food insecurity) that coalesce into system-wide synchronous failures”.

Fourth, climate change “could irrevocably undermine humanity’s ability to recover from another cataclysm such as nuclear war.”

Moreover, these risks and “different causes for catastrophic concern are interrelated and must be examined together.”

The IPCC has now released 14 special reports on climate change yet none of them have covered extreme or catastrophic climate even though a special report on tipping points was proposed in the seventh IPCC assessment cycle. Such a report now would not only trigger further research but also galvanise a groundswell of public concern and help the world focus on how much is at stake in a worst-case scenario the authors suggest.

The PNAS article references to the Pharaonic era and Islam are illustrated by two more articles.

PNAS published (30 August 30) a paper by Harvey Weiss on pyramid building and collapse. Weiss looked at 22 Egyptian Old Kingdom pyramids (2675-2250 BCE) and the impact of water flows on the abandonment of construction, crop failures and the collapse of the Old Kingdom.

Other explanations – such as disruption of Old Kingdom long-distance trade – have been discussed but Weiss asserts that these collapse arguments are a post hoc fallacy and that the trade collapse was an effect not a cause of the collapse. Instead, it was probably due to climate change impacts on Nile flows.

In another PNAS paper (July 2022) nine authors look at the impact of drought and societal change and the environmental context of the emergence of Islam.

They suggest that the Arabian first half of the sixth century CE was marked by the demise of Himyar, the dominant power in Arabia until 525 CE. They argue that the significant social and political changes which followed – including the emergence of Islam – can be linked to unprecedented droughts and severe aridity between 500 and 530 CE.

Meanwhile, while we are looking at suitable culprits contributing to climate change problems two others are now in the frame.

A new book – The Pentagon, Climate Change and War by Neta Crawford – reveals that between 2001 and 2017 during the Iraq and Afghanistan invasion and wars the US military emitted 1.2 billion tonnes of greenhouse gases, including 458 million tons of carbon dioxide attributable to post-9/11 war related fuel consumption.

This makes the US military the single largest institutional consumer of energy in the world.

So, while the US military might be great at destroying things and not that great at winning wars it’s also not that great at protecting the environment – as the Vietnamese and US soldiers suffering from exposure to Agent Orange could testify long before Neta Crawford put her fingers on the keyboard.

UN Secretary-General, Antonio Guterres, directed his September General Assembly meeting opening address to the second saying that the climate crisis was “the defining issue of our time” while calling on energy companies and affiliated businesses to take responsibility for the environmental damage they cause.”

“We need to hold fossil fuel companies and their enablers to account. That includes the banks, private equity, asset managers and other financial institutions that continue to invest and underwrite carbon pollution,” he said. “And it includes the massive public relations machine raking in billions to shield the fossil fuel industry from scrutiny. Just as they did for the tobacco industry decades before, lobbyists and spin doctors have spewed harmful misinformation. Fossil fuel interests need to spend less time averting a PR disaster – and more time averting a planetary one.”