Distracted by the submarine bauble, Labor and the media miss the point 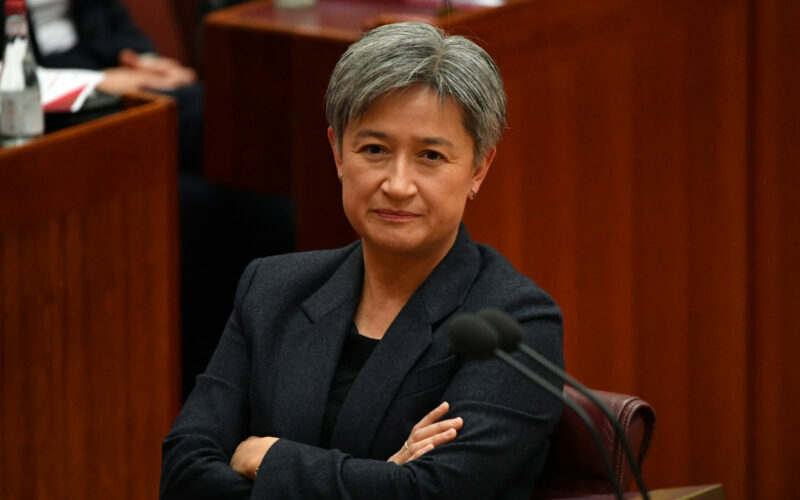 Australia is about to become home to American bases, and potentially a nuclear target, and this seems to have escaped the attention of the Opposition and the media.

The plan is “to bring rotations of US fighters and bombers to northern Australia” and potentially “acquire more rotational basing for its submarines in Perth, Western Australia”.

The greatest concern arising out of the latest developments in Australian-US strategic relations is the shallowness of the Opposition’s understanding, and lack of media scrutiny. That Labor has been distracted from the central issues was marked in Senator Penny Wong’s recent speech. The thin media analysis of the speech’s shortcomings highlights its failures.

Negotiations between Australia and the US led to two separate but closely related agreements. The Americans agreed to share advanced military technology with Australia, including nuclear propulsion knowhow. This initiative, which might deliver a nuclear powered submarine capability by 2050, and which might deliver other unspecified benefits in missile and cyber capability, disproportionately obsessed the media and the Opposition.

Simultaneously at the AUSMIN meeting between foreign and defence ministers and their American counter parts Australia delivered the quid pro quo. Agreement was given for unconstrained access for US military aircraft and vessels to rotate through Australia, and for the establishment of facilities to support US high-end warfighting in Australia. This deal remains largely unexamined by the media and the Opposition.

Like three year olds offered a shiny trinket, Labor and the media were easily distracted. It might have been expected that the government’s trading of imminent American basing for submarine and other technology was noticed by the advisers to Anthony Albanese and Wong. Apparently not.

According to Foreign Policy, the day before the AUKUS and AUSMIN announcements, Biden administration officials briefed that the “deal to build nuclear-powered submarines with Britain and Australia” was designed “to secure more US military basing rights in the region”. In particular, the plan was “to bring rotations of US fighters and bombers to northern Australia” and potentially “acquire more rotational basing for its submarines in Perth, Western Australia”.

Even if the Labor advisers didn’t see the coverage in the US, didn’t they or their bosses actually read the AUSMIN joint statement? This is a key strategic policy document.

Did the experts in the media and Opposition not pay attention? The joint statement clearly announces, inter alia, the rotational deployment of US aircraft of all types in Australia, increased logistics and sustainment capabilities of US surface and subsurface vessels, and the establishment a combined logistics, sustainment, and maintenance enterprise to support high end warfighting and combined military operations in the region.

However, neither Albanese or Wong have publicly referred to the increased US military presence which will result from AUKUS, which should be of intense interest to Australian voters. Perhaps even more alarmingly, the media hasn’t taken either the government or the Opposition to task for dodging the issue.

The Coalition government is most likely avoiding any discussion of the increased presence of American forces to prevent a controversial debate. If the Opposition and the media are across the deal and are ignoring it, then a fundamental failure of representative democracy is occurring.

Perhaps even more worrying is the prospect of the current media and political elite not having the intellectual ballast, the curiosity, and the research and analytical capacity, to see the largest shift in Australia’s strategic circumstances since World War II is not the submarines, but turning Australia into a target.

Just to repeat, abandoning national sovereignty, abrogating strategic autonomy, turning Australia into an operational base for war operations into East Asia, and thereby making it a high value target in any conflict between the US and China, irrespective of Australia’s role, is big strategic news. Australia will become a target now, not at some vague point in 30 years when some as yet unclear subsurface capability arrives.

Disappointingly, Wong’s speech was full of platitudes and devoid of strategic analysis. However, not more so than the government’s trite and inadequate explanations of the decisions. While she did point to “valid questions about Australia’s sovereign capability”, this referred only to “how will [Australia] control the use of technology and capability that is not ours” and not to the build-up of US warfighting capability. The issue of Australia’s dependence on US technology is beside the point. The paucity of the strategic conversation among political elites and media commentators, and their lack of engagement with the public on issues bearing on the long-term fate of the nation, is all too evident.

In the decades between now and 2050, a reasonable date for the nuclear-powered fleet to be fully operational, China’s military power and strategic reach will have grown enormously. The new submarines will be irrelevant to Australia’s self defence capability over that time. It’s highly debatable the new submarines when they arrive will change anything in the regional power balance, and anyway until they arrive Australia increasingly will become vulnerable to attack.

The most discussed scenario for near term conflict between the US and China involves the forcible reabsorption of Taiwan. In that context the prime minister’s claim that “acquisition of nuclear-powered submarine technology will form part of a set of strategic deterrence capabilities” is just nonsense. If it happens it will be before the first hull is wet. More importantly, the other part of the deal will make a strike on US forces and support assets in Australia more likely in a crisis over Taiwan.

In fact, during any conflict between China and the US over the next decades, Australia’s military capability won’t have changed greatly, particularly Australia’s reach into the South China Sea. Therefore, in the coming critical decades, the decision to acquire nuclear-powered submarines will be irrelevant for either deterrence or operations.

The public deserves better. It deserves an Opposition that recognises and addresses vital national interests and is not deterred from raising the hard issues for fear of being accused of lacking bipartisanship. It deserves an expert and professional media that informs and holds both government and Opposition to account. Currently they have neither.