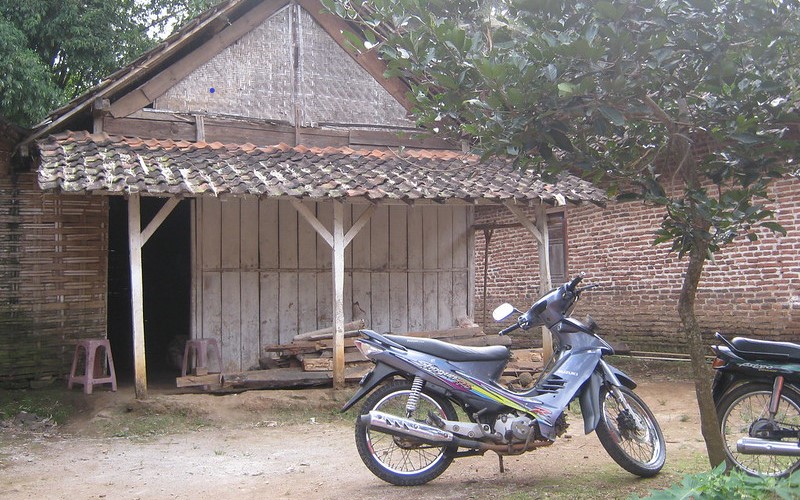 The Indonesian government’s supports are miserly yet the oldies seem to get a better deal that those in Australia. (Image: Flickr / PutriHayyu)

Australia’s aged-care policies include keeping frail oldies apart from society. Indonesia does the opposite – seemingly benefitting all.

Our sophisticated elderly care system ranges from help at home to palliative clinics. The Medical Journal of Australia reports almost 20 per cent aged above 80 and six per cent of 65 plus get institution long-term care. We have “the highest proportion of older people living in institutional care compared with 11 other nations”.

What’s seldom mentioned is that these facilities are not on call. Waiting times to enter federal-funded facilities have reportedly now reached five months.

What the figures also don’t show are the intangibles — the feeling of being wanted, welcomed and included, whatever the client’s age. So some social workers are experimenting.

The ABC TV documentary series Old People’s Home for 4-Year-Olds follows 11 “retirement home residents” and 10 preschoolers spending time and playing games together to soften the pains of loneliness, moods, depression, illness, despair — all the emotions eroding as we age.

Looking at how our northern neighbours handle ageing it’s clear the Indonesian government’s supports are miserly yet the oldies seem to get a better deal. No need to muster kids to cheer the grey-hairs; in the archipelago next door it’s community care in kampong, villages and older suburbs.

About 40 per cent of Indonesians live in rural desa (hamlets). Around 5 am after fajr prayers, the old folk are most visible — easing the younger generation’s start to the day with cleaning and cooking, washing and bathing, much of it in public.

Sure, they move slowly, can be forgetful and often need a stick for support. But they’re not a nuisance. Those too weak to wander can nurse a babe and together unfold the day with lullabies.

They see neighbours readying kids for school, the mums checking uniforms and satchels. Be tidy, be polite. Never be ashamed. Say goodbye to gran, kiss her hand, touch her brow, then your heart.

This is Salim. In this mystical mix of ancient traditions, we show respect for age, the place where we’re all heading.

Then come the itinerant sellers of veggies, chicken meat and household needs. They stop for sales and chats, circulating the gossip.

In unfenced front yards, sons and grandsons fix motorbikes, clean hoes and sharpen sickles. In central East Java the irrigated padi where many labour are so nutrient-rich that three crops of rice a year are possible.

The frail watchers on the hard-wood verandahs are vital to village life, commentators on the hourly happenings, custodians of local wisdom, and the memory banks in a country where books are rare.

When they breathe no more, the timber and tile dwellings they inherited will pass to the next generation. No need for lawyers. They’ll be buried at the edge of the desa like we once did in village church graveyards, not a huge and distant impersonal urban cemetery.

Cities are different. The 60 households in our suburban cul-de-sac are a mix of professionals, tradies and retirees. The kids used to play in two empty blocks nearby.  One has a new mosque, the other a shopping mall, since closed.

Now the only space is the street / badminton court / soccer field / BMX track and a school of nature, nippers cuddling kittens produced by the clowder of semi-ferals that litter in attics. It’s also the elders’ entertainment.

It’s not all sweet harmony. A couple of stroke victims park wheelchairs in the street, their drooping limbs reminders of a moment of dreadful, crippling pain, cautionary tales to smokers. Retired bureaucrats suffering relevance-deprivation syndrome get grumpy with neighbours whose visitors park across gateways.

The mobile traders once advertised with music, rhythmic taps on the wooden sides of their carts. Now battery-powered speakers broadcast repetitious promotions. There’s a plague of strolling minstrels asking payment for serenading the street, though casing for unlocked gates. They get paid to go away.

Underworked bureaucrats come by to check on the welfare of lampposts and power poles. They always have time to yarn about themselves.

The busyness involves everyone from tots to totterers; all belong. The elderly are not hidden. Nor are they lonely. Neighbours may not be friends but all know who they are and what they’ve done. When one dies we mourn together whatever our ages and faiths.

The megalopolis have a few places for pensioners, euphemistically known (in English) as “home sweet homes” and solely for the rich. Rumah kesejahteraan (welfare shelters) are run by local councils for the homeless and mentally ill, but care for the aged is largely carried on the shoulders of families.

That weight is becoming heavier as the pool of potential carers shrinks (2.29 births per woman, half the rate of the 1980s) and the population ages. Ten years ago less than 5 per cent was over 65 – now it’s 6.26. In Australia, it’s nudging 16 per cent. The average Indonesian’s lifespan is 72; add 11 years for those Down Under.

As in the West, women are keeping their careers after marriage, meaning daughters and daughters-in-law are none too keen on staying home to tend crotchety gran. So live-in helpers prepared to clean soiled sheets along with the dishes are in demand. That’s not a job for young maids who prefer Singapore and Hong Kong where wages are higher. This has led to the curious situation in Indonesia where only a few years separate carer and client.

In Australia, helpers need certificates in aged care, first-aid and a police pass to get work. The average wage of $28.38 an hour is considered low. In East Java, the same job as a live-in draws Rp 1.5 million ($150) a month plus food. Word-of-mouth recommendations replace qualifications. The cost is triple in Jakarta.

If Old People’s Home for 4-Year-Olds ever hits free-to-air TV in Indonesia, viewers would puzzle why a rich Western nation claiming to care tolerates segregation. How could the young discard their elders, lock them away even if the surroundings are clean?

The Australian system may be efficient and profitable but it’s an industry. Seen from t’other side of the Arafura Sea it seems wrong, uncaring even.