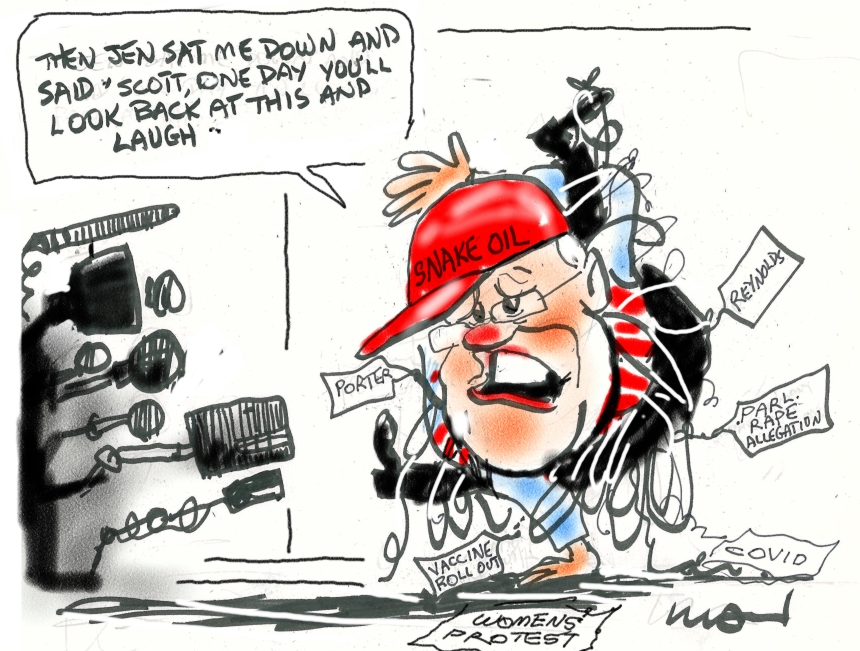 The majority of Australians aren’t that interested in politics. They have their life to get on with and really only get involved in issues which affect them directly – like vaccinations – or which touch a nerve as Morrison’s handling of women’s issues has with Australian women.

Elections make politics difficult to ignore but most people vote for the party they voted for last time and some of them even make up their mind on the way to the polling booth.

So how do they react when a Government embarks on a frenzy of announcements including promises, photo ops in all sorts of gear designed to make them appear normal but instead only ridiculous?

We are soon going to find out.

Scott Morrison has always been tactical – thinking tactically and speaking tactically with well-rehearsed quotable lines. But since his Government has run into trouble he has redoubled his efforts.

One day in West Australia doing exercises with Twiggy Forrest. The day before that announcing billions for South Australia for gas, renewable energy, new power lines and a few other things which may or may not have included free pasta and a bottle of Clare Valley vintage wine.

The next minute a leak about $10 billion over four years is being included in the Budget for aged care – despite the leaked rumoured figure being less than the annual $9.8 billion the Grattan Institute has estimated is needed to implement the Aged Care Royal Commission recommendations.

The next day a very belated Royal Commission into veteran suicides which, rather than prompting congratulations, will probably prompt the thought – why did it take you so long? And why didn’t they just plough some of the hundreds of millions lavished on commemorations or the Australian War Memorial vandalism into immediate help?

The days before that a few other things which were launched with lots of razzle-dazzle so dazzling most Australians have either forgotten them already or not even noticed them.

Politicians like deploying big numbers but many people can’t grasp what they mean and the politicians can’t take the risk – as may happen with the aged care announcement anyway –of translating the big number into what it means for individuals and families.

With many problems announcing more money seems like the quickest responses but the money is often never enough. In Morrison’s case, as with bush fire recovery funds, it’s not even all spent a year after it was announced.

The big numbers also convey nothing about the root problems they are ostensibly addressing.

More money is important, particularly to reverse the savage cuts the Morrison Government has made to organisations it hates – like the arts, the ABC and the Australian National Audit Office. But often, as in the aged care situation, a totally new approach to regulation to ensure adequate professional staffing and ending rip-offs and neglect associated with poor but expensive care is equally important.

There are two risks with this announcements approach. First, it has to be part of a larger strategy. In Morrison’s case, the only discernible strategy is to either be seen to be doing things and/or to distract us from other things he doesn’t want us to look at. Second, it becomes so frenetic that any meaning or point is lost.

Admittedly the frenetic nature does have one advantage, it reinforces the fact that mainstream media seldom question the announcements and simply report them. The announcement – yet again – for more spending on carbon capture gets reported without any mention of its illusory nature.

Similarly, the media breathlessly report the Morrison hubris that Australia will get the Biden summit to look at how the world will reduce carbon levels rather than just targets and will ‘push back’ on any criticism. The success of this approach was demonstrated by Morrison speaking 21st out of 27 nations and after key players such as Bangladesh, Brazil and Bhutan.

Needless to say, the summit technology wasn’t too flash but in Australia’s case that could have been because of our 61st world-rated NBN speed. A great indication of our ability to deliver on a technology-led carbon reduction strategy.

At present, his tactics are reminiscent of those late-night TV ads of yore selling useless gadgets, used cars or sets of LPs.

In marketing, it is a truism that brand recognition is very important. But more important is the credibility and trust the brand image communicates. Most important is that everything that’s done to promote the brand is consistent with the brand values.

Even a failed marketing man like Morrison can probably mouth some platitudes about brand values and what they stand for. He might even know about the need for consistency in every announcement and initiative taken to promote the brand. Worse he may just believe his own schtick. Most probably nothing in this current strategy will create such consistency and trust.

It’s too early to make an authoritative judgement about all of this. Probably the sheer barrage of messages and announcements are crowding each other out and failing to get any individual traction.

Possibly the frenetic tone is encouraging people to switch off. Equally possibly they will start to get very irritated – particularly when words aren’t followed by actions.

But whether it is a symptom of deep systemic dysfunction or just a very poor marketing strategy – if all Morrison can come up with to deal with his current problems is more and more announcements followed by ineffective action he may be doomed.