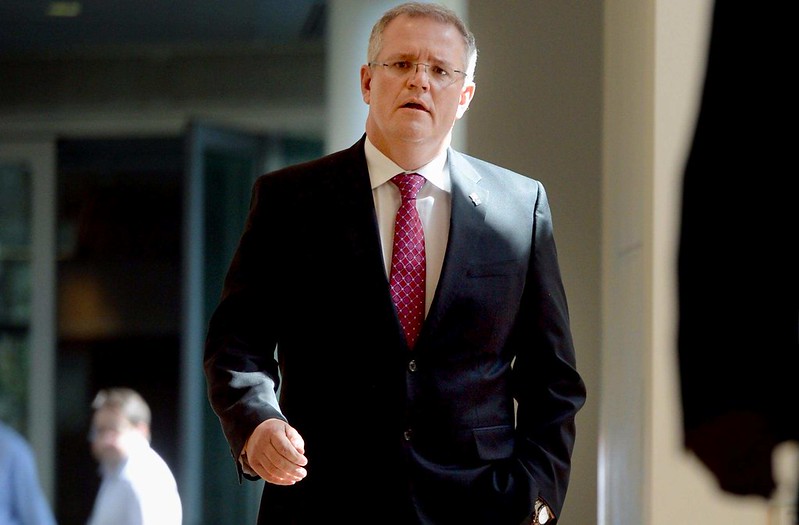 In his remarks Morrison has almost seemed to be including China in his condemnation of what Russia, not China, is doing. Image: Flickr

Prime Minister Morrison seems to want to fix in concrete what he says he and we should most fear—a Russia-China “alliance of autocracies”. He treats similar responses to the Ukraine crisis by China and by our fellow Quad member India very differently. Could the coming election be the reason?

In his constant aggressive comments on China, Morrison not only sounds like “the mouse that roared”—to recall an old British movie—given our extremely limited current defence capacity, but also sounds as if he positively wants to bring about what he claims to fear most. He gives room to the claim that China knew in advance what Russia was going to do in Ukraine, though we have no proof of that, and then goes on to demand that China condemn Russia and join in the sanctions against it. He must know that this would be very difficult for China to do, given the wide-ranging agreement between the two countries announced during the Winter Olympics. He also pays no attention to the facts that China has not supported Russia in the votes in the Security Council and General Assembly, and that Foreign Minister Wang Yi has said that every country is entitled to have its sovereignty and territory respected, and that that applies to Ukraine. According to very recent reports China has also offered to act as mediator between Russia and Ukraine, with which it has quite strong relations in various fields.

Rather than seeking to make the most of these actions, statements and possible opportunities, as the United States through Secretary Blinken has reportedly been doing, Morrison seems to have taken every opportunity simply to demand publicly that China condemn Russia and join in the sanctions against it, to claim that China has formed an “autocratic alliance” with Russia and will at some point act against Taiwan as Russia has against Ukraine, and that we and our Quad partners and others must therefore arm ourselves to oppose this.

But what about the Quad partner, India, that has, like China, a long, serious, and complicated relationship with Russia? It, like China, abstained on the Russia resolutions in the United Nations. But, according to a report in the “Weekend Australian” of 5-6 March, Morrison said on 4 March that he could not draw an “equivalence between India and China whatsoever” in their responses to the Ukrainian crisis, saying that Beijing was working in “instinctive alignment” with Putin’s regime, while India was “seeking to ensure that the violence ends”.

In his remarks Morrison has almost seemed to be including China in his condemnation of what Russia, not China, is doing. Is it sensible to be running them together like this? In an article in “The Australian” of 7 March Ben Scott, who directs the project on Australia’s Security and Rules Based Order at the Lowy Institute, takes a different tack. He writes that “Putin may not have fully disclosed his intentions to Xi and China is clearly uncomfortable about being associated with Russia’s behaviour…..Beijing abstained rather than vetoed a UN Security Council resolution ‘deploring ‘ the invasion. So Biden should continue refraining from speaking of China and Russia as common foes and seek to engage Xi and Putin separately.” One would think that that advice applies as much to Morrison as to Biden.

In taking the line he does Morrison is also ignoring the clearly intentional and authorised conciliatory remarks made by the recently arrived and senior Chinese Ambassador, who called for Australia and China to try to meet each other halfway—not an offer which one would think should be ignored, coming as it does from our major trading partner and the most consequential country in Asia.

So what is it all about? It is hard not to conclude that Morrison’s fervent embrace of the simplistic “autocracies versus democracies” world-view, his demonisation of China and his enthusiasm for weaponry essentially designed to combat only it, reveal his intention to run a national security, “khaki” election campaign.  Indeed in his address to the Lowy Institute on 7 March he made clear that he will run in part on the claim that the Coalition has superior national security credentials. So we know what to expect, but we should take his claims with a grain of salt, not regard them as necessarily corresponding too closely to the real world—-and hope that the campaign does not do too much harm to our national interests.