The doomed impeachment has helped Trump and damaged Biden. The election is now Trump’s to lose and the Democratic nomination is Sanders’ to lose.

Some readers of Pearls and Irritations were unhappy with my analysis, back in October, of the politics of the drive to impeach President Donald Trump. Increasing numbers of people seem to find it difficult to distinguish between impartial analysis and partial advocacy: if you say something is likely to happen, it can only be because you want it to happen. That’s a false equation. Furthermore, as an advocate, you may detest the sites that Trump supporters inhabit. As an analyst, anyone who wants to understand the nature, breadth and depth of Trump’s support had better read them, for the liberal media is still clueless.

Now that the impeachment has run its course, it’s time to revisit the major strands of my original analysis. 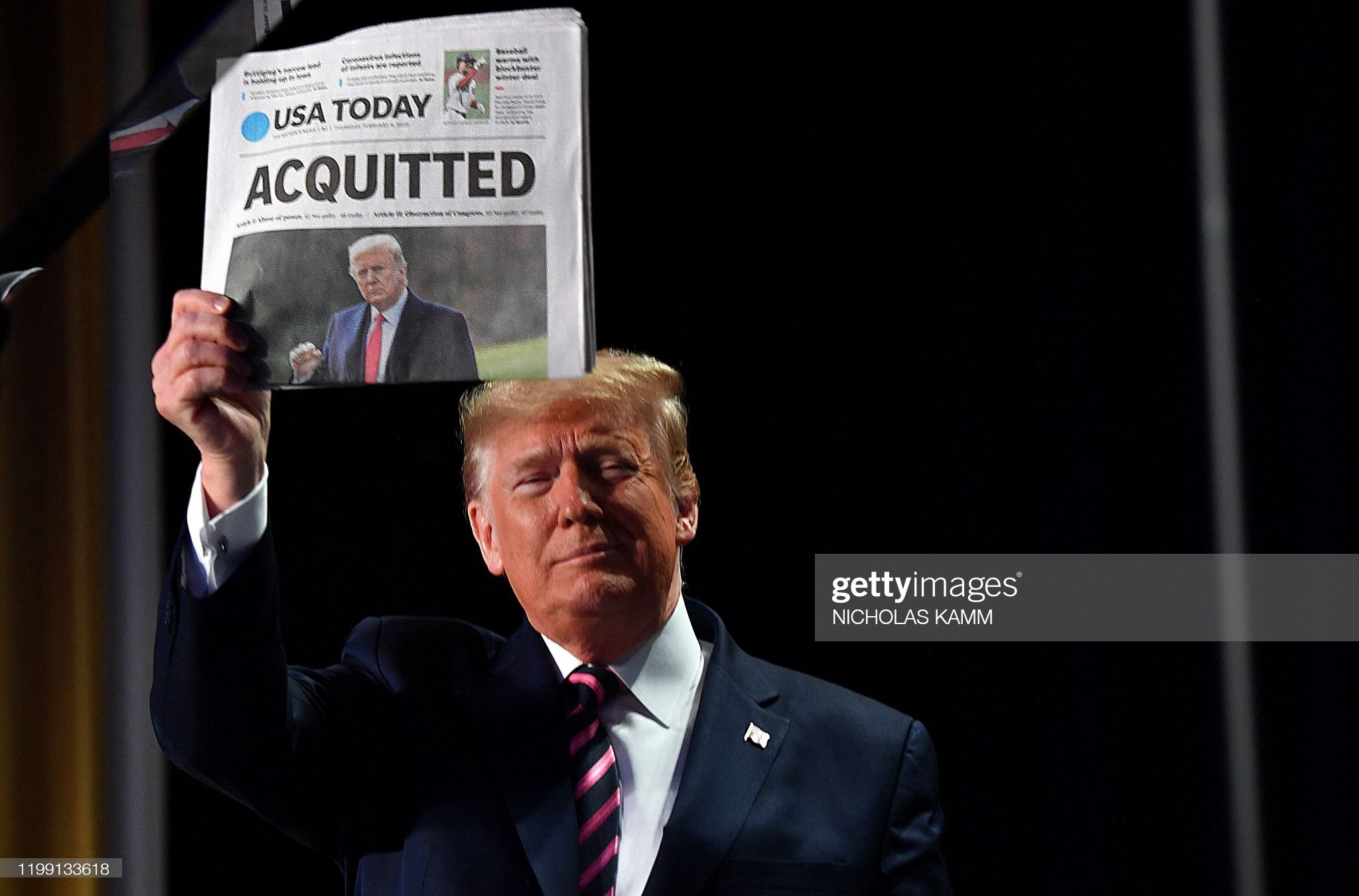 I said the primary motivation behind the impeachment was partisan bitterness and the net result of the effort would be to deepen the divide. With 20/20 hindsight, it’s hard to fault either of the two elements. Partisanship drove the Democrats in the House to impeach, and partisanship drove the Republicans in the Senate to acquit.

I warned of the risk of ‘normalising’ impeachment. ‘Abuse of power’ and ‘corrupt motives’ amounting to ‘almost bribery’ are inherently slippery and subjective and have indeed defined the standard down for mischief-making by a Republican-controlled House against a Democratic president in the future. Policy differences and character flaws are matters best left for the judgment of voters. Angry Democrats were on the lookout for impeachment from the day Trump was elected. They spent three years probing him and finally settled on his phone call with the president of Ukraine as the hook on which to hang the charge of impeachable conduct. At the end of it, few who were not already convinced of the case for Trump’s removal on 1 January 2017 were persuaded by the House proceedings and votes in December 2019.

The effort was infected by a threefold incoherence. The centrepiece of the case was that Trump had crossed the impeachment threshold in his telephone conversation with Ukraine’s president calling for Vice President (VP) Joe Biden’s dealings with Ukraine to be investigated. The nature of the quadripartite relationship between Biden, his son, Ukraine’s president and the energy company Burisma remains murky with more than a whiff of unsavoury associations. The only plausible explanation for Biden junior’s appointment to a lucrative position on Burisma’s board is leveraging the connection to VP Biden for access, influence and protection in Washington and Kiev. Inconsistently, the Democrats insisted that everything about Trump’s conduct with respect to Ukraine must be examined but nothing about the Bidens. This was justified by a classic bait-and-switch tactic. Accusations of ethical lapses on the Bidens’ part are irrelevant because no laws were broken. But there was no need to establish illegal conduct by Trump; it was morally corrupt enough to warrant removal from office. The Democrats used their numbers in the House to insist on this non-equivalency but the double standard did not escape public scrutiny.

Second, Democrats insisted they voted to impeach because of overwhelming and compelling evidence. No sooner had the House finished, however, than they began to demand new witnesses in the Senate whose testimony  was critical to clinch the case.

Third, Congress asserted the right to call witnesses and Trump asserted executive privilege to resist. This is a tussle that every president has with Congress and the dispute is typically adjudicated by the courts. At that stage the Democrats withdrew their subpoenas on the argument of time urgency, in order to eject Trump from the White House asap because he posed such an imminent threat to US national security and other interests. But, bizarrely, they then used Trump’s rejection of their subpoena requests, despite ample precedent with presidents from both parties, as evidence of obstruction of Congress. Then after the House impeachment, Speaker Nancy Pelosi delayed sending it to the Senate for a month: the matter was suddenly no longer so urgent after all. The Senate bickering was so unseemly and the outcome so predictable that the soporific hearings were a TV ratings disaster.

I warned that the impeachment effort’s focus on the murky Ukraine dealings would damage Biden. The hearings were all about Ukraine and Trump’s efforts to get Kiev to investigate what, if anything, Biden had done as VP that was improper. The end result is that, like Hillary Clinton with her missing emails scandal, Biden is left saddled with the vague suspicion of wrongdoing and moral turpitude that a presidential candidate has great difficulty shaking off. A Hill-HarissX poll in October showed 64% of Republicans, 54% of Independents and 40% of Democrats believed Hunter Biden’s business dealings in Ukraine were an important campaign issue that should be discussed. Yet the mainstream media mostly ignored it. A poll for Investor’s Daily showed 23% of Americans as more likely to vote against Biden and just 8% more likely to vote for him because of the Ukraine story. A Quinnipiac poll last month showed Biden to be behind Sanders on honesty 17%-26%. 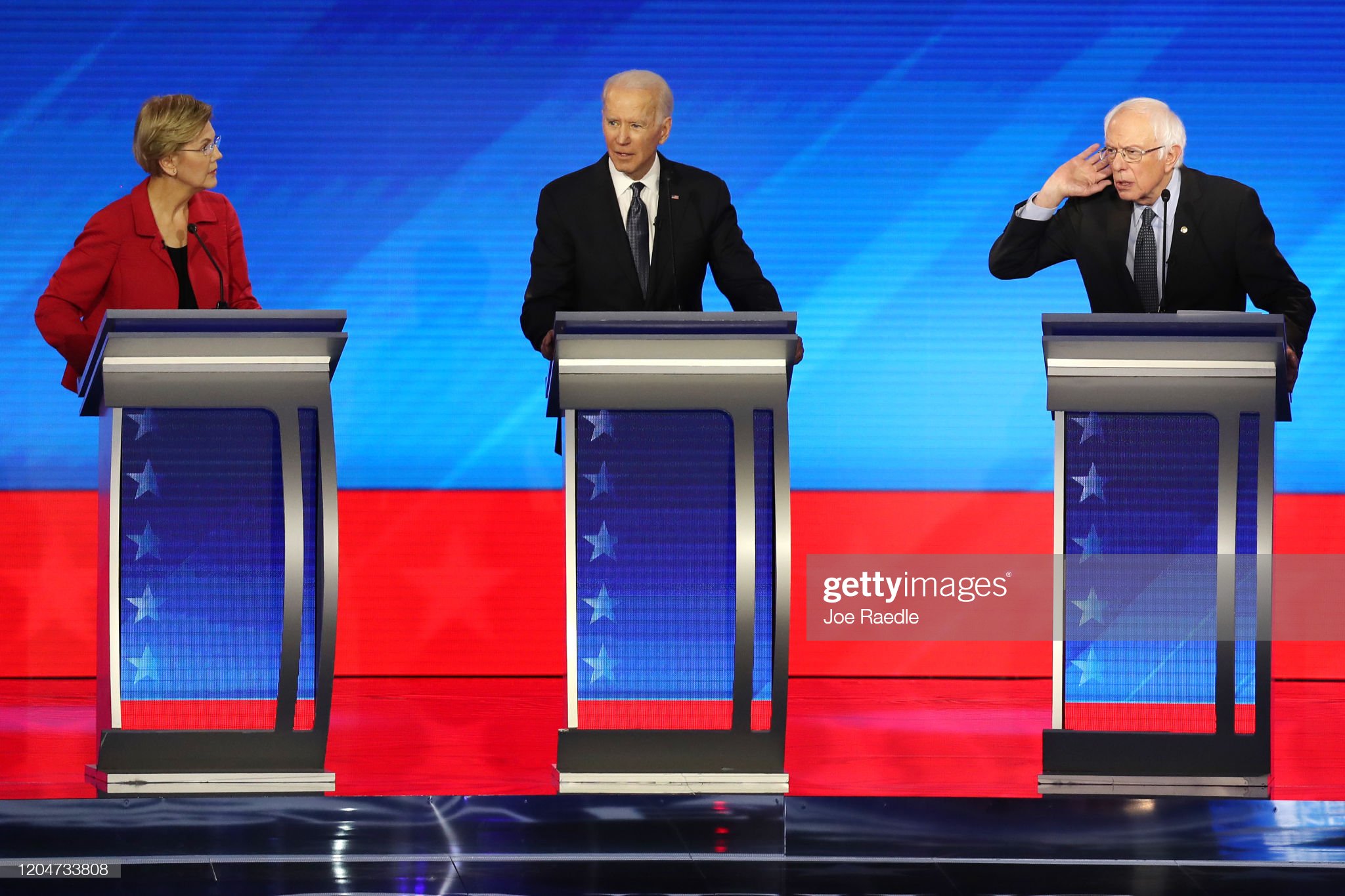 I concluded that the effort would prove counter-productive and likely benefit Trump and damage the Democrats. Sure enough, his approval rating in Gallup polls rose from around 40% when impeachment began to 49% when it finished – his highest approval level. Tellingly, the intensity of his approval climbed by 5% while strong disapproval fell by 8%. The best site for tracking the multitude of polls on a rolling basis, including the average of polls, is RealClearPolitics. The Democrats have successfully energised Trump’s base and fundraising but not their own: impeachment proceedings have been good for his coffers! Pelosi was right in her initial judgment that impeachment was not advisable without compelling reasons backed by overwhelming evidence and bipartisan support. Not one of the three criteria was met.

Most crucially, the Democrats were never able to escape the damning charge that, in their visceral dislike of a president who had been intentionally elected as a disruptive outsider to drain the DC swamp, DC insiders were hell-bent on over-ruling the vote of 63 million Americans, overturning the 2016 election, and striking the elected president from the ballot for 2020. Judged against this, their accusation that Russia had helped Trump win in 2016 and he had pressured Ukraine to tilt the 2020 election against Biden shows either chutzpah, irony or lack of self-awareness.

While the Democrats have been preoccupied with impeachment affairs of state, Trump’s been busy making a play for blacks and Latinos, among whom his support has risen by 8 points. His message is twofold: the Democrats have taken you for granted for decades and now take their cue from woke white voters; what have you got to lose by trying me out instead? Don’t just focus on my rhetoric, but look at my record in creating employment for you and raising your family incomes.

At this point the election is Trump’s to lose. After three years of vilification by much of the media, the hijacking of the president’s agenda by the Mueller investigation that turned up empty, months of high-octane impeachment hearings with 17 witnesses and hundreds of documents, and two weeks of televised Senate debate, the political story so far is aptly summarised in the title of an editorial in Canada’s Globe and Mail: ‘Acquitted by the Senate, high in the polls, his foes in disarray’. Trump’s base is energised, his supporters are emboldened, his opponents are divided and frustrated, and the Democratic party stuffed up counting in Iowa so spectacularly that a major campaign theme will surely be: they can’t even run their own party in a small state, can they be trusted to run the country?

What next for Democrats? 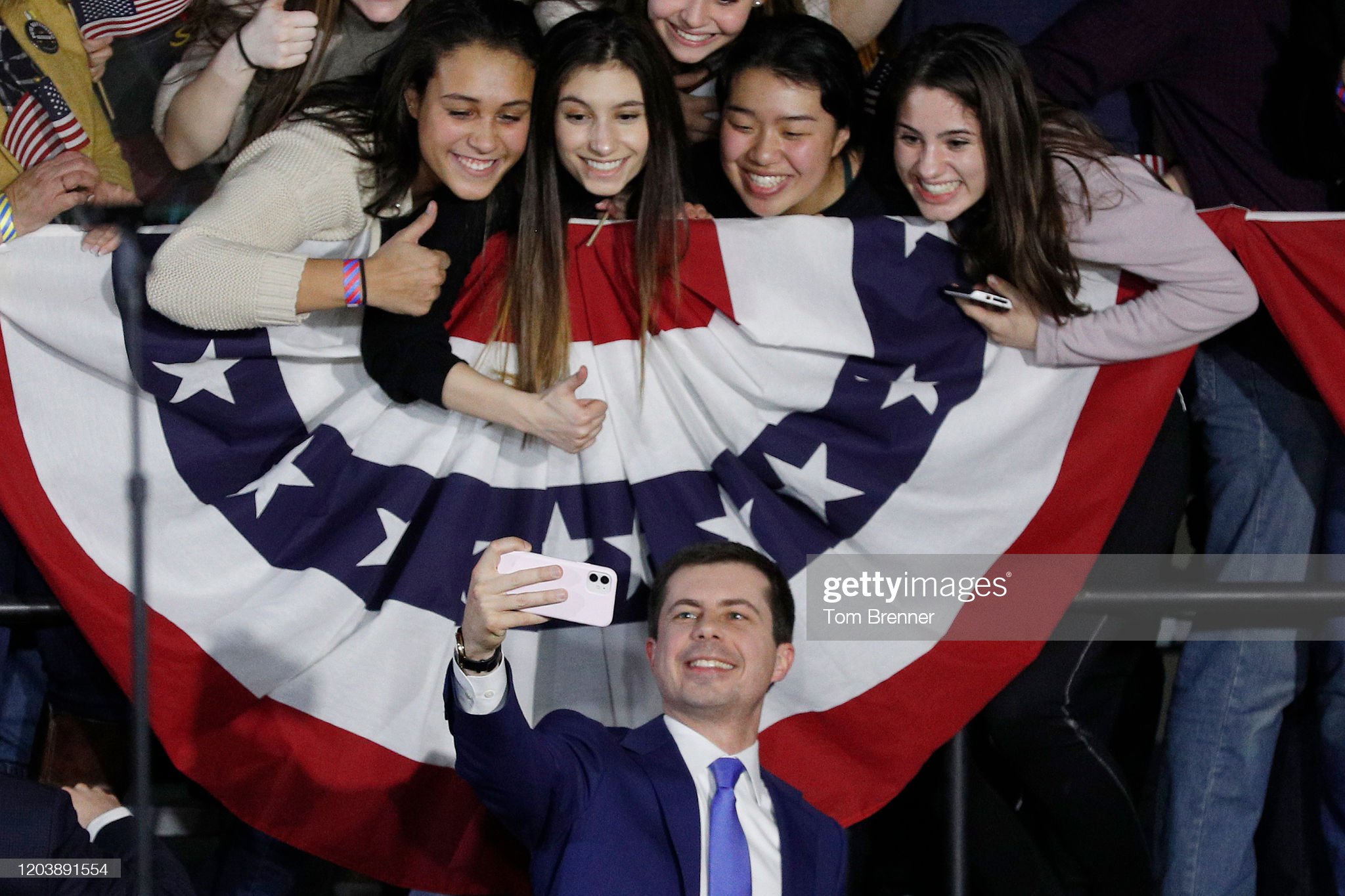 So where does the Democratic primary contest stand after the fiasco of the Iowa caucus and the first primary in New Hampshire? Biden, a fading fourth in Iowa and forlorn fifth in New Hampshire, is a political dead man walking. Bernie Sanders is in pole position. He has huge advantages in a battle-tested national organisation, passionate following, fundraising, and credibility from his 2016 campaign. It’s hard to see Elizabeth Warren bouncing back as a serious contender from the left of the party. The biggest threat to Sanders might prove to be Michael Bloomberg. The party might hit the panic button in fear at an epidemic of a new strain of Bernievirus Sandersitis similar to the outbreak that felled the Corbyn-led UK Labour Party. If the party hierarchy coalesces around Bloomberg to deny Sanders the prize once again, the legion of Sandersnistas would desert the party come November. Meanwhile Pete Buttigieg and Amy Klobuchar will divide the moderate vote for the next set of primaries. Buttigieg finished a strong second, but his appeal and staying power across the broader Democratic rainbow coalition, along with his record and previous statements, will only be subjected to the blowtorch now that he is a serious contender. 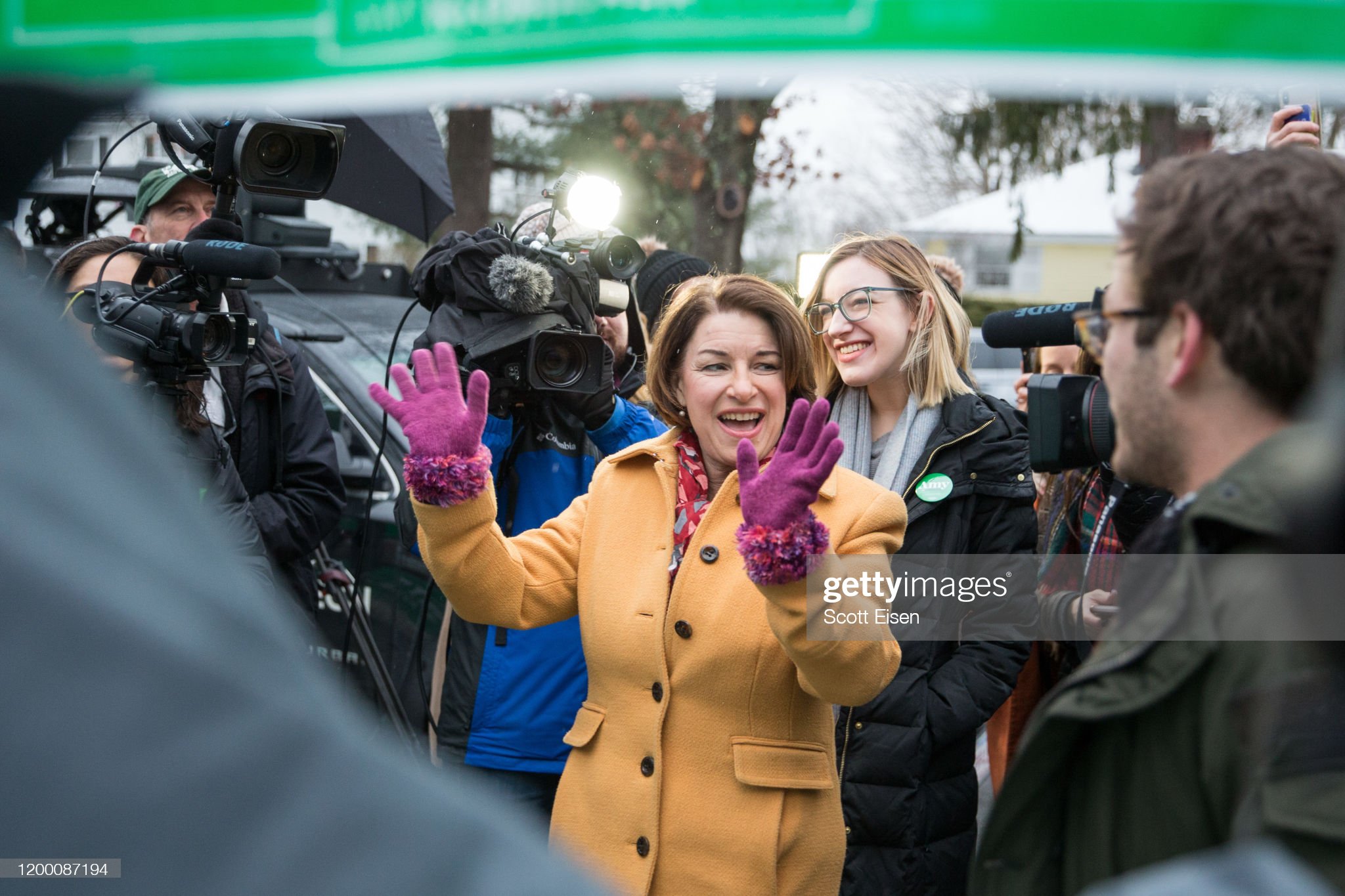 Klobuchar is the biggest winner from New Hampshire and will likely get the biggest boost from the collapsing Biden candidacy. On the one hand, she too will get an intense scrutiny so far not applied to her candidacy. On the other hand, if Warren goes into a freefall, Klobuchar is the last woman standing. Should she continue to perform well in future debates and her record holds up or even gets increasingly favourable attention, she could well triumph. Alternatively, she could be a very attractive running mate for either Sanders or Bloomberg as the Democratic nominee, compensating for their weaknesses and complementing their strengths. She would add gender balance, geographical breadth and philosophical ballast to the ticket. On the face of it, either combination could offer real competition to Trump in November.

Ramesh Thakur is an emeritus professor in the Crawford School of Public Policy, Australian National University.