How Anthony Albanese as Prime Minister could rewrite the script 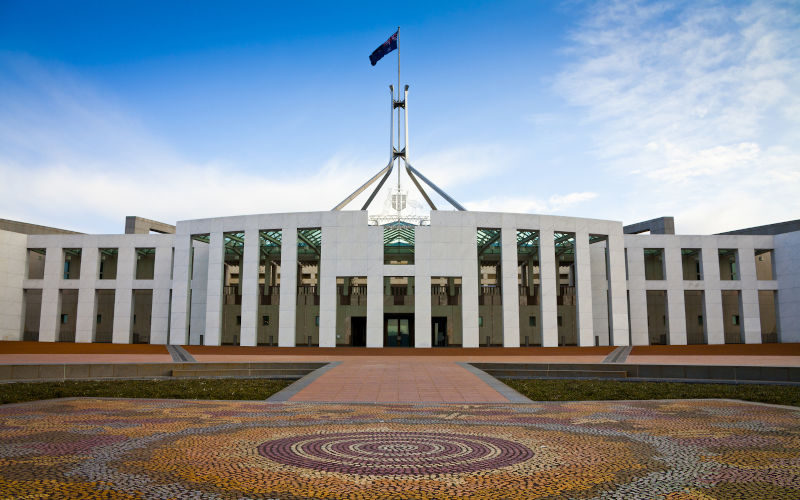 Guidance for the minsters of the new government in Parliament House. Image: iStock

Below is a repost of articles which we posted earlier on guidance for a new government on important policies.

If I were the Minister for Health. John Menadue
I would progressively wind back and eliminate the $14b pa taxpayer subsidy for Private Health Insurance and use that very large sum to fund the inclusion of dental care within Medicare and increase the funding to the states for expanded specialist services in outpatient clinics at public hospitals. Read More

If I were Minister for Defence in the incoming government. Nick Deane
The primary requirement is the courage to tell the nation that it it can and should stand up on its own two feet and shed its ‘fear of abandonment’, once and for all. Read more

What ministers should do – Human Rights.Ben Saul.
Human rights experts have welcomed Labor’s plan to restore merit appointments to the Australian Human Rights Commission, and to appoint a global ambassador for human rights. Nine years of partisan ‘captain’s picks’ by the Coalition government have shredded the Commission’s impartiality and subdued its voice as a champion of the vulnerable. Its funding has also been decimated. Read more

If I were the Federal Minister for Health. Mary Chiarella.
I would introduce a new way of paying health providers, address the Commonwealth/State blame game and reform the health workforce. Read more

What I would do if I were the Minister for Health and Ageing in the next government. Stephen Duckett.
Unfortunately, outgoing Health Minister Greg Hunt leaves behind a huge mess. He was the most political of ministers: politicising announcements for listing decisions on the Pharmaceutical Benefits Scheme (PBS) and prioritising the political in decisions about vaccine procurement and rollout. He also sidelined the Department of Health and spent millions on expensive consultants. Read more

What Ministers in a new Government should do – climate change, China-US relations and our region. Geoff Miller.
Three priority areas for the new Australian Government to be elected on May 21 are climate change; a strategy for the Asia-Pacific, including relations between China, the US and ourselves; and greater attention to the region around us, including in particular South East Asia and the South Pacific, where we should work closely with New Zealand. Read more

Our democracy is decaying from within. A repost from 16 September 2021. John Menadue.
With the loss of trust in our political institutions and politicians today, we need a political summit to build consensus on democratic reform and the restoration of trust. Such a proposal, if carefully explained and implemented, could produce real political and policy dividends for its advocates and more importantly, for Australia. Read more

Privatisation and the hollowing out of Medicare by the Morrison Government. John Menadue.
The Coalition has for years been undermining Medicare. Bob Hawke was correct at the last election when he said that the Coalition was aiming to privatise Medicare. It was not a scare tactic as some unthinking journalists keep saying. The Coalition has been privatising by stealth for years our universal health care system. Read more

What would I do if I were the Minister for Climate Change?  Ralph Evans.
For too long, the nine Australian governments have been pursuing inconsistent agendas on emissions and energy. Usually, the. states and territories have led (in some notable cases under Coalition governments), while the Commonwealth has lagged badly. Read more

Childcare: Budgets and an Election. Berenice Nyland.
In brief, childcare, especially long day care, has become highly lucrative for big business. About 80% of revenue comes from the Australian taxpayers. This corporate model means that 100s of millions are distributed to share-holders each year and a number of the largest companies pay no tax. Read more

If I were the Minister for Education, these are the three priority things I would do for schools. Chris Bonnor.
If any serious policy issues are aired during this election, it’s unlikely school education will feature. Yet our framework of schools is an evolving disaster. And while there are critical differences between the parties, none of the policy offerings address the root causes of our educational malaise. Read more

Priority actions for the next federal housing minister. Hal Pawson.
Housing is yet again up there as a major concern in this year’s federal election debate. Given the rising cost of putting a roof over your head in today’s Australia, that’s hardly surprising. Buying a home will now set you back 30% more than at the start of the Morrison government’s current term in office. Meanwhile, rent increases have escalated to their highest levels for more than a decade. Read more

If I were the Minister for Employment in the next government these are the three priority things I would do. David Peetz.
The institutions that regulate the labour market are no longer properly functional. Despite the high quality and impartial behaviour of some key people in the Fair Work Commission, it has (like other bodies such as the Administrative Appeals Tribunal) been damaged through a slew of partisan appointments. Interpretations of the Fair Work Act become more favourable to employers, making it barely legal for workers to undertake legal strike action. A significant number of workers are now outside the coverage of labour law and its associated institutions. The labour inspectorate fails to adequately enforce the minimum standards that should govern all employees’ work. Read more

If I were the Attorney General in the next government I would have three priorities. Greg Barns.
Is it too much to hope that after the May 21 election we see an AG who energetically pursues three priority initiatives; A treaty with Indigenous Australia and a republic, a national human rights charter, and a substantial reduction in the cost of justice. Read more

We cannot expect the Minister for Women to lead the changes for gender equality. Eva Cox.
A federal election in sight always creates feminist optimistic hopes that long-term inequities will be on agendas and addressed. But gender equality policy making in 2022 isn’t working. Read more

Fixing Immigration: five things an incoming Labor government could do. Peter Hughes.
Labor, if elected, has a big job ahead of it in fixing the immigration shambles that the Coalition has created in nearly 9 years of office. Read more

If I were the Minister responsible for Higher Education in the next government these would be my priorities. Adam Lucas, Alessandro  Pelizzon
What should be the top priorities of any incoming Federal Government concerning tertiary education in Australia after decades of cost-cutting, restructuring and corporatisation? Read more

To the next minister for climate change & energy: The execution plan for climate mobilisation. Chris Barrie, Ian Dunlop.
Climate decisions taken here and globally within the next three years, the term of the new government, will determine the future of humanity. Climate is not a single issue. It is going to change every aspect of our society, so we cannot allow a continuation of the lies and deception around climate policy which the two-party system perpetuates. Read more

If I were the minister for the public service in a new government. Andrew Podger.
Improving the capability of the APS, and making best use of it, is the responsibility of all ministers with the Prime Minister being responsible for setting the overall climate. Read more

The Coalition is guaranteeing essential services and lower tax. We can’t have both. Michael Keating.
In the midst of Labor’s campaign about the cost of living, the Coalition has zeroed in on one of those costs – taxes – and guaranteed to stop them rising. Read more

Notes for the new minister: arts and culture on a knife edge. Justin O’Connor, Emma Webb, Tully Barnett, Julian Meyrick.
Australia is at a tipping point. Our democracy is at stake, and cultural policy (or lack thereof), is an integral part of the crisis. Forty years of hollowing out the public sector, degrading the public service, and a winner-takes-all attitude to the electoral process fuelled it. The result is Australia’s embrace of authoritarian ‘managed democracy’, and the disappearance of the line between the needs of the public good and the demands of big donors––especially, but not limited to, the fossil fuel industries. Read more

Government Integrity and an ICAC. Michael Keating.
There is a legislated process prescribing how government grants should be administered, but it clearly is not being followed and we need an integrity commission to enforce it. Read more

Morrison on a Federal Integrity Commission is not credible. Spencer Zifcak.
The Prime Minister has broken his promise to adopt legislation establishing a Federal Integrity Commission. The decision is not all that surprising. It has been clear for a long time that the Government does not favour a federal anti-corruption body. What is interesting, however, is how impoverished the reasons that the Prime Minister has given for ditching a commission actually are. Read more

Our health system: The dream and the reality. Tim Woodruff.
How would it be to have a health system which delivered timely high quality care to everyone, with such a system emphasising that prevention of illness and promotion of health at every level to improve health, as well as potentially increasing productivity? How would it be to have a society which recognised that poor health is frequently a result of structural inequalities in that society? Read more

If I were Foreign Minister in the new government. Cavan Hogue.
Australia has always been a follower in foreign and defence policy. When the British Lion lost its teeth we turned to the American Eagle which is currently losing its feathers. Read more

If I were the Minister for Immigration policy in the next parliament. Abul Rizvi.
Under the Morrison Government we have seen the biggest wave of asylum seeker applications in Australia ever – at over 100,000. Coming by air it is almost twice as big as the fourth wave under the Rudd/Gillard Governments. Read more

What a new Minister should do about trade policies and trade justice . Timothy Ginty.
As you go to the polling booth on May 21, your candidates will be asking for your vote to repair an economy hit by the COVID-19 pandemic, floods, and fire. But before you entrust them with your vote, you should also ask how their party’s trade policies will help or hinder the national recovery. Read more

Healthcare reform is not featuring in the current election. John Dwyer.
Of course a pandemic associated with a sudden and large demand for admission, and often Intensive care, would strain any system, but even before Covid-19 placed huge stresses on hospitals, we were struggling to meet demand. The demand for residential aged care cannot be met. There are evidence based strategies to tackle both these problems but so far the election rhetoric contains no assurances that our politicians are planning to embrace them. Read more

If I were the Prime Minister – Taking the climate emergency seriously. Peter Christoff.
The Black Summer bushfires, the Millennium Drought, the dying Great Barrier Reef, this year’s floods. Australia has experienced unprecedented environmental disasters in recent times. Each was amplified by global warming. Scientific reports indicate worse may still to come. Read more

Albanese and minimum wages. Should the government support a 5.1% increase ?  David Peetz.
Anthony Albanese’s comment that he ‘absolutely’ would support a wage increase of at least 5.1%, so that workers could keep up with inflation, led to predictable controversy on the campaign trail. Read more